A possible Spanish origin for "lunch"

I have recently discovered the words of José María Pemán from 1941 regarding the origin of the English word lunch. My translation (sorry):

Wellington's Englishmen arrive in Spain, they fall in love with the Spanish custom of having a drink and some trifles at about eleven o'clock in the morning, that is why it was called "tomar las once"1, they make it their custom and take it to England, they disfigure the name omitting vowels, and from l'once they end up with lunch.

1Literally, "to have elevens". To have something at eleven o'clock.

This tries to explain why in the last quarter of the 19th century the word lunch was adopted in Spain as an exotic custom, even though that custom was something we had been doing for centuries.

But my question is, do José María Pemán's words have any credibility? As far as I know, lunch is a shortened form for luncheon which is of uncertain origin but it was already used in the 17th century. I am kind of answering my own question, but is there any possible link between the two words, like a boost in the usage of "lunch" based on the Spanish expression or custom? Or maybe the Spanish expression gave birth to another English word apart from lunch?

José María Pemán's speech can be read here (PDF, in Spanish). See page 53 of the PDF (page 435 of the original document).

The possible Spanish origin of lunch is lonja 'slice' which comes from French longe 'long' and ultimately from Latin longus 'long'. The original and obsolete sense of lunch from OED "A piece, a thick piece; a hunch or hunk." is directly related to this origin.

The etymology of "lunch" from OED:

Perhaps evolved < lump n.1, on the analogy of the apparent relation between hump and hunch, bump and bunch. Compare ‘Lounge, a large lump, as of bread or cheese’ (Brockett N. Country Words, ed. 2, 1829).

It is curious that the word first appears as a rendering of the (at that time) like-sounding Spanish lonja slice of ham. luncheon n., commonly believed to be a derivative of lunch , occurs in our quots. 11 years earlier, with its present spelling. In sense 2 lunch was an abbreviation of luncheon, first appearing about 1829, when it was regarded either as a vulgarism or as a fashionable affectation.

The second and usual sense of "lunch" in OED:

a. A synonym of luncheon n. 2. (Now the usual word except in specially formal use, though formerly objected to as vulgar.) Also: a light meal at any time of the day.

Eric Partridge strongly believes that the origin of lunch and luncheon is the Spanish lonja and says that lunch is earlier than luncheon. Here is a relevant excerpt from his book Word, Words Words!: 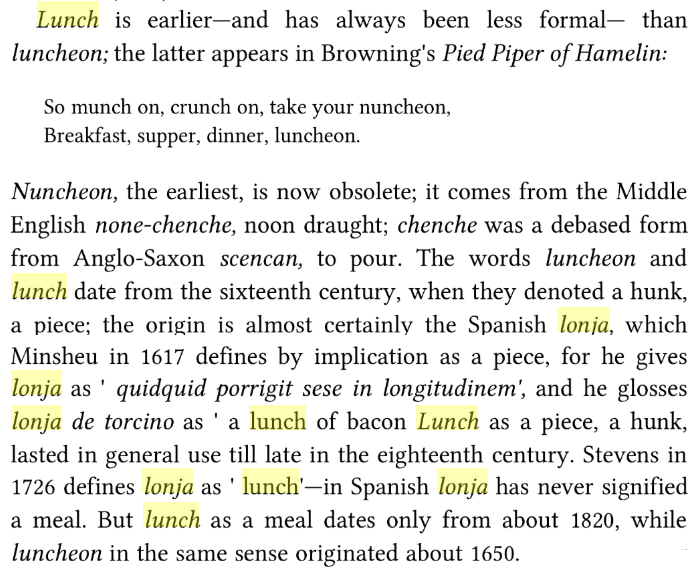 Ernest Weekley and Samuel Johnson mention the Spanish lonja for the origin of lunch in their etymology dictionaries as well.

The similar word lounge appears to share the same origin as lunch. OED mentions the North England dialect word lounge (meaning a large lump, as of bread or cheese) which is connected to the obsolete sense of lunch and to Spanish lonja.

OED says the noun lounge is from the verb lounge, and the origin is mentioned as "Of obscure origin; perhaps suggested by lungis n.". Lungis shares the same origin as Spanish lonja.

The etymology of lungis from OED:

Not the answer you're looking for? Browse other questions tagged etymology nouns or ask your own question.