There are some examples of verbs in English that can be negated with not:

However it seems that this statement must exist in isolation and it is incorrect in modern English to follow this with a statement:

Another common example is:

We need not call the police

This sounds natural in modern English. However in general this type of negation is not possible:

I drive not to work

Are there any rules on when this type of negation is possible in modern English? Can you give any more examples of verbs for which this is possible?

There are other verbs that follow this pattern, including:

(Here is an article that explains their use.)

However, I disagree that in "I think not" the "not" is negating "think" – rather, it's negating the (implicit) proposition that the speaker doesn't believe is true.

For one thing, the equivalent with "don't" is "I don't think so", where the so is clearly referring back to the proposition being discussed. This can be used in the positive, too, as "I think so"; the "not" replaces the "so" in the negative case. So, I'd say that the sentence

(Will he arrive on time?) I think not.

is not equivalent to

I don't think he will arrive on time.

I think he will not arrive on time.

In this case the meaning is almost identical, but for some of the other verbs it is not, and for example:

(Will he arrive on time?) I'm afraid not.

is definitely equivalent to

I'm afraid he will not arrive on time.

I'm not afraid he will arrive on time.

In recent use, esp. in I kid you not and variants.

F. T. Visser ( Hist. Syntax Eng. Lang. (1969) III. §1441) observes that from the beginning of the modern English period certain verbs tended to continue to be used in this construction rather than the do not construction, the main ones being care, doubt, know, mistake, trow, and wot.

That brings us to another relevant point, which is that this construction of not was more common in archaic use. A few examples from the OED citations show how it was applied earlier:

As longe as the significacion bode, it hurted not.

With holy father sits not with such thinges to mell.

In sentences such as I think not, the word not is a proform standing in for a negated subordinate clause. It is not negating the verb think. Rather it is the complement of that verb. We use not in the same places where we use so to represent positive subordinate clauses.

Because not represents a subordinate clause here, it does not make the larger sentence negative.

The word not is often used to negate clauses. When occurring in finite clauses, it occurs after the auxiliary verb (apart from in some types of question, where the auxiliary moves to the front of the clause leaving the word not in situ).

If there is no auxiliary verb, we need to insert the dummy auxiliary, do:

The reason that we can use not in the Original Poster's sentence We need not tell the police is that the verb need is an auxiliary verb here. We can show this by using a contraction:

Notice that this whole sentence is therefore negative. We can show this by using a question tag. Negative sentences always take positive tags:

In the example above the pronoun he is standing in for the previously mentioned phrase that man in the red t-shirt. We also have proforms, such as the word there, for example, which stand in for whole preposition phrases:

In the example above the proform there is standing in for the at-preposition phrase at the bottom of the valley.

If we want to use a proform for a whole clause, we often use the proform so.

In the examples above we can see that the word so is replacing a clause as the complement of the verb said. The clause that has been replaced means something like he has finished his work.

Notice that although not represents a negative subordinate clause here, it doesn't make the larger sentence negative. We can show this by putting a negative tag at the end of the sentence:

In the Original Poster's sentence, I think not, the word not is a pro-clause item standing in for a negative clause. It represents a subordinate clause functioning as the complement of the verb think. It does not negate the verb think or make the larger sentence negative. We can use not or so as a proform with many other verbs that take subordinate clauses.

Below is an excerpt on pro-form so and not from The Cambridge Grammar of the English Language (Huddleston & Pullum, 2002 p.849).

Excerpt from the Cambridge Grammar of the English Language: 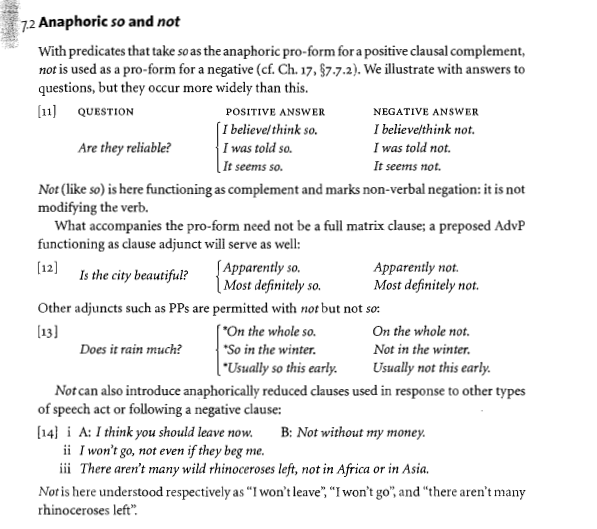 I would say that the usual form of negation is to include the do as an auxiliary verb.

"I think not" is a colloquialism, but one that implies British upper classes and has grown from there into acceptable usage but usually in an amusing way. Unless you actually are posh, in which case you may use it unironically.

"Need" is different, but I see it as part of the group of verbs like should, would, could, do, and have. This must form a closed group of verbs of some description. The other verbs are often auxiliary verbs while need is not, so maybe that is not it afterall.

Edit: a comment from @Shoe to the original post pointed out that these are modal and semi-modal forms.

Auxiliary verbs are negated directly, while non-auxiliary cannot be negated directly. Do is a dummy auxiliary verb; it is put into sentences simply to have an auxiliary verb to negate. For instance, it's not grammatical to say "I eat not broccoli", so the word "do" is put in that sentence just so there will a verb that can be negated: "I do not eat broccoli". Other common auxiliary verbs are be, have, can, must, and will. See https://en.wikipedia.org/wiki/Auxiliary_verb for more. Note that with some auxiliary verbs, there is some ambiguity as to what is being negated. For instance, does "I can not go" mean "Not going is something that I can do", or "Going is not something that I can do"? The word "cannot" helps make it clear that the latter is meant. Contractions can also serve this purpose: "I daren't go" makes it clear that you don't dare to go, not that you dare to not go.

There are also other verbs for which direction negation is permissible with varying degrees of archaicness, such as ask, speak, go, send etc.

Not the answer you're looking for? Browse other questions tagged grammaticality or ask your own question.

3
Comparisons: "so [adjective/adverb] as" or "as [adjective/adverb] as"
0
The Nissan manual or the Nissan's manual?
4
"a question impossible to answer" and "a situation possible to arise" Are they grammatical?
7
"He's good police"
13
Can anyone give me examples of the relative-determinative 'which'?
3
Placement of “anymore” with respect to other complements, as in "not possible anymore to …"