I found this definition on some dictionaries, but except Pocket Oxford, they're all British and rather old (up to 1974), but I can't find it on modern dictionaries.

EDIT: below is added after the comments by @Unrelated, @Clare and the answer by @Laurel.

This definition is also given in Merriam-Webster, which is American. (OTOH MW says "sweet" can mean "hard candy" in UK, which I've never seen anywhere else.)

Dictionaries (and other usages) without this definition:

Not sure what dictionary you're using, but mine has this entry for "candy":

The blog Separated by a Common Language gives a great explanation:

In BrE, candy refers to things that are made from sugar that's been melted (usually with water and some flavo(u)ring) and resolidified in some form, including boiled sweets (AmE = hard candy) and candy floss (AmE = cotton candy).

So I'll fess up and candidly admit, I used to live in the UK and never once did I utter the word candy to talk about sweets, but that was a hundred years ago and since then it's possible that British children have become more familiar with the term candy, meaning sweets, in all its myriad of forms.

Today, I don't know if Brits say candy or hard candy in place of hard-boiled sweets, but they definitely say candy floss (the sickly sticky pinky fluff on a stick). And instead of calling it Brighton rock, they might say candy cane; the stripy stick made from granulated sugar, shaped like a walking stick (a cane), but the place where Brits buy their sugary snacks is called a sweet shop, although candy store seems to be close behind (which is odd!). If you can't find a sweet shop, pop into a newsagent's, they'll have a rack of sweets and chocolates opposite the cash till or right beside the counter.

If we swim across the pond, it is the candy store which is most used by American English speakers, according to Google Ngram that is.

Finally, Wikipedia seems to confirm my earlier suspicion that boiled sweets are not synonymous with hard candy. They list it under
Glossary of British terms not widely used in the United States

The sticky toffee apple of my childhood is, I discover, commonly referred to as candy apple or caramel apple (also pronounced as /ˈkɑrml/) in the US. 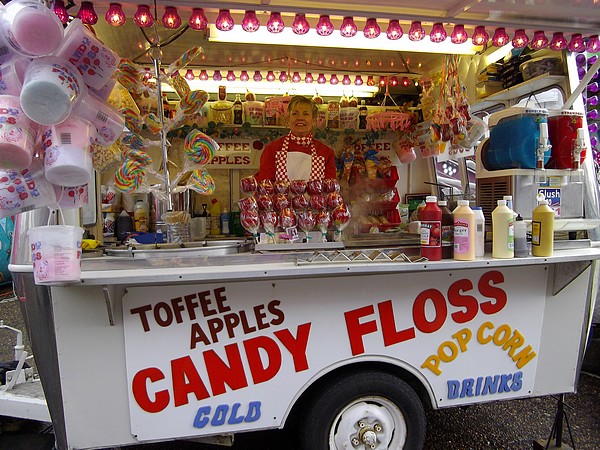 1
Is “curate the market” common usage of “curate”?
4
Is the usage of “night and day” as “completely different” very common?
7
AmEng equivalent for BrEng "decorator"
8
How did an egg and cheese dish come to be known as "Woodchuck(s)"?
9
What does “presidential president” mean?
0
Can "hurl" be used as a noun in British English?
11
Trying to understand the nuances between ox, steer and bullock
5
Why don't dictionaries list "burnout" as spinning tires?
1
How is "composite" as a verb pronounced in British English?