How did an egg and cheese dish come to be known as "Woodchuck(s)"?

Our family just finished our traditional post-Easter dinner of colorful Woodchucks, and once again I am wondering about the origin of this odd recipe name. Some searching on the internet has turned up various recipes similar to my family's. There are variations, but all feature the basics of hard boiled eggs sliced into a cheese (or occasionally white cream) sauce and a distinct lack of actual woodchuck1. (Common variations include the addition of various herbs, vegetables, and/or tomato soup, and serving over various forms of noodles or bread.) You can see one such recipe here and another here.

The first clue I found for the name's origin is in Yankee Magazine's New England Today. A 2007 article posits two hypotheses for the origin of the recipe—a reader who contributed the recipe in 1966 claimed that 18th century shipwreck survivors marooned on an island with a lot of cheese invented the dish, or perhaps instead it is a 1930s variation on Welsh rarebit2—but doesn't offer an explanation of the name. The second theory may perhaps hold a clue, since both "Welsh rarebit" and "woodchucks" are cheese-based dishes notable for the absence of the small furry animal implied in their names.

In fact, the famous cookery book Joy of Cooking (originally published in 1931; the version I was able to find online is from 1975) includes a recipe for Tomato Rarebit or woodchuck, directly connecting rarebit and woodchuck.

Another hint I've found about the origins of the name comes from a video demonstrating how to make "Chinese Woodchucks". One of the makers of the video says (starting around 30 seconds) that his mother found the recipe in a newspaper in the 1960s or 1970s, and that it came from former mayor of Chicago Richard Daly. The time frame is similar to the Yankee Magazine recipe contribution, and a Chicago connection would make sense geographically for my own family's acquisition of the recipe. Several of the recipes that I found online recommended serving it over lo mein or "Chinese" noodles.

If the recipe is in fact a variation on Welsh rarebit, the name Chinese woodchuck could be a sort of snowclone of the form [deprecated? nationality] [deprecated? food animal]. The OED lists Scottish rabbit3 as a dish related to Welsh rabbit/rarebit, and one of its attestations mentions "English" and "Irish" versions of the dish as well, so there is some precedent for such a variation. However, the Mayor Daly story doesn't seem to be common to many of the sources I've found, and there are many "woodchuck" recipes that seem to predate the Chinese version.

Of course the name may still be a variation or evolution along these lines, even if it wasn't originally this form exactly. For example, perhaps it was meant to be an American version of Welsh rarebit, on the theory that the woodchuck is a uniquely North American rodent.4 This could make sense if it is a term/dish that originated in or is somehow primarily associated with North America.

Just to be clear, I'm not asking about the origins of the recipe or the main meaning of the word woodchuck, just how the term woodchuck came to be used for this kind of dish. I'm most interested in when, where, and especially how the term arose.

1 Woodchuck is another name for the groundhog of Groundhog Day fame, a North American type of marmot. See Wikipedia.

2 The OED says of Welsh rarebit:

Etymology: Alteration of Welsh rabbit n., apparently after rare adj.1 and bit n.1, probably with the sense ‘delicacy’.
There is no evidence of the independent use of a simplex rarebit , except later as a shortening of this compound (see rarebit n.). ("Welsh rarebit, n." OED Online. Oxford University Press, March 2017.)

On Welsh rabbit's etymology it has only

Unfortunately, the OED has no information about the recipe version of woodchuck.

4 I am aware that rabbits aren't actually rodents; however, if this label does date from the early twentieth century, it is likely that whoever chose it would not have made that distinction. Per Oxford Dictionaries,

Until the early 20th century, zoologists classified the rabbit and other lagomorphs (as members of the order Lagomorpha are known) within the order Rodentia (rodents), which includes rats, mice, squirrels, and marmots.

It appears that the name of the American creamy cheese and egg sauce, known as woodchuck, was inspired by the evergreen Welsh rarebit, a ‘gourmet’ dish which famously contains no trace of rabbit. Just as Welsh rarebit contains no meat, neither does woodchuck whose recipe harks back as far as 1915. It therefore seems plausible that American cooks, in a similar spirit of irony, ennobled their variation with the name of a giant North American squirrel. The American rarebit dish already existed, (1913 recipe) so there was little point in using the same animal's name.

The origin of Welsh rarebit

[…] A more likely derivation of the name is that Welsh in the seventeenth and eighteenth centuries was used as a patronizingly humorous epithet for any inferior grade or variety of article, or for a substitute for the real thing (thus a Welsh pearl was one of poor quality, possibly counterfeit, and to use a Welsh comb was to comb one’s hair with one’s fingers).

Welsh rabbit may therefore have started life as a dish resorted to when meat was not available.

The first record of the word comes in John Byron’s Literary Remains (1725): ‘I did not eat of cold beef, but of Welsh rabbit and stewed cheese.’

Welsh rabbit has of course produced one of the great linguistic causes célèbres of gastronomy with its genteel variant Welsh rarebit. There is little doubt that rabbit is the original form, and that rarebit (first recorded in 1781) is an attempt to folk-etymologize it—that is, to reinterpret the odd and inappropriate-sounding rabbit as something more fitting to the dish.

Although the term is often used simply for a slice of bread topped with cheese and put under the grill, the fully-fledged Welsh rabbit is a more complicated affair, with several variations: the cheese (classically Cheddar or Double Gloucester, by the way) can be mixed with butter or mustard, beer or wine, and it can be pre-melted and poured over the toast rather than grilled. And then of course there are all the other rabbits that have followed in the wake of the Welsh: buck rabbit is the best known (Welsh rabbit with a poached egg on top), but there are also American rabbit (with whisked egg whites), English rabbit (with red wine), Irish rabbit (with onions, gherkins, vinegar, and herbs), and Yorkshire rabbit (topped with bacon and a poached egg).

From rarebit to woodchuck

Perhaps emigrants from the British isles saw a physical similarity between the North American Marmot, the woodchuck, and its European counterpart, the humble rabbit. Indeed once decapitated, a skinned woodchuck and rabbit look remarkably alike. At first glance, I wouldn't be able to tell the difference between the two, and I have cooked a few rabbit dishes in my day. Furthermore, their taste is said to be also similar. 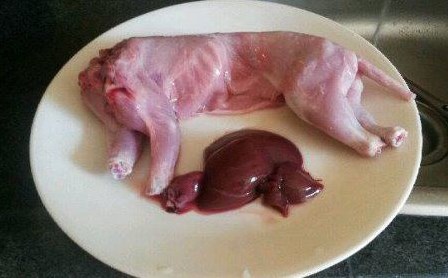 The meat tastes more like squirrel or rabbit than anything else – they are all rodents, after all. 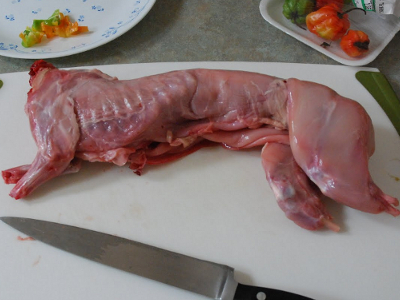 Which is which? The first image shows a skinned woodchuck.

To whet our appetites…

These following links confirm that woodchuck meat is comestible, in fact one can find several North American recipes online; here, here and here.

I think this probably explains where the rarebit connection is derived.

The earliest example of the woodchuck recipe in print is dated February 03, 1915 from a newspaper called Rock Island Argus, in Illinois. 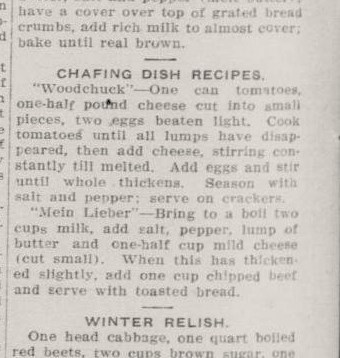 The ingredients are: One can tomatoes, one-half pound cheese ... two eggs beaten light. [...] salt and pepper; serve on crackers. It's interesting to note that the author used quote marks around “Woodchuck”, which suggests that the name of the dish was in its infancy.

From The Canadian Magazine, dated 1936

Even very simple food takes on a party air when it bubbles in a copper dish, so you need not fear serving such old favourites as Woodchuck and English Monkey and Sardine Rarebit, those favourites of college days.

Woodchuck
1 can of tomatoes, ½ lb. Canadian cheese cut in small pieces, 2 eggs (beaten until light) , salt, pepper and dash of paprika. Put tomatoes through a rather coarse sieve, add cheese and cook, stirring constantly until cheese is melted. Add eggs slowly and stir until the mixture bubbles. Season to taste and serve on crackers.

The recipe from Joy of Cooking (link provided by the OP), 1962, has the following ingredients:

The following is a modern variation of Buck rarebit. Note, the addition of poached eggs. 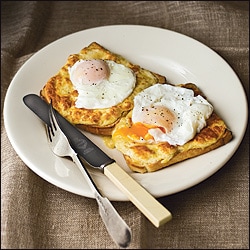 Image and recipe via the British paper, the Telegraph

Considering that the woodchuck involves hard-boiled eggs, and Welsh Rabbit does not, then a better match for the dish is the "Scotch Woodcock."

Scotch Woodcock which is nice either for breakfast luncheon or petit souper It consists of hard boiled eggs chopped up mixed with a few teaspoonfuls of good anchovy sauce and then laid on slices of hot buttered toast.

So, "woodchuck" is possibly an eggcorn (a cornish egg?) for woodcock. Perhaps it is intentional: the few people who mention woodchucks rarely mention sardines.

Not the answer you're looking for? Browse other questions tagged etymology north-american-english food or ask your own question.