None of many official and authoritative dictionaries I checked online describe "burnout" as does this Wikipedia article. What I'm talking about is this: 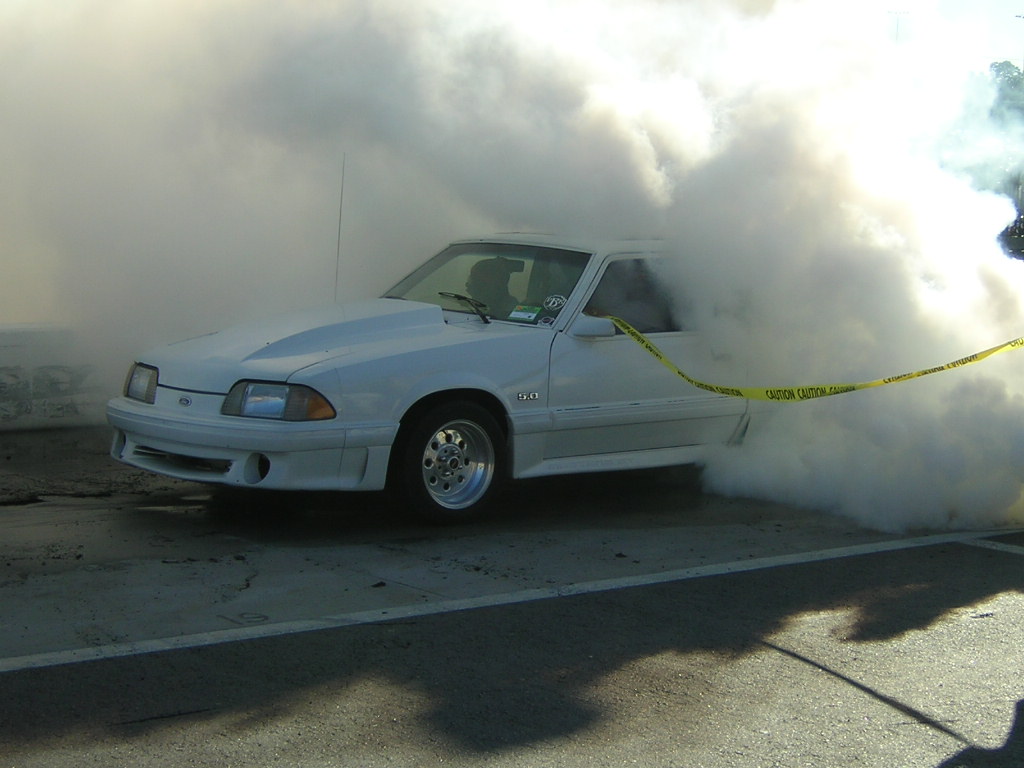 The only place I've seen this definition is in Wiktionary where it is the last and fifth definition given, after definitions 2 and 3, which would seem to suggest these meanings are more frequently encountered:

The Wikipedia article says that a "burnout" can also be called a "peelout" or "power brake", but from what I've seen "burnout" seems to be much commoner than either of those two alternatives. "Peelout" or "peel-out" and "power brake", if found in dictionaries at all, often have inconsistent meanings among each other. One I saw gave the definition of "peelout" as what I would call a skid (as in coming to a stop with the wheels stationary). Wiktionary doesn't list this "peelout" as a "burnout", other dictionaries list "peel out" as a phrasal verb meaning to depart quickly and noisily in a car or motorcycle, and "power brake" gives results like this:

A motor vehicle brake assisted by a power mechanism operated by the engine that amplifies pressure applied to the brake pedal.
American Heritage Dictionary

What I find surprising is that to my knowledge "burnout" isn't really slang or informal. The Wiktionary entry listed definition 2, a marijuana addict, as US slang, but didn't mark spinning tires meaning at all. If I were giving testimony in a court I would most likely use this word instead of saying "He spun his wheels and blew up smoke from his tires."

Is "burnout" not the overwhelmingly commonest word for this action? Is it slang or informal? And if it isn't, why isn't this meaning defined in dictionaries? Even informal and slang terms are defined in official dictionaries, and I thought "burnout" was a very common term. It's something I thought all of us see and hear all the time. And I'd bet some of us do little mini versions of this when we take off too fast, especially in front-wheel drive cars.

The expression burnout meaning spinning tires is actually mentioned in the following dictionaries of slang. It is derived from car racing, originally from US.

The Green’s Dictionary of Slang cites burnout in the suggested meaning apparently as a UK usage:

While The New Partridge Dictionary of Slang and Unconventional English defines burnout as a US expression:

3 - In drag racing, the pre-race spinning of ar’s rear tyres to clean and heat the tyres producing crowd-pleasing noise and smoke (US 1988):

The OED does not list 'burnout' but it does list one of the meanings of 'doughnut' as :

It does indeed seem strange that the OED lists what they refer to as the 'slang' doughnut usage but does not include the slang use of 'burnout'.

The OED also refers to 'burn up' in a slang usage :

8
Why isn’t “hermeticity” easily found in the dictionaries?
4
Is the usage of “night and day” as “completely different” very common?
3
What is the meaning of "peel" in this passage?
50
Use of 'pussy' as term of endearment
0
Missing definition of “night and day”
21
Is there an explanation for why both "pop" and "pops" are used to mean father (singular)?
1
treacly vs. syrupy in figurative use
11
Trying to understand the nuances between ox, steer and bullock
4
What is the origin and meaning of 'lookit'?
2
Can diplomat mean a person with a diploma?