In a live-streamed speech, the Vermont senator made it clear he is no longer actively challenging Clinton and that the goal is to ‘defeat Trump badly’
…
“The major political task that we face in the next five months is to make certain that Donald Trump is defeated and defeated badly,” Sanders told supporters in a live stream video. “And I personally intend to begin my role in that process in a very short period of time.”

Would defeat Trump thoroughly be less ambiguous-sounding? If someone performs something ‘badly’, it usually means they are not very successful, i.e. The action is not done well.

Oxford Dictionaries first definition under the entry of badly is:

will mean an ankle that is severely (thoroughly) injured.

I know what Sen. Bernie Sanders meant, that Trump has to be thoroughly defeated by a wide margin, but did he say it ‘badly’?

I was struck by the Senator's choice of words, and I am hoping for a clear explanation which would also hint at the semantic evolution of badly over the years.

Allow me to present the following Ngram chart displaying the British English corpus from 1750 to 2000, the following expressions totally defeated (blue line) and badly defeated (red line) are compared. Google Ngram tells me that there are no instances recorded for defeated badly.

I narrowed down the search between 1800 and 1850 and Google presented the following graph. 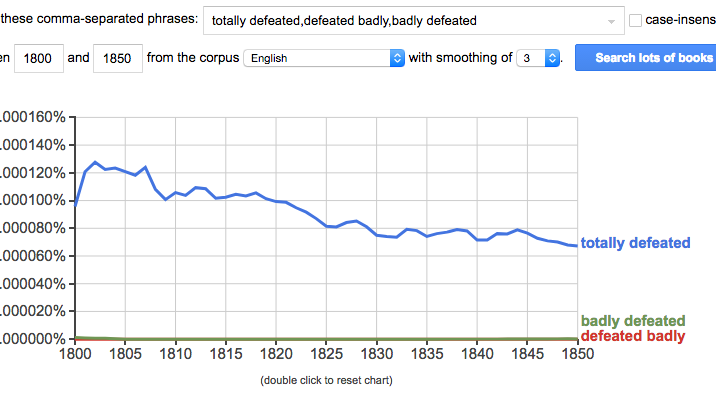 The expressions defeated badly and badly defeated are flatlined, compared to "totally defeated" which at the beginning of the 19th century peaked just below 130%.

I am surprised at the results, and I would appreciate hearing an English language explanation that might shed some light on this.

There appears to be no evidence to support StoneyB's statement in the comments that "badly" in conjunction with defeat has been around for two hundred years, I haven't found any supporting evidence. 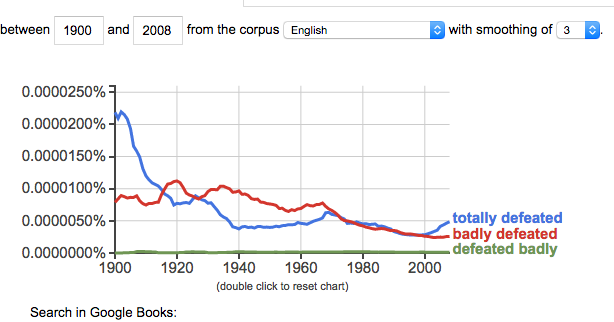 P.S. I am not criticizing Senator Bernie Sanders, an American Senator whom I greatly admire. He is an eloquent and coherent man who speaks from the heart. I only want to hear from others what they think about the usage of badly in that specific context. And whether there are better alternatives.

Badly here is correctly used to emphasize how serious a situation is. For example, badly damaged.

It's a variant of a structurally ambiguous, but common idiomatic expression, that in practice only has one natural interpretation. If you wanted to use the phrase "defeated badly" to mean someone did a poor job at creating the defeat, you would need to add verbiage to counter the default interpretation.

The much more common form of the idiom is the alliterative "badly beaten", which sounds a bit more natural (and less ambiguous) because of its comparative familiarity.

Interestingly, if he had instead said "we want to defeat Trump badly," the new ambiguity is that "badly" seems to intensify "want," not "defeat."

Yes, when a word is negative, it is somewhat ambiguous whether an intensifier should be itself negative. The actual meaning is usually clear from context.

It is another reason you should not rely heavily on modifiers, especially adverbs. There is no shortage of muscular synonyms for "defeat badly": spank, thrash, crush, vanquish, obliterate, and, ironically, trump.