Ask Question
Asked 7 years, 11 months ago
Active 7 months ago
Viewed 17k times
7
This question already has answers here:
Why is there no consistency in the plural forms of words ending on an “f” (e.g. safe, roof, dwarf, etc.)? (4 answers)
Why is “f” in a singular replaced with “v” in its plural? [duplicate] (1 answer)
Closed 7 months ago.

Many nouns that end in ‑f are made plural by changing the ‑f to ‑v‑ and adding ‑es. 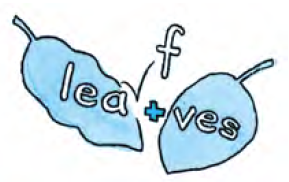 But some nouns that end in ‑f are made plural simply by adding ‑s.

Some nouns that end in ‑f can be made plural in two ways, either by adding ‑s or ‑ves:

Now my question is how to determine whether to use only ‑s or to change the ‑f to ‑v‑ and add ‑es?

There isn't a rule to determine whether to pluralise -f singular nouns as -fs or -ves. It is a matter of custom. A good dictionary should indicate which forms are acceptable (one or both can be).

Apropos to this, Tolkien pluralised some -f singular nouns in unconventional ways. He pluralised "elf" as "elves", where "elfs" had been common, and pluralised "hoof" as "hoofs", where "hooves" is common. It was his style preference, though choosing the less common form may throw the reader.

There are only a few words which you should pluralize by changing the f or fe to v and adding es. They are as follows:

Also, Oaf to oaves appears to be an archaic form, with oafs being correct now. Ditto roof to rooves, with roofs being the current accepted plural form.

So, keep this list. You could probably even memorize them. By my count, that's only 21 words, and a few of those are generally uncommon.

You must also remember that if a compound word ends with one of the words that uses the ves ending to pluralize, the compound word will do the same. For example, knife changes to knives, so penknife will change to penknives, and wolf changes to wolves, so werewolf will change to werewolves. There is a list at en.wictionary.com which includes quite a few of these kinds of compounds.

To pluralize the other words ending in f or fe, simply add s.

Not the answer you're looking for? Browse other questions tagged grammatical-number phonology middle-english inflectional-morphology irregular-plurals or ask your own question.