What is the origin of the term “blockbuster”?

I was looking through some stuff on Amazon, and I came across the Lego Star Wars: The Force Awakens video game, and the description of the game explained that it is based on the hit "blockbuster" movie. I've seen this term used all the time for movies and media that do well, but I've never thought about its significance before. I'm confused as to why.

Blockbuster is typically defined as the following (from Merriam Webster):

2: one that is notably expensive, effective, successful, large, or extravagant

3: one who engages in blockbusting

But these have nothing to do with successful media sources. How did the term "blockbuster" come to be associated with a hit film?

The original sense of bombs that blast the entire block, the term was used figuratively in the fifties referring to very successful movies, from which the contemporary meaning.

The linguistic origins of the blockbuster are fittingly militaristic, since so many such movies are themselves concerned with gun battles, explosions, and other things that go boom. The first blockbusters were bombs, specifically bombs that were able to bust an entire block.

In 1942 the word began being used in newspapers; an article from the Bellingham Herald on July 27th has the headline “Those ‘Big, Beautiful’ Bombs Are Called ‘Block Busters’ By Germans.” The earliest blockbusters appear to have been the invention of the British Royal Air Force, and are described at the times as weighing two tons, being about six feet in length, and possessing of “very great destructive power.”

Blockbuster began to broaden its meaning almost immediately, and within a year it had already taken on metaphorical shades. An article in the Showmen’s Trade Review on July 3rd of 1943 used the word to refer to something other than an actual bomb in a headline, “Blockbuster Hail Stones Cost Theatreman $150 for New Roof..............

Once the Second World War ended, and the literal bombs were no longer being dropped, blockbuster continued to be used metaphorically, generally to describe something that was of great excitement or significance. The term was often used in describing movies, especially by marketers, but not necessarily more so than in describing other things that had a certain wow-factor.

An article from August of 1954 in Film Bulletin, a periodical devoted to the motion picture industry, sheds some possible light on how the word came to be so associated with movies. It concerns a report on the plans that the executives of United Artists had for releasing upcoming features, and says

The earliest reference I can find to "blockbuster" in reference to films specifically is in a newspaper advertisement from 1957, but given the perfunctory use in the advertisement, I suspect there are earlier cases I haven't found. 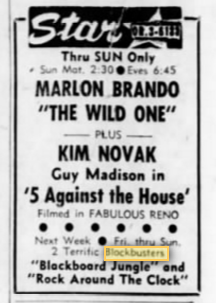 As Josh mentioned, the term previously referred to large destructive bombs in World War II. Like etymonline, OED attests it to 1943:

As early as in 1950, the term had an entertainment context, as "The Blockbuster" was a nickname for the wrestler Hans Schnabel. 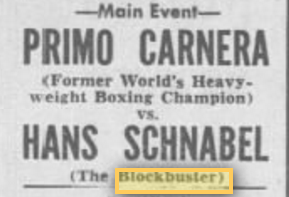 Interestingly, in 1944 there was a film comedy called Block Busters, likely a comic appropriation of the term derived from the military origin. From Wikipedia:

After an afternoon of playing baseball, Muggs McGinnis (Leo Gorcey) and the East Side Kids gang arrive at the door of their clubhouse, where a man named Higgins (silent comedian Harry Langdon, in one of his last film appearances) is removing their "East Side Club" sign. Higgins explains that the owner of the place plans to rent it to some "respectable" tenants. When Muggs learns that the new tenants are due to examine the place at noon the following day, he plans to frighten them away by picking a fight with Butch (Billy Benedict) and the Five Pointers, a rival gang.

I was told by a scholar almost 50 years ago that the origin of the word Block Busting usage in North America was when after 2nd World War a large Number of small houses were built , mostly White Colonies & the real Estate Prices were kept artificially high so that the minority & Blacks who were Poor could not afford it . Ingenious of a few Jewish Real Estate Agents , brought a few houses in these White Colonies & to bring the prices down of these artificially inflated prices , rented them to Black Families . The hate was so strong that the Whites started leaving the Blocks & Blocks of the White Colonies & the law of Economics of demand & supply prevailed & the real Estate Prices came down , the "Block was Busted" . It was a tactic used by ingenious Real Estate Agents to bring the Artificially Inflated Prices of the Houses down. It made logical sense to me then as it does now , however now it's distorted .

Not the answer you're looking for? Browse other questions tagged etymology american-english or ask your own question.

6
Is there a word that means the opposite of “gentrification”?