Origin and evolution of the term "populist"

According to Etymonline populist was originally a late 19th c. AmE term, but its current connotation appeared only a few decades later:

The following Italian site says that the English term is actually a translation of the late 19th century Russian expression "narodničestvo" used to refer a local political movement whose aim was to help rural communities:

1891: The earliest attestation of 'populist' (noun and adjective) in OED is from The New York Times and is misdated 12 Jan 1891 (as observed by DavePhD — see comments). The attestation, which actually appears in The New York Times of the same day and month in 1893, is given for noun sense A.1:

An adherent of a political party formed in the United States in 1891 to represent the interests of the entire population. Now historical.

The same misdated attestation is abridged for the adjective, OED sense B:

The first use of 'populist' that I could find in OED sense A.1 appears 28 May 1891 (paywalled) in The American Nonconformist and Kansas Industrial Liberator (Winfield, Kansas; p 1, col 5). The article refers to the "Cincinnati Conference", an organizing convention held 19-21 May 1891:

"WE ARE WITH YOU."
…
(Copyrighted by the Reform Press Bureau.)
…
HE IS A "POPULIST."
There must be some short and easy way of designating a member of the third party [sc. decided at the Cincinnati Conference]. To say, "he is a member of the People's party" would take too much time. Henceforth a follower and affilliator of the People's party is a "Populist"; for a new party needs and deserves a new term.

This article, bylined "H.W. Ayer, Manager Reform Press Bureau" (op. cit., p 8 col 4), is likely to be the first print appearance of 'populist' in OED sense A.1; the text implies that Ayer originated that use of the term.

1895: The derivation of OED sense A.2, a "member of a Russian political party representing the peasantry and advocating agricultural collectivism", is said to be "after Russian narodnik". This sense is first attested by an author with a Russian surname, P. Milyoukov, in Athenæum of 6 Jul 1895:

The first [group] values primitive collectivism because it regards it as an inalienable trait in the character of the Russian people... [It] sticks to its old name of ‘Populists’.

1849, 1961: However, much earlier attestation of 'populist', from the 31 Oct 1849 issue of The Londonderry Journal, renders moot the question of whether the primary historical sense is "after" Russian narodnik:

On popular habits and character, too, I thought it [sc. "the famine"] had left an altering impress. The peasantry had one and all an altered and careworn look, as if taking thought for to-morrow had at last found and clung to them. In the villages there was small appearance of the fun and frolic so long characteristic of Irish populists.

The racist and revisionist perspective expressed in this article should not be left unremarked. The "altered and careworn look" mentioned was no doubt caused by the extraordinarily severe circumstances imposed upon the Irish people by British misrule, not by any failure of the former to take "thought for tomorrow". Ireland was a net exporter of food during the so-called 'famine', which would be more aptly called a 'starvation' because it was a genocidal act of warlike repression upon one category of people by another.

While the use in the 1849 Londonderry Journal could, perhaps, be "after" Russian narodnik, I found no evidence supporting that origin. The early use also contradicts that the OED sense A.1, attested from US use denoting a specific political party, is chronologically the first use of 'populist'.

A careful examination of the context of the Londonderry Journal use, as shown in the clipping and surrounding material, suggests, rather, that the first sense of 'populist' in English was similar in many ways to OED sense A.4 (first attested from 1961):

A person who seeks to represent or appeal to the interests of ordinary people.

A person who represents and participates in the interests of ordinary people.

The sense intended may, however, be nothing more nor less than "one who populates" (Ireland, in this case).

Saving, however, the Social Democrats and the Popularists, with a brace or so of aspiring Danes, the House could not be brought to see present reason in the motion.

Other senses of 'popularist' than that found in the earliest attestation provided by OED (1882) range in meaning from the jocular superlative "most popular" to the agent noun "one who makes popular".

Professor Tyndall insists on the necessity of imagination for the true scientist. Without it he cannot become more than a calculating mechanism. With it he can soar into realms from which ordinary mortals are excluded. To the popularist of science this same gift of a vivid imagination is not less important…

Most significant, though, in tracing the origins and development of 'Populist' in OED sense A.1, are multiple uses of 'Popularist' in both the US and British press to denote political parties. These uses are attested from 1859 to 1889, that is, from the years leading up to the adoption of 'Populist' in the specific sense given as OED's A.1, by the US press and, soon after, its adoption by the British press.

The word "Americanist" would suit many of them; but the mass of the Liberals would still, we hope, have too much British feeling to accept the name, although we do not forget that the blue and buff uniform of the Whigs was originally a fashion at the other side of the Atantic, and was sometimes worn beneath the Red Cap of the French Republic. The word "Popularist" would be eagerly accepted by the Liberals, but we could not allow it them, for many Conservatives are "Popularists"; besides, in the warfare of party our antagonists would be sure to cry us down as "un" or "anti" popularists. The phrase "Greatest Numberist" is, we admit, as barbarous as if Bentham minted it in one of his "ante-jentacular or post-prandial vibrations," justly satirized by Tom Moore; but there is a large class of floating "Liberals" whose creed might be embodied in the words, vox populi vox Dei. If the "greatest number" were for the Pope, they would be Papists; and if the amjority were anti-Christian, they would vote against Revelation. Let these men dub themselves; to us they are nondescripts.

The German Parliament is the most singularly constituted legislative body in Europe. At the present moment it is subdivided into no fewer than seventeen distinct political sections, without counting the "Savages," who pride themselves upon the speciality that they disagree with all the other denominations, and that every man's hand is against them. These seventeen "parties" rejoice in the following designations: Conservatives, Free Conservatives, German Conservatives, German Imperialists, National Liberals, Liberals, Secessionists, Progressists, Popularists, Poles, Clericals, Social Democrats, Christian Socialists, Particularists, Protesters, Autonomists, and Danes.

At the final division on the measure the Opposition was formed by the Liberalists — all but two — the Social-Democrats, the Poles, and a Popularist.

Historical trends redefining 'populist': By 1896, the Populist Party was split between 'fusionists', who advocated merging with mainline Democrats, and who ultimately prevailed, and independents. However, for decades afterward (1900-1960), the predominant reference of the term was to the former US political party.

A sprinkling of uses of 'populist' ('populistic', etc.) in the more general sense of "representing ordinary people" does appear in the material I examined from approximately 1900-1960. The historical trends prompting the return of the general sense appear to have their origins primarily, if not exclusively, in the US, and particularly in the gradual absorption of the Populist Party into the Democratic Party mainline along with the successful marginalization of populism as a variety of socialism.

HE IS A POPULIST

Shall we call the members of the People's party Peoplars, or Populists, or Dennis, or what?

To an unprejudiced observer "Dennis" appears to be about right.

But, rather than "Dennis" the term "Populist" stuck.

Up through 1965, Webster's Collegiate Dictionary (7th edition) maintained that the noun "Populist" should be capitalized and referred only to the above party, the only definition being:

a member of a U.S. political party formed in 1891 primarily to represent agrarian interests and to advocate the free coinage of silver and government control of monopolies

By 1977 Webster's Collegiate Dictionary (8th edition) no longer capitalized the word and added a second definition (the 1965 definition being the definition 1):

A great number of "populist" (using the term generically) movements arose beginning in the late 1800s and running through at least the 1930s. (Some of them are arguably still active today.) I'm no historian, but I believe that social historians do ascribe several causes:

The net of this is that large numbers of people were both "disaffected" by conditions and "empowered" by their ability to write and communicate with others in the same situation. "Populist" movements, by whatever name, were simply coalitions of people who found themselves in this situation.

Given how pervasive the causative factors were, it's not surprising that the various movements arose about the same time, and relatively independently. From the standpoint of where the concept first arose, my understanding (totally unqualified as an historian!) is that the first ripples in the wave were likely in England and Germany, and that Russians joined the parade rather late. (But I must admit ignorance of what was going on in the rest of Europe.)

As to the term "populist", it's an obvious formation from what would naturally have been referred to in English as a "popular movement" or as a movement by the "populace", and likely does not have any etymological roots in an expression from another language.

In 1788, a in New Travels in the United States of America, Jean Pierre Brissot wrote that John Hancock had "the virtues and the address of popularism." It went on to describe Hancock as "more beloved by the people" than by "enlightened men."

Samuel Adams is the best supporter of the party of Governor Hancock... A great generosity, united to a vast ambition, forms is character: he has the virtues and the address of popularism; that is to say, that without effort he shews himself the equal and friend of all...

Mr. Hancock has not the learning of his rival, Mr. Bowdoin... The latter is more esteemed by enlightened men; the former more beloved by the people.

OED attests this use of "popularism" as the earliest variant of "populism." 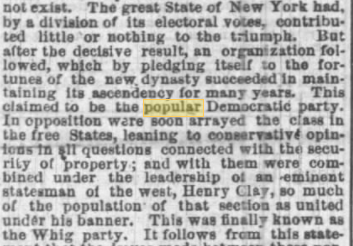 The first cited use of "populist" that I could find was, as mentioned by the OP, from 1891.

JEL has already done a thorough job documenting the precursor uses of "popularist."

Around that time, variants of "populism" seem to have been in the process of being sorted out. The term "populistic" appears around the same time as "populist." 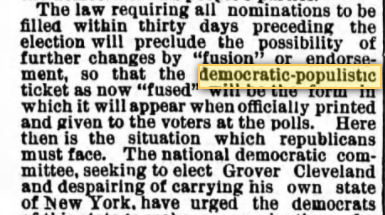