What is the term used to describe the space under a roof that joins two buildings?

Sometimes architects will take two tall (say 8-10 storey) buildings that happen to be near each other, and build a glass roof between them.
Down on ground, the area which originally would have been a street, or alleyway or something, now becomes a quasi-outdoor, courtyard type space where people can hang out and look up a roof/ceiling many storeys in the air.
What is the name for a space like this?
I think there are many terms which are used to describe this architectural feature. I just know there is one term in particular that - to me - describes it really well. So for example if you said to a friend

the friend would know where you meant.
I keep thinking "atrium" or something like that?

If you google images of covered courtyard, you get many images like this: 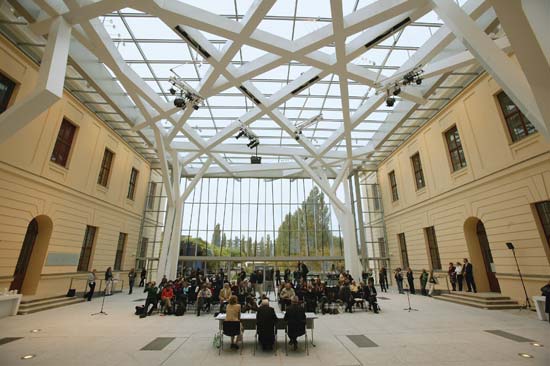 Many of these images show an area between two large buildings, with a latticed glass roof. Maybe this is enough to convince you that covered courtyard works as a description.

More specifically, such a glass-covered courtyard is called an atrium, which is probably why this word sprang to your mind. Many of the spaces depicted in the linked images might be called atriums.

Further, if you google "atrium between buildings" you get many results which depict spaces like the ones you describe. This should convince you that atrium is, if not the perfect word, a very good one.

The following photo, for instance, shows an atrium between the IBM Building and Trump Tower: