What does "iages" refer to "gauges" or edges?

We're trying to determine whether "iages" was used to describe "gauges" or "edges".

The usage was found in a document from the early 1630's drafted by an alderman attempting to settle a dispute between joiners and carpenters.

Joiners were given the credit to "All worke whatsoever already invented or that hereafter shall bee invented being made by one or two iages with the use of all manner of nayles.

TL/DR The word is unequivocally 'gage' and not 'edge'.

I will first deal with the historical context of the dispute and show that other scholars explicitly state that 'gauges' were both a new tool at the time of the dispute (1632) and a subject of the dispute itself. Given this fact, we could stop here, but I think it's worthwhile to think about how the unusual spelling could have arisen too.

The following is a definition of 'gage' from Chambers (1728). Notice that it is specifically a tool used in joinery, not carpentry according to this definition.

GAGE, in Joinery, is an Instrument made to strike a Line truly parallel to the streight Side of any Board or Piece of Stuff. Its chief Use is for gaging of Tenants [tenons AM] true, to fit into Mortisses; and for gaging Stuff of an equal Thickness. It is made of an oval piece of Wood, fitted on upon a square Stick, to slide up and down stifly thereon, and with a Tooth in the End of a Staff, to score, or strike a Line upon the Stuff at any Distance, according to the Distance of the Oval from it.

The gauge also appears in contemporaneous descriptions of joiners' tools. Here's an example from Moxon 1703 (from Welsh 2008): 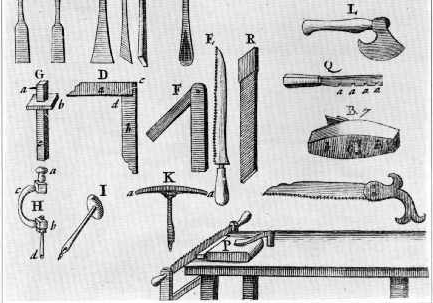 But the carpenter's tools are different: (Figure omitted.)

Now part of the dispute between the different Guilds (in this case the Carpenters and the Joiners) was spurred by the appearance of many specialized tools used by joiners (but not carpenters) for decorative woodworking. (Lou, 1989:11).

The one printed version of the document (from which any other web versions derive) is in Appendix B of An Historical Account of the Worshipful Company of Carpenters of the City of London, by Edward Basil Jupp with a supplement by William Willmer Pocock.

If you read the texts carefully, this meaning becomes clear. The first part of the text in Appendix B is the summary of the Joiners' position, i.e. the list of work that only members of the Joiners' Guild should be allowed to do (according to the Joiners). The two items here are talking about how the work is made, not describing its characteristics. So 'gage' makes more sense than 'edge' in both of these contexts.

There is one other use of 'iage', but it's a verbal use, and harder to determine the exact meaning but it seems again to be talking about manners of construction.

In the list of works that the Carpenters are permitted to do (according to the Joiners) there is one further mention of the use of 'Iage':

In the Carpenters' response to the Joiners, the word appears again:

To the eighteenth there is almost noe carpenters worke to be done but they may and doe use the Iage and nailes both in invented and to be invented which being allowed to the Joyner they will doe any Carpenters worke.

We know that conjunctions typically conjoin elements of the same semantic type, and in this case 'Iage' and 'nails' are conjoined, and serve as the object of the verb 'use'. This is the clearest indication that tools or ways of making things are being described, and therefore 'gage' is the correct word for the context too.

Lou 1989 specifically mentions the gauge in this context:

The gauge which figures for the first time in the London arbitration documents of the 1630s [49] was another such novel piece of equipment which appeared on the market at the time. ibid.

So now we know (conclusively, I think) that the word 'Iage'/'iage' in the transcribed text is 'gage' and not 'edge', since if the gauge were "an issue of dispute", and the word 'gage' (or 'gauge') doesn't appear in it anywhere, then the unusually spelt word must be the instance of 'gauge' being discussed.

How could the unusual spelling have arisen?

The original source document seems to be here, which is unfortunately not digitized.

The printed version of the text in Appendix B of Jupp and Pocock's book is in a book produced in 1887 by the Carpenters Guild itself based on their records. Neither of the authors are historians or philologists; Jupp was the "Clerk of the Company", and Pocock was "a past master".

Now, it's almost certain that the original documents are hand written and not printed, and that the transcription in Appendix B was done by Jupp or Pocock themselves. So this leads to two logical questions.

For neither word do we find attested 'iage' spellings in the listed alternates. However, a couple of the actual quotations for 'gage' show up with the form 'iauge', but both seem to be from French directly, so it's not so clear that this is a viable alternate spelling for the English word at the time. (Thanks to sumelic for raising this point.)

However, when we look at Early Modern English handwriting, there is both plenty of variation in letter forms and forms that look quite different from modern forms. In particular, the handwritten 'g' looks a lot like a modern 'j': 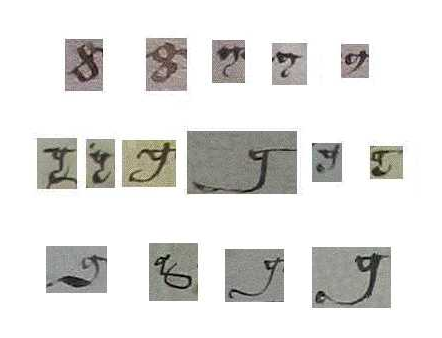 But the letters 'i' and 'j' have a complex history in English spelling. Quoting from the English Handwriting 1500-1700: An Online Course

i/j, I A different case is the letter j. As late as the nineteenth century, some still insisted that it was just a variant form of the letter i, which could represent both a vowel and a consonant. But many in our period tried to use the j form for a consonant and the i for a vowel. Again, your job is to record what you see, which will in most cases be a letter i. In the first half of the period the only common occurrence of the j will be in sequences of roman numerals, where it was used terminally: 'xiij' for xiii. As the period goes on, j-consonant (e.g. justice, rejoyce) becomes increasingly common. Where upper-case (or 'majuscule') letters are concerned, there is only one letter form in manuscripts of this period, a capital I. Though it will often look like a J, it should always be transcribed as 'I'.

So here's a guess as to what happened: in the original handwritten source, the 'g' of 'gage' looks like one of the long J shaped letters in the image above. The transcribers (Jupp and/or Pocock) mistook this for an I, and that's how the transcription error arose. Of course without looking at the original manuscript we can't tell for sure.

Chambers, Ephraim. 1728. Cyclopædia, or, an universal dictionary of arts and sciences : containing the definitions of the terms, and accounts of the things signify’d thereby, in the several arts, both liberal and mechanical, and the several sciences, human and divine : the figures, kinds, properties, productions, preparations, and uses, of things natural and artificial : the rise, progress, and state of things ecclesiastical, civil, military, and commercial : with the several systems, sects, opinions, &c : among philosophers, divines, mathematicians, physicians, antiquaries, criticks, &c : the whole intended as a course of antient and modern learning. J. and J. Knapton. http://digital.library.wisc.edu/1711.dl/HistSciTech.Cyclopaedia01.

Jupp, Edward Basil & William Willmer Pocock. 1887. An historical account of the Worshipful Company of Carpenters of the City of London. Pickering & Chatto. https://books.google.com/books?id=4pY4AAAAMAAJ.

Louw, H. J. 1989. Demarcation disputes between the English Carpenters and Joiners from the Sixteenth to the Eighteenth century. Construction History 5. 3–20.

It is fair to assume that iage is from the French iauge. Cotgrave [French-English Dict. 1611] gives clearly iauge/gage but it also seems that he chiefly understands a "gage" to be a measuring instrument and in particular "the instrument wherewith caske is measured" and not a joiner's marking or mortice gauge.

It is Cotgrave's habit to prepend joiner's tools with "a joyner's" as in "Gouge...a joyner's googe". His additional meanings of iauge might though offer a hint in the quest for a meaning that does not concern the marking gauge: "an yron Leaver; the soyle of ground; whence, Labourer à iauge. To plough deep, or as deep as there is any soyle". It seems possible that the "iage" refered to in the joiners/carpenters dispute of 1632 relates to the joiner's plough or plow especially in relation to item 9 "all Sorts of Wainscott and sealing of Howses and setling made by the use of Two Iages". Two plows, one twin-ironed and one single-ironed, were used from at least the early 15th century to produce the tongue and groove respectively of tongue-and-groove "setling" [settling/jointing together]. Where elsewhere the use of a single iage is alluded to, this could refer to an ancient but still used type of multiple board cladding where each board is continuously feathered or bevelled and has a groove on its unreduced edge only, so obviating the need for a plowed tongue. And it might also refer to lap jointing which also required one plane [rabbet or plow] only and was often used when laying floor boards. The relationship of iauge to the plow might be further supported by the early 17th century term "plough-jogger" or "-jagger" meaning a ploughman.

I do see that none of this dispels the possibility that iage means a marking gauge, not least because the French today sometimes call a mortise gauge a mortaise jauge [although the word order suggests a later borrowing from English, and trusquin, also current, is a much older and the more widely used French term] and the action of a marking gauge is a ploughing action of sorts, but an iage as a specific type of joiner's [or carpenter's] plow/plough does seem to me to sit much more happily in the contexts it is found in here.