What does the word stror mean?

I was reading the book The Invisible Man by H.G. Wells when I came across the word, stror. I can't find it in the dictionary. I want to know what it means. The original sentence is :-

"This stror, sir, if I might make so bold as to remark—"

If anyone wants to look for context, see page 10 of The Invisible Man (PDF) 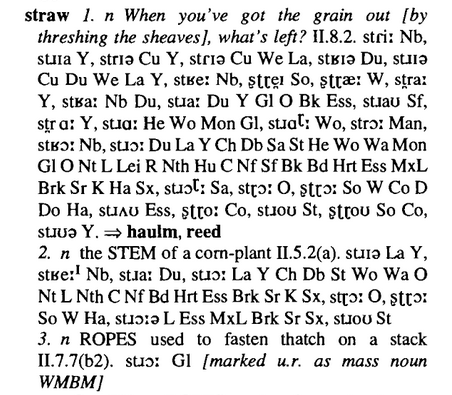 Several of these could be represented by the spelling stror.

To demonstrate that Wells's use in The Invisible Man is not a "typo" (contra comments to the OP), you can consult images of a published book, which are much less likely to contain typos or scanning errors than are found in such formats as pdf, epub, etc. For that, you can go to Internet Archive and find images of the the actual book in published form, such as here and then search for the word in question to see if that is the way it exists, and in this case it is (image below): 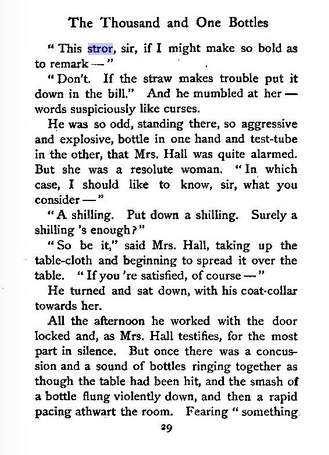 From context, we can guess that stror means straw, as that is the topic in question not only in the next sentence but in several previous sentences.

You can also search for the word stror in Google Books and get a return that includes several instances, including some by the very same H.G. Wells:

I don't like it, O' Man, that's all.” “Can't help it, if the wind blows my stror,” said Mr. Rumbold, still far from clear about it.... “It isn't ordinary civility,” said Mr. Polly. “Got to unpack 'ow it suits me. Can't unpack with the stror blowing into one's eyes (emphasis mine).

It is not 100% clear that stror means straw here, but if you click on the link you find the sentence

Rumbold scratched his ear with the three strawy jampots he held in his hand...

The mention of strawy is enough to convince me that stror here means straw even though, frankly, I'm not sure what jampot means here.

Too, you can from the same Google search find results in which it seems conclusive that stror means straw, as in the one from The Missing Link, Dyson, 2012:

If there ain't any people in he kin lie in er corner on th' stror under his blanket an' sleep, an' sometimes he kin stay lyin' on the stror when there's on'y a few people in, so long ez he growls a bit, an' stretches hisself (emphasis mine).

Here, entire sentences are "spelled with" dialectal spellings. Standard spelling would be

If there aren't any people in he can lie in her(?) corner on the straw under his blanket and sleep, and sometimes he can stay lying on the straw when there's only a few people in, so long as he growls a bit, and stretches himself.

In rustic or rural settings people often had to use "straw beds" in poor circumstances or where the only material available for a matting was straw, as in a barn.

I suppose if the Toffs took a fancy for chewing a stror or a twig, / Like a tout or a hostler.

Somehow in Anglo (US?) culture, there's an oft-repeated scene or habit of people who put a piece of straw in their mouths and "chew" on it. By straw, I don't mean the plastic/glass tube you use to suck a liquid into your mouth, but "a stem of any cereal plant, esp. when dry and separated from the grain" (Oxford English Dictionary)—although the plastic/glass straw developed from the use of natural straw for this purpose.

I 'ad several turns with a snappy young party with stror coloured 'air.

The OED attests to the use of straw to refer to straw-colored hair, most recently from the 1970s. Stror itself is not in the OED online version.

I believe it's a phonetic spelling of 'straw' in dialect (straw is mentioned in an adjacent sentence).

Not the answer you're looking for? Browse other questions tagged meaning orthography dialects or ask your own question.

4
What does "off the top" mean in this context?
5
Meaning of "Toffy Circles"
4
What is "gilhooley"?
3
What does "to the prejudice of discipline" mean?
0
What's the meaning of the "rather as though" in this example?
3
Meaning and etymology of the word "dockle"
0
What does underwriting mean here?
3
What does "skreeble", "glurp", and "grindlebloff" mean?