Nerd vs. Geek vs. Dork [duplicate]

Possible Duplicate:
Which term correctly identifies those who enjoy programming/technology: “geek” or “nerd”?

I'm somewhat perplexed on the usages of these terms. Most references appear an ambiguity as to the definitions of the individual terms and the clear distinctions between them. Some sources would describe all these three terms as being similar while others differ.

For example, google definition states that a nerd is "foolish or contemptible" and is also "boringly studious", while Wikipedia article on nerds made no mention of such characteristics at all, but rather although can be "socially impaired and shy, is overly intellectual". Wikipedia also defines dork as "a slang word for a stupid or inept person; similar to nerd or geek"; however, its articles on the other two terms made no mention to such traits.

So what are the common perceptions of a nerd, geek, and a dork? 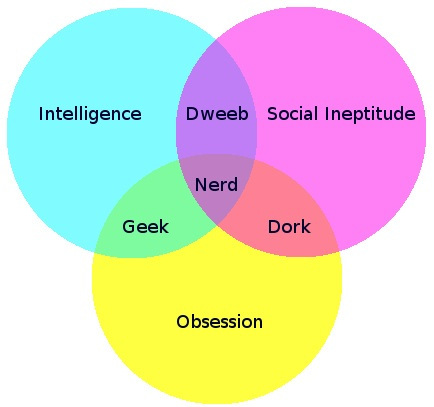 66
Which term correctly identifies those who enjoy programming/technology: "geek" or "nerd"?
3
How did nerd and dork become synonyms?

5
What's the meaning of the word "nerd-crush"?
4
Usage and confusion on "geek" and "hipster"
0
a 'geek', a 'computer addict'?
0
Geek vs Geek Out - beyond computers
9
Usage, meaning and popularity of the term "nerd"