Usage and confusion on “geek” and “hipster”

Within the circle I regularly communicate with the meaning of these words is commonly understood:

In particular in the UK a hipster always refers to a Nathan Barley type. They even have a song.

Does anyone know (and can provide citations) for when this usage of hipster started?

Online these seem much more confused; I regularly see traits from hipsters applied to geeks. For instance someone described as a geek for wearing an ironic t-shirt, while to me that would make them a hipster (a geek would genuinely be a fan of whatever it was). Occasionally I've seen geek traits applied to hipsters, for instance someone describing a hipster as socially awkward (stereotypically UK hipsters are all about being seen at the right parties).

Is this a US/UK difference to what geek and hipster refer to?

Is the meaning of geek changing over time to refer to hipsters?

Is there a US equivalent to hipster?

You have a lot of questions! Your definition of geek is a good one, in terms of current usage:

someone with an obsessive interest in one field

That can be any field, not necessarily technology, computing, physics, mathematics, the sciences. Someone with an all-consuming interest in the fields I described would be a nerd, not a geek.

Now, to answer the part of your question about the meaning of geek changing over time! Yes, absolutely the meaning has changed. I don't remember Alice Cooper but I heard that in his concerts, when he bit off the heads of live chickens, he was referred to as a geek.

According to Scott Rosenberg, biting off chicken heads was standard usage prior to 1995. Here's an excerpt from Rosenberg's Dreaming in Code, p. 130, 2006. Sorry for the image (I couldn't copy and paste from ehe Google books frame, not without doing something bad): 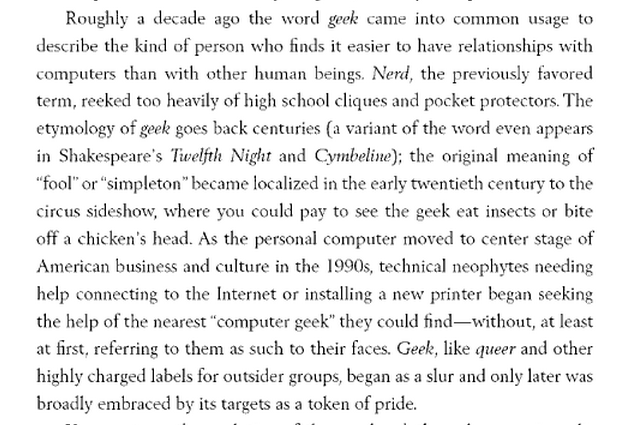 So geek certainly has changed in meaning, in both American and British English. I did some other searches, and all corroborate what Rosenberg says. The circus sideshow meaning for geek was described as such by American writer Robert Penn Warren in a poem, Amazing Grace, in 1977. Farming books of the 1890's in the U.S. define geek similarly.

Q: Does anyone know (and can provide citations) for when this usage of hipster started?

According to the OED, the earliest use of hipster in print is its 1941 definition in Jack Smiley's Hash House Lingo:

And according to Wikipedia:

Hipster, as used in the 1940s, referred to aficionados of jazz, in particular bebop, which became popular in the early 1940s. The hipster adopted the lifestyle of the jazz musician, including some or all of the following: dress, slang, use of cannabis and other drugs, relaxed attitude, sarcastic humor, self-imposed poverty and relaxed sexual codes.

According to a 2009 Time article, the current meaning emerged in the 1990s:

The word would fade for years until it was reborn in the early '90s, used again to describe a generation of middle-class youths interested in an alternative art and music scene. But instead of creating a culture of their own, hipsters proved content to borrow from trends long past. Take your grandmother's sweater and Bob Dylan's Wayfarers, add jean shorts, Converse All-Stars and a can of Pabst and bam — hipster.

In 2003, Robert Lanham's satirical book The Hipster Handbook described hipsters as young people with "mop-top haircuts, swinging retro pocketbooks, talking on cell phones, smoking European cigarettes... strutting in platform shoes with a biography of Che Guevara sticking out of their bags." Lanham further describes hipsters thus: "You graduated from a liberal arts school whose football team hasn't won a game since the Reagan administration" and "you have one Republican friend who you always describe as being your 'one Republican friend.'"

A quick dip into Usenet gives the following quotes.

So far, Bob's popularity has been limited to hipster counterculture circles.

And what a thriving metropolis it is! Why, I can hardly walk across my hall, much less the campus, without running into so much musical and other diversity that it makes me want to puke! I only wish I could be so kool [tm] as all these hipster dudes and dudettes walking around this campus o'mine!
But there's this one dude on campus......he must be like the most totally awesome hipster goth-monster type dude! Why, he even mentions some band called SoM! I don't know what it stands for or what they sound like, but they must be like so totally freakin' awesome cuz he listens to 'em! I think they're industrial though, cuz that's what he said. And I want to be just like him when I grow up from just wearing black to wearing dark black. I heard someone told him that SoM wasn't really industrial! gasp! But he shut their mouth when he deftly replied that they were nanny- nanny-boo-boos and they didn't really know what industrial was and were just closed-minded potty-mouths who didn't listen to real music. Boy, I wish I could be just like him! sigh

Yes, I can see how it [Totoro] looks boring at first sight. IMHO, the marketing of the recent US release botched this, presenting it as a G-rated kiddie movie that turns out to be too sweet for the taste of most real American kiddies, instead of going after the ironic hipster crowd or adults nostalgic for childhood.

If it has "lost its hip appeal" to you,
then I suggest you are a "hipster" who is not in search of a plain old good time, but is looking for this year's new fad. In that case, I think you SHOULD leave rave behind, to those of us who still care about it, and go find something "trendy" and "cutting-edge" to do...

There's been a mistaken conflation of geek and hipster here, when they are really quite different. It's easy to understand why this has occurred: computer geeks tend to be very adamant about staying up to date with the most recent technological advances. This can be seen as a form of hipsterism. This doesn't, however, make geeks hipsters or hipsters geeks. It means that geeks have a trait that is commonly ascribed to hipsters: that of dropping the old like a rock for whatever seems like the new hotness.

Not the answer you're looking for? Browse other questions tagged etymology american-english slang or ask your own question.

2
Usage of “you is”
1
Phrase to means “something a hipster would like”
0
Geek vs Geek Out - beyond computers
8
History and usage of the term “furore”
2
Etymology and usage of “enfetter”
9
“turnt” and “turnt up”
0
“Is there still any confusion?” Or “Is there any confusion still?”
0
Confusion on using this/that and that/those