The etymology of "snooze"

I was looking up the etymology of the word snooze, and the Etymology Online suggested it was unknown.

I thought this was odd, because the verb to fall asleep in Czech is usnout, which is very similar. I was wondering if there is a connection via Proto Indo-European, like the connection between the PIE médʰu (honey wine) and the English mead (Honey Wine), the Czech med (honey) or the Iranian mei (wine). Anyone know the PIE reconstruction for sleep or related words?

Is there any connection between snooze and usnout?

etymology origin-unknown
Share
Improve this question
edited May 16, 2019 at 20:50

Snooze is of uncertain origin according to the Oxford English Dictionary, "snooze, v.":

apparently a cant or slang word of obscure origin.

The earliest usages establish a general meaning but aren't particularly illuminating for knowing where it comes from.

The 1753 edition of The discoveries of John Poulter, alias Baxter by J. Poulter include a brief cant lexicon that includes the following:

The Cull is at Snoos ; the Man is at Sleep

In The festival of Momus, a collection of comic songs, including the modern and a variety of originals (1780), this bit appears (p. 69): 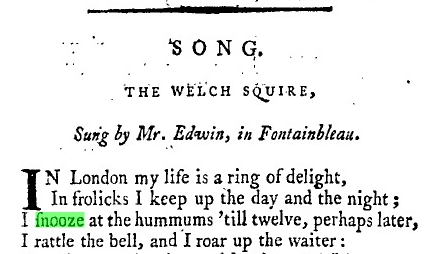 I snooze at the hummums (a Turkish bathhouse) 'till twelve...

All higley pigley, pigs in the straw, / We snooze without thinking of harm, 'Till a signal that goes, / We jump into our cloaths, / And as fine a confusion as ever you saw / Is the midnight false alarm.

By 1795, Humphry Tristram Potter includes snooze in his A new dictionary of all the cant and flash languages, both ancient and modern. While Potter's lexicography involves a lot of plagiarism and unreliability (as Julie Coleman claims in A History of Cant and Slang Dictionaries Volume II), given the evidence above, snooze appears to have persisted in cant and in other lower registers like popular lyric:

It may be related to other sn- nose words (snout, snore) or sleep-related words (doze, drouse, snug), but that's guesswork.

I came here due to my studies of the Polish language. I noted that the Polish noun for "sleep" is "sen", which changes to "snu" in certain grammatical cases. (As you may know, Polish nouns can have multiple different forms.) I usually try to think of mnemonics to help me remember Polish words and I noted with interest that "snu" sounds very much like "snooze". There's little doubt in my mind that the "s-n" construction for "sleep" is an ancient Proto-Indo-European root.

The Green’s Dictionary of Slang suggests an earlier usage, but adds no details about its origin:

In the following interesting extract from Grammarphobia, they notice that a number of English terms related to “nose” are ultimately related to old German “snut”, but still snooze appears to have a misterious origin:

The words “snot,” “snotty,” “snout,” “snoot,” “snooty” (in the sense of looking down one’s nose) and “schnoz” are all related to a similar prehistoric Germanic root associated with the nose, “snut.”

“Snob” is unrelated, and “snooze” is of uncertain origin. But “snitch,” meaning an informer, may be related to a 17th-century word for a fillip on the nose. So there may be a connection there.

What this suggests is that 'snooze' most likely came from a variety of words meaning 'sleep' in other languages, making it entirely possible that 'usnout' is a distant relative of 'snooze'.