: a long bar of iron with sliding shackles used to confine the feet of prisoners especially on shipboard.

Merriam Webster provides a vague history and etymology for "bilbo" -

History and Etymology for bilbo

Etymonline only suggests the etymology for noun (2) -

bilbo (n.)
kind of sword esteemed for temper and elasticity, 1590s, from Bilbao (in English Bilboa), town in northern Spain where swords were made. The town name is Roman Bellum Vadum "beautiful ford" (over the Nervion River).

and Lexico states that it comes from -

for its first meaning.

Therefore, I would like to know more about the history and etymology of the word "bilbo", and how its first meaning came into use.

The origin appears to be just from the a kind of swords made in Bilbao (Spain). The term appears in writing in Shakespeare’s works. As ankle shackles the usage is from early 18th century: 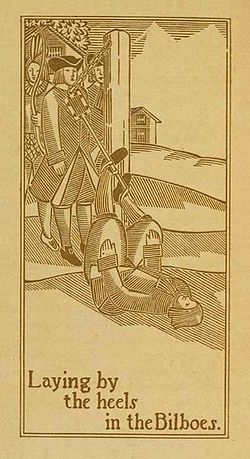