Is “kip” Chinese in origin?

While looking up the history of kip, I realized that the information about its origins is rather scant. The noun and verb to kip in BrEng is often said when a person wishes to take a short sleep or a quick nap. It's a colloquial expression and sounds very post-war Britain to my ears. Surprisingly, Etymonline completely ignores the word, listing only kipper. Wiktionary on the other hand comes to the rescue:

But thanks to a comment left by Janus Bahs Jacquet it seems the connection between kippe and kip is quite strained.

... but kippe (as a noun) is beyond vanishingly rare in Danish. It’s a marginally common verb, meaning ‘tilt’ or ‘lop’ (or ‘dip’ as in ‘dipping the flag’), but according to the dictionary, the noun and the verb are unrelated. The noun is allegedly the same as kipe ‘basket for carrying grain’. Supposedly, the shift from ‘basket’ to ‘hovel’ was helped along by Middle Low German kiffe ‘hut’, whence it was used in compounds to refer specifically to a real dive or a brothel, which is when English presumably borrowed (?) it. Quite a shaky etymology overall, I’d say

So on my trek to find the truth, I came across the Chinese-English Dictionary of the vernacular or spoken language of Amoy by Carstairs Douglas, printed in 1873, London. The language Amoy or otherwise known as Xiamenese, Xiamen or Hokkien dialect, I believe gives some insight as to how kip was loaned to the British English language to mean a short sleep or nap. It says

Kip [R. hasty; urgent; in extremity].
tioh-kip, in very great haste; not willing to wait a moment, as in some very urgent matter.
kip-kip, very swift, like the demon of thunder [...] said also figuratively of anything to be done in great haste.
kip-sio, a small thin flat-bottomed earthen kettle for warming things quickly.

Could it be that Dutch sailors adopted this expression? I am blissfully unaware of Danish maritime history but I seem to remember reading somewhere that the Dutch traded with the Chinese, was it the 13th century or later? This in turn reminds me of the Italian explorer Marco Polo and his tales in China in The Travels of Marco Polo or, in Italian Il Milione ("The Million"). But in Italian the letter K is a foreign letter and I can think of no Italian words beginning with ch = /k/ which are remotely related to the meaning of haste, urgency or velocity.

Could the BE slang term ‘kip’ meaning to sleep be a borrowing from Hokkien? I searched Hobson/Jobson and came up with this:

CHOP-CHOP . Pigeon-English (or -Chinese) for 'Make haste! look sharp!' This is supposed to be from the Cantonese, pron. kăp-kăp, of what is in the Mandarin dialect kip-kip. In the Northern dialects kwai-kwai, 'quick-quick' is more usual (Bishop Moule). [Mr. Skeat compares the Malay chepat-chepat, 'quick-quick.']

The characters here, as Janus suggested, are most likely 急急. Hobson-Jobson is clearly mistaken in referring to ‘kip-kip’ as Mandarin rather than Hokkien. This entry might be read as saying that ‘chop-chop’ and ‘kip-kip’ were competing forms donated by different Chinese dialects/languages. However, it’s not clear if the latter was ever used in English or not.

In any case, if English had already borrowed a version of this Chinese word to mean ‘quick’ with no semantic shift, why would it re-borrow the same word from a different dialect to mean ‘sleep’? It seems highly unlikely. Generally, to establish a relationship of borrowing we would want to have three things: (A) a phonetic link, (B) a semantic link and (C) a context (a time and place where the donor and recipient languages would have been in contact.)

With ‘kip’ we have A, it seems, but even that could be challenged. Initial ‘k’ represents an aspirated stop in both English and pinyin, but in other Chinese dialects it might well be pronounced without aspiration and thus sound more like an English ‘g’. And how did Cantonese ‘gap’ become English ‘chop’? Sound change in borrowed words can be idiosyncratic.

Concerning B, any semantic link between ‘quick’ and ‘sleep’ would be forced. Did Chinese people in a 19th century treaty port who wanted to take a nap after lunch ever say ‘kip-kip’ to signify ‘just a short one’ to English people, who then misinterpreted the word to mean sleep? It seems too tenuous to take seriously.

Finally C, the context. Where would the hypothetical encounter in B have taken place, and at what point in time? The history of Chinese-Western contact is of course very complex. We might be talking about the south China coast in the 19th century. The main treaty ports frequented by English traders, at least before the country was ‘opened up’ after the 1840 Opium War, were Canton and Hong Kong. Since these are located in a Cantonese-speaking area, it’s probably safe to take Cantonese as the default donor language for loans into British English. However, other points of contact like Singapore would have had a different mix of dialect groups – generally for Southeast Asia the Hokkien communities were larger and more numerous than Cantonese ones, so the contact language might have been Hokkien. And so on.

The formal title of Hobson/Jobson is ‘Glossary of Anglo-Indian Words and Phrases…’, but it actually covers ‘Oriental terms’ more broadly, not just South Asian ones. More about this dictionary here:

I could not find evidence that the term kip has Chinese origins. The Danish word kippe appears to be the only documented origin so far.

According to World Wide Words: the term probably comes from the Danish term kippe that means hut, also used to refer to a mean alehouse. First used as an Irish slang term meaning brothel it was later used to refer to a place where one sleeps and then as noun and verb that refer to taking a nap:

Early meaning and usages of the term Kip:

Kip: early usages both as a verb and as a noun that refer to nap/sleep:

Some extra info on the Dutch connection that might be useful:

The page from het Vlaams woordenboek doesn't provide any etymology for kip in the sense of bed, so it might as well have arrived into Bruges dialect through British influence.

In A Dictionary of Slang, Jargon & Cant Embracing English, American, and Anglo-Indian Slang, Pidgin English, Gypsies' Jargon and Other Irregular Phraseology, Volume 1 (Albert Barrère, Charles Godfrey Leland, G. Bell, 1897), another story of the origin of 'kip' is presented as probable. Barrère, Leland and Bell (hereafter BLB) got at least one thing at least partially wrong, but what they got wrong can be corrected with modern sources (the etymology of 'kipe' as shown in the OED Online). 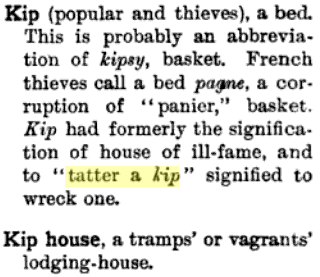 By this account, 'kip', meaning 'a bed', comes from 'kipsy', meaning 'a basket'. BLB remark, without making any necessary connection, that French thieves use a corruption of the French word meaning 'basket' to refer to 'a bed'.

BLB then define and explore the putative origins of 'kipsy': 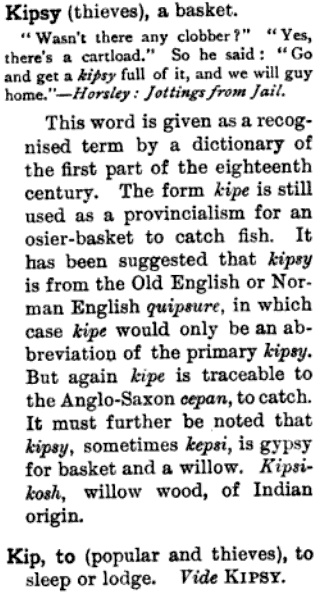 Here BLB suggest 'kipsy', meaning 'a basket', might derive from Old English or Norman English quipsure. In that case, 'kipe', meaning 'a basket' is an abbreviation of 'kipsy'. However, and as it happens more in line with BLB's second thoughts on the derivation of 'kipe', OED Online provides a thorough etymology of 'kipe' in the sense of 'a basket', along with quotations attesting to that sense and going back to around 1000:

This origin of 'kip', as elucidated by BLB and corroborated in part by the OED Online etymological history of 'kipe', doesn't involve the Hok-keen dialect senses of 'kip', nor does it involve a putative Dutch etymon.

The account does explain the development of the contemporary verbal and nominal 'sleep, nap' senses of 'kip' from 'kip' in the senses of 'a bed' and 'to sleep, lodge' in thieves' and popular slang of the 1800s. 'Kip' is supposed ("probably") to be a shortening of 'kipsy' in the sense of 'a basket', and the parallel development of French thieves slang for 'a bed' from "a corruption" of the French word for 'a basket' is noted. Correlated with the form 'kipe', then, 'kipsy' and its abbreviation 'kip' is shown by the OED Online etymology to be derived from Old English cýpe, also meaning 'a basket', attested from c1000.

The OED thinks the 'sleep/bed' sense comes from 'house of ill-fame', for which there is a 1766 citation (from the Vicar of Wakefield, of all places). There certainly was trade contact with China at that stage, both British and Dutch; but not among the urban masses who later used the word to mean 'sleep'. In addition, I don't really see how any of the Amoy meanings could transfer to `sleep'; I would think this is just another of the coincidences that English etymology is full of.

Not the answer you're looking for? Browse other questions tagged etymology british-english loanwords origin-unknown or ask your own question.

7
Why does “going to kip” mean “going to sleep”?
19
Why doesn't English have a separate word for “head hair”? (head hair vs. body hair)
2
origin of “gingerly”
14
What is the origin of “rat”?
7
Origin of “curse”
3
Origin of “surf”
8
Why is the English word of Chinese origin “Shih Tzu” used to refer to a dog breed not known in Chinese as “Shih Tzu”?
9
The etymology of “snooze”