While watching the following video by Buzzfeed, entitled $1 Sushi Vs. $133 Sushi • Japan, one of the guests invited on the culinary road trip, a Japanese woman, used the expression “work wife”.

Stephen: Where we're goin' next Andrew?
Andrew: So next we're on our way to a place called Shun Sushi, is that right? [Rie: “I'm here”] And it comes recommended by one of our colleagues named Hitomi, actually.
Rie: Yep, my work wife
Andrew: Your work wife?
Rie: Yeah so this restaurant is neighbourhood sushi joint. Somewhere you wanna go once in a while when you're craving sushi.

In my naivete, and never having heard this expression before in my life, I thought Rie had a romantic partner with whom she worked. Instead, a little sleuthing revealed that a work wife or a work husband (note the absence of the present participle suffix -ing) is someone who works with you in close proximity. In other words, more than a co-worker or a normal colleague but not somebody you're actually married to. A BBC article defines it as “…‘work spouse’, a significant, but platonic, other whom you pair up with at the office.” and they throw in a few statistics for good measure

Career website Vault.com found that every year since 2010 about 30% of the people they surveyed said they had a ‘work spouse’, with the exception of 2013 when that share jumped to 44%.
Having a ‘work spouse’ makes you happier, 7 November 2016

According to the following article the idea of using terminology typical of marriage relationship dates back to the ‘30s. But the terms work wife/husband are relatively recent and date to the late ‘80s.

Although the term “office wife” has been around since the 1930s, the modern definition, the one that places the “work spouses” in an equal partnership, has only been around for 30 years. “Work marriage,” “work wife” and “work husband” first appeared in a 1987 Atlantic article by David Owen in which he describes the close but platonic relationships that can exist between coworkers, even asserting that the relationship is in some ways better than an actual marriage.

In the article McBride (professor of communication studies at Creighton University) notes that the expression has changed over time and now refers to the dynamics of marriage on a more equal basis:

Owen’s article referenced a degree of subservience on the part of the woman in the relationship, but McBride said changes to these relationships over the years have mirrored changes in actual marriage dynamics.

“I think the term is relatively new because the workforce has changed in the last 20 to 30 years,” McBride said. “If we think back to the ‘Mad Men’ days, there was, all the time, speculation about the boss and his secretary and what was going on. The difference now is that the relationships are more on equal footing, and I think that reflects the way we think about marriage now, too.”

The term also expresses the closeness of a relationship that can’t fully be described by the lexicon that already exists.

Work spouse" is a phrase, mostly in American English. A work spouse may not just be a co-worker, but can also be someone in a similar field who the individual works closely with from a partnering company. A "work spouse" is also referred to as "workplace spouse", "work wife", or "office husband", "work husband", or "wusband".

To expand on my comment and address some usage aspects from a UK perspective at least (I suggest reading user240918's answer first):

The history of the phrase has more than a hint of sexism and out-dated power-structures in it, even if more recent use appears to have evolved. Any use must be carefully informed, and there's plenty of room for misunderstanding when a metaphor based on a sexual relationship is used to refer to a platonic one.

It's clear that the origins of the concept (even if the phrase used may have been "office wife") come from the days when men had executive roles, and women secretarial roles, that were often expected to include caregiving even if the possibility of anything more intimate was denied. Even as things have moved on, interdependence is a defining feature of the work wife/husband/spouse concept, implying a balance that's absent if one person see a friendship in that light and the other doesn't.

For a detailed discussion of the concept, Work Wives, Laura A. Rosenbury, University of Florida is worth reading. The article goes into the history of gender in the workplace, and evolving roles in marriage, and has plenty of references covering the evolving use, even if you don't get beyond the introduction. A sample quote may give a flavour:

Depending on the portrayal, a work wife is a secretary in a subordinate role, a flirtatious equal, a trusted confidante, a source of other forms of emotional support in the workplace, or multiple combinations thereof. Such portrayals also exist alongside portrayals of work spouses and work husbands that are similarly diverse.

Work Wife is tongue-in-cheek. It implies a wife who cooks dinner and performs other thankless domestic chores, not a romantic partner. It was used in the 1980s when platonic male-female workplace friendships were still enough of a novelty to comment on. The joke is there is too much familiarity, especially in mundane non-work issues like ordering lunch, running personal errands, doing small favors, etc.

There isn't really a "work husband" although that phrase would be understood as a re-gendering of "work wife". It was meant to sound sexist, invoking traditional (imbalanced) gender roles. A work husband might interview a repairman or handle rental car arrangements, while a work wife prepares food. The roles within the work friendship are gendered.

It is strictly platonic, since it openly jokes about a (taboo) workplace affair. The origin, probably around the 1930s implies an office affair, but by the mid-century it was a jibe about a secretary who is being taken advantage of by her boss. It is not sexual, instead it implies she is performing inappropriate (personal) errands outside the scope of the job which his wife should be doing. In the 1980s, workplace gender roles were being re-examined, so the comment was also a dig at any woman who presents too femininely at work.

The woman in the video Rie has updated the joke "reclaiming" an out-dated sexist term for her co-worker Hitomi to praise her domestic skills. Hence, Hitomi (the cooking-expert) has recommended the sushi restaurant. The photo that is flashed shows Hitomi holding a plate of food and there is a casserole dish of something she presumably cooked and brought to work. 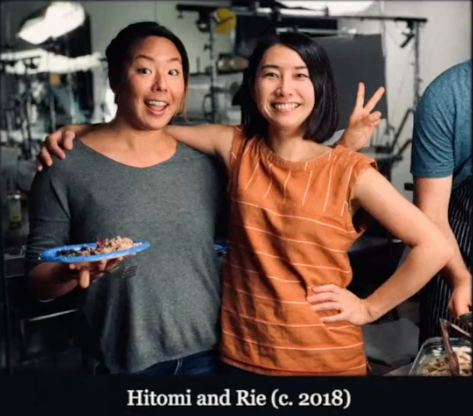 This usage is very esoteric, probably only other city-dwelling office-working young feminists would understand the reference. The humor is in the inappropriateness of the term. Calling Hitomi her "work wife" appears to be an in-joke between the two women, playing against workplace professionalism, traditional gender roles, and blasé same-sex marriage.

The unmentioned butt of the joke is Rie herself as the non-contributing "husband" in the friendship.

The young men in the video don't seem to understand her joke either.

Not the answer you're looking for? Browse other questions tagged american-english british-english colloquialisms phrase-origin or ask your own question.

0
Base on home work
0
What is a “plumber's wife”?
4
Origin of the saying “happy wife, happy life”
1
Did the phrase “ball and chain” referring to one's wife originate in U.S. black culture?
1
She is his would be/ wife to be