I can well understand "in spite of "and "because of "separately,but the combination really spins my head .Please help!Thanks a lot! Pattern likes "A not in spite of B,but because of B(or C)". 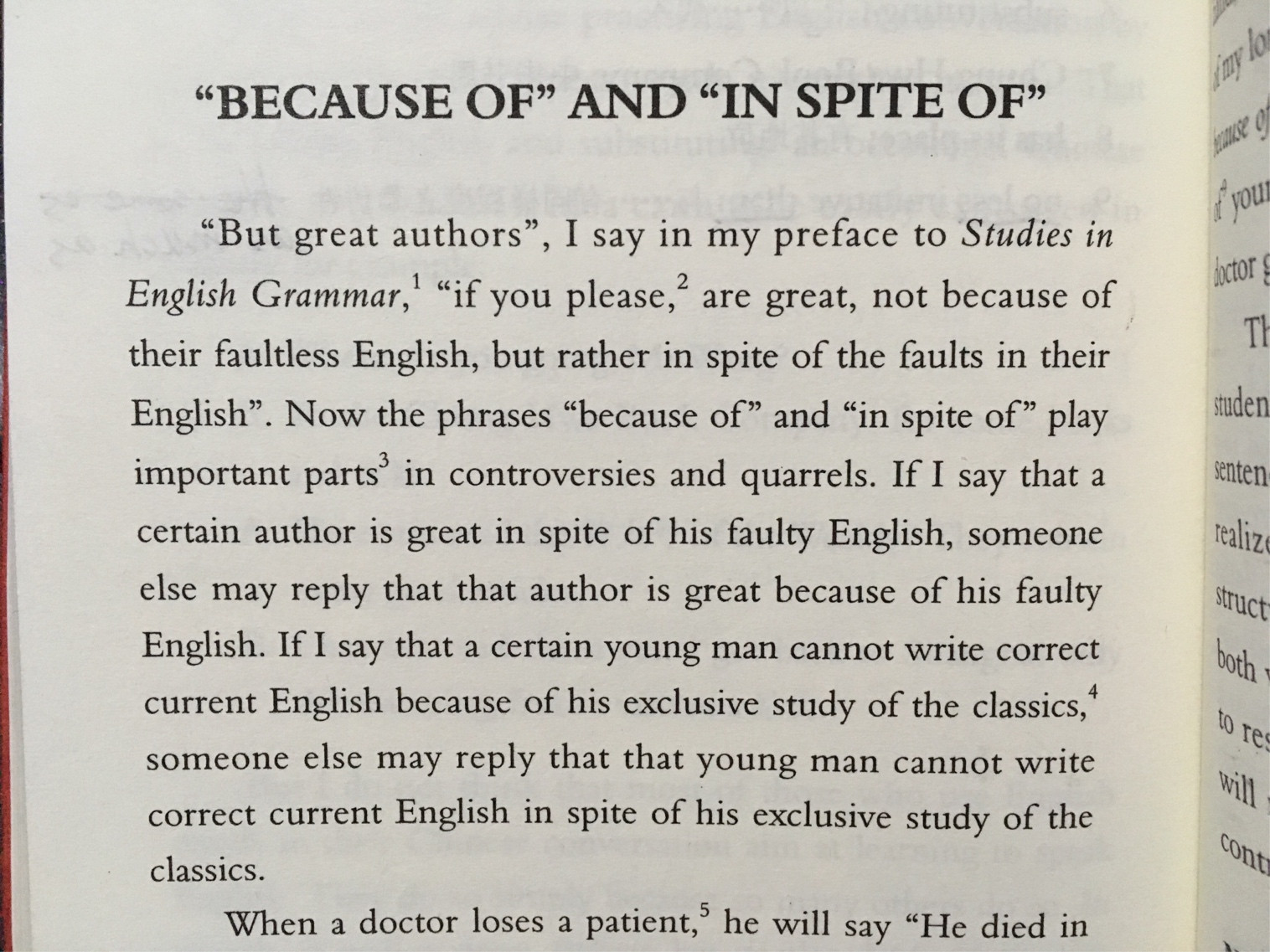 The author is trying to draw attention to an intuitive paradox. Naively, one might assume that great writers would use proper English, and this would be one of the aspects of their writing that makes them great. But he asserts that it's actually the faults in their English that make them great writers (perhaps because they use techniques to overcome their language deficiencies that produce better finaly results). Because this seems to be an unlikely relationship, he uses in spite of to describe the relationship. And he prefaces it with not because of to make it clear that he's contrasting it with the expected relationship.

It could be rewritten in less flowery language as:

'Not in spite of but because of' (similar to what the book is starting to say at the bottom):

When a doctor loses a patient, he might say "He died in spite of our treatment, not because of it"

What this means is that some people might expect an invasive treatment to be the cause of a death (for example, chemotherapy causing immune system issues), but the doctor is saying that that wasn't the case.

'Not because of but in spite of':

I washed the dishes not because my wife told me to wash them, but in spite of her telling me to.

"In spite of" means 'Event A happened, so we expected Event B not to happen. But Event B happened anyway.' For example:

In spite of my bad Spanish, I was still able to shop in Mexico.

"Because of" means 'Event A happened, which caused Event B to happen' For example:

Because of my bad Spanish, I couldn't tell my doctor what was wrong.

An example of using them together:

Because of my height, I couldn't reach the top shelf to get the box. In spite of this, I was still able to get it once my brother helped me.

Not the answer you're looking for? Browse other questions tagged meaning word-usage phrases expressions or ask your own question.

3
What does “it doesn’t make much of a case for itself” mean?
1
Publishing an inquiry
4
Sterling took another big leg down
1
I am not able to understand the meaning of following sentence. Please help me understand if it is a statement of question.
1
How can I say to lightly understand something? Does faintly understand work?
1
Are there any differences between “understand someone” and “understand about (someone)”?
0
Are “not because” and “not just because” opposites?