The gender-neutral honorific “Mx” has its own entry in the OED since August 2015, so no one can argue it doesn't exist. According to The Sunday Times, central and local governments have been quietly using this [mysterious] honorific in their documents and forms for at least two years. British government departments, including the NHS (National Health Service); online bank accounts; credit cards; driving licenses; and universities all accept this title.

Jonathan Dent, assistant editor on the OED, said it was the first addition to the accepted stable of honorifics in recent history and demonstrated how the English language is evolving to accommodate an ever–changing society.

“This is an example of how the English language adapts to people's needs, with people using language in ways that suit them rather than letting language dictate identity to them”

A title used before a person’s surname or full name by those who wish to avoid specifying their gender or by those who prefer not to identify themselves as male or female:

Their second example refers to the American ‘transperson’ singer-songwriter and cabaret artist, Justin Vivian Bond. A person who is said to have used the title Mx since 2011

Wikipedia claims Mx (/ˈmɪks/ or /ˈmʌks/) ‘is commonly accepted’ and has existed since 1977. The Daily Mail confirms the latter, and says the title first appeared in the US publication ‘Single Parent Magazine’ in 1977. Which makes it an American neologism.

An example from a British Adult Deed Poll Application Form 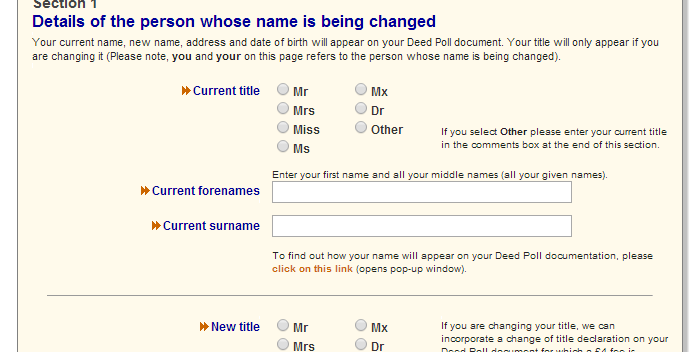 Is this honorific used only in the UK? What about Australia, Canada and the US? I found no mention of Mx being adopted in British passports, but if a British citizen visiting one of these countries were to feel ill, or be arrested would that person be allowed to call themselves Mx, instead of Mr or Ms?

Living in Italy I haven't come across anything remotely similar, and none of my friends or family living in the UK have ever mentioned this new gender-neutral title to me, so I was wondering how common is this abbreviation? Is it an abbreviation? Mx is not short for anything, whereas Mr. is short for mister, and Mrs is a contraction of Mistress.

In the UK it is almost universally an option to use either 'Mx' or no honorific. Most people will miss this, (no pun intended) because they wouldn't ask about it, however, only once in the last 2 years have I met with a situation where I had to put down a gendered honorific. This is possibly because most organisations that ask for your honorific tend to be of a more formal nature, and so are well thought out.

Places that use 'Mx' have included banks, train & flight companies, loyalty cards, utility companies and components of the NHS.

Not all organisations deal with this issue using 'Mx' though. As I mentioned earlier, some organisations are happy to simply omit honorifics, both my Internet provider and my place of work deal with it this way. As I am only drawing from personal experience, I don't know which is the more common approach.

As best I know, the only significant place where you still are compelled to identify your gender is your passport. Although the document uses the label sex, it probably means gender as a CGR is what's required to change it. A UK passport does not record an honorific, so it does not really count in this question.

As for when I first saw it, I can't honestly remember. The oldest document I can find it on at the moment is my rail card, which is only from 2013. The last time I remember its absence, however, is Facebook, who did not update their options until 2014.

I pronounce it mix as the few times I have heard someone else say it (when signing up for something over the phone) that is how it's been pronounced. It's an unusual thing to actually need to say.

I've personally never heard Mx or seen it used, anyway according to M-W it is not clear if and when it will catch on in the U.S.

From The New York Times:

A bit of history. Engineered semantic units in language virtually always fail. I'm not sure any have really stuck.

"Ms." caught on because as women entered the workforce in management in high numbers, secretaries (managers and information workers back then didn't do their own typing) got tired of having to call up the secretary of every woman they needed to address a correspondence to and ask if honorific should be "Miss" or "Mrs." A silent accord among secretaries caused "Ms." to be the standard. Don't see the same practical drive behind "Mx." which I've never heard of.

At present, most people know the gender of the person they address and increasingly, people have begun using informal first names. Also, I've noted I end up addressing a collective of a company or teams and so use just a generic "Greetings" which replaces the old "To whom it may concern."

I have noticed that a lot of people under 30 have informally begun to use the Japanese "San" and "Chan" suffixes, which they absorbed from the world wide explosion of anime in the last twenty years. "San" is purely gender neutral and "Chan" usually is. It's possible these may become standards at least in English, which easily adds loan words.

It's much like the way the word "OK" spread from the US to every language in the world owing to US military getting scattered all over the planet in WWII and the Cold War combined with the dominance of Hollywood 1930s-1970s.

Most non-Japanese are unaware of the several levels of group status and dominance are encoded in the language, so I doubt that will cause any problems.

If not the "san" suffix, I would put my money on something equally unplanned and unexpected. Languages are organic structures that evolve through selection pressures, they can't be engineered from the top down.

Not the answer you're looking for? Browse other questions tagged gender-neutral transatlantic-differences honorifics or ask your own question.

3
what does the phrase "a real word" mean?