The term "first world problems" refers to a petty thing complained about by someone living in the upper or middle class.

Is there are word or phrase that means problems or complaints about things that you have relatively little to worry about compared with others (especially in front of those others).

For example, a straight A student complaining about getting a B on a difficult math test that almost everyone failed.

single-word-requests phrase-requests
Share
Improve this question
asked May 3, 2015 at 23:31

There's the term world's smallest violin, which is used to express mock sympathy.

In conversation, it's often accompanied by a hand gesture, as if someone is playing a miniature violin. For example, to that "A" student complaining about his B on the math test, I could say something like:

Aw, that's a shame. Here's the world's smallest violin, playing I Feel Sorry for You.

The website TV Tropes says this about the gesture:

A predominantly Western gesture, the World's Smallest Violin is given to a person who is exaggerating the sorrow of his/her predicament in order to gain sympathy; the person who does the giving presumably has none.

Wikipedia mentions it under a list of hand gestures; the page there reads:

World's Smallest Violin (also called "How Sad" or "World's Smallest Violin Playing Hearts and Flowers") is made by rubbing the thumb and forefinger together, to imitate bowing a violin. This gesture is used to express sarcasm and lack of sympathy, in response to someone exaggerating a sad story or unfair treatment.

Another (more brief) way to express such mock sympathy would be:

I put the quotation marks in that sarcastic remark, because if I said “Woe is me!” in that vein to the B student, I would be putting those words into the student's mouth.

As a noun, you can consider trifle.

A trifle is something that's totally unimportant. If your friend is freaking out over which shoes to buy and you call her dilemma a trifle, you're saying she shouldn't get so worked up over nothing. [vocabulary.com]

Fuss is a verb also, same as to make a fuss; make much ado about trifles/nothing.

to complain especially about something relatively unimportant. [dictionary.reference.com]

1.3 A feeble or petulant complaint:

The worst part of car shopping ... I have to call the sellers. Ugh.

A coffee mug that is too big for any of your cup holders is a total nightmare...

If you suspect it is a way of boasting without seeming to overtly, that is referred to as a humblebrag.

When Straight-A Joe niggled about getting a B on the that test everyone else failed, we felt like strangling him.

Settling for half-and-half in her coffee niggled Sally, and her incessant bitching about it niggled us.

The oversize coffee mug is your niggle; I have bigger things on my mind.

Annoying, troubling, or irritating in a petty way:
a pointless dispute over niggling details.

He would have pulled a straight 4.0, except for that niggling B in Phys-Ed.

What's wrong with first world problem? That is a generic term. It can be used in precisely the context you describe. The Oxford Dictionary defines the phrase as:

A relatively trivial or minor problem or frustration (implying a contrast with serious problems such as those that may be experienced in the developing world):

The term is used to minimize complaints about trivial issues by shaming the complainer, or as good-humored self-deprecation.

Basically, the phrase can be used to describe any problem that, objectively, can be considered trivial. It does not need to involve upper or middle class, it just describes a problem that wouldn't really be an issue if the person in question had any real problems such as needing to find food or shelter.

Example uses (taken from here) include:

Where to Go On Vacation

Have Cereal But No Milk 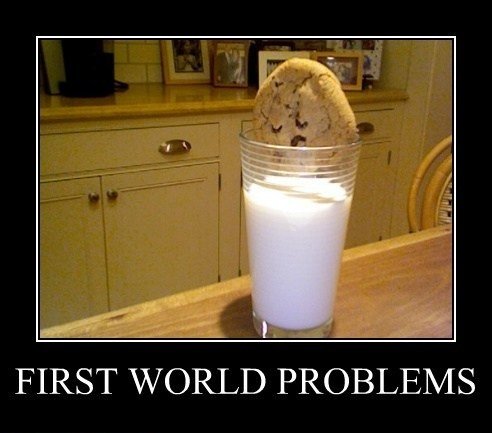 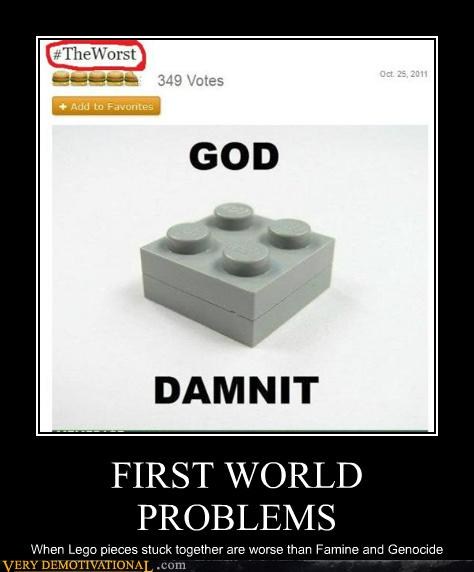 So, in short, just use first world problems, it is precisely what you're looking for.

I live in the north of the UK, and I've heard the word "nesh" used quite a bit to describe someone who complains about a situation that's not necessarily worth complaining about.

14
Is there a word to describe one who brags by complaining?
1
A problem that isn't really a problem

3
The solution to all problems
2
Phrase for targeting surface level problems?
7
What do you call a generic person?
6
non-condecending term that has the meaning that is usually associated to 'first world'
0
A more generic term for "installed base"
0
A word for "good state of the world"
0
Generic Question Sheet
0
What will be a good expression/idiom/noun form for "external problems"?