The verb let means “allow”, “permit”, “not prevent or forbid”, “pass, go or come” and it's used with an object and the bare infinitive.

The full form let us can be used similarly

None of the above can be contracted; however, when let us is used for making a suggestion; giving self-encouragement; expressing a consequence or plea, it is often contracted to let's

It appears that the contracted form of ‘let us’, let's has acquired idiomatic meaning and usage through the years.

Let's go and let us go, may convey different meanings. Let us go in the sense of allow us to go, may not be replaced with let's.

According to the following source:

The brainchild of a Frenchman called Geoffroy Tory, the apostrophe was born in 1529 and adopted by British typographers in 1559. Originally, its use was to show a missing vowel letter, and it was used mainly to show spoken English, as in a play script. In the case of ‘let's’, the apostrophe substituted the letter -u. Thus an English word such as loved, could be written as lov'd, the article the could be represented as th', and agree could be spelled 'gree. This also explains why ‘it is’ and ‘it was’ were often contracted to ‘tis and ‘twas.

Initially, the apostrophe was intended to demonstrate the elision of a vowel, meaning the vowel sound had been omitted, assimilated, or slurred in pronunciation, as in th’ inevitable end, but the apostrophe was also used to indicate a missing letter when the vowel no longer existed in the spoken form, as in can’t (Parkes, 1993, p.55).

Parkes, M.B. Pause and Effect: An Introduction to the History of Punctuation in the West

Early examples of the apostrophized ‘let's’

The Proverbs, Epigrams, and Miscellanies of John Heywood (1562)
(edition printed 1906)

Thy tales, (quoth he), show long hair, and short wit, wife:
But long be thy legs, and short be thy life.
Pray for yourself! I am not sick, (quoth she).
Well let's see, what they last tale cometh to, (quoth he):
Thou sayest I spend all; to this, thy words wander;
But, as deep drinketh the goose as the gander.
Thou canst cough in the aumbry, if need be, [. . .]

Come frolick it a while my lustie swayne,
Let's see if time haue yet reui'd in thee,
Or if there be reayning but a grayne,
Of the olde stocke of famous poesie,
Or but one slip yet left of this same sacred tree.

Have with You to Saffron-Walden Or, Gabriell Harveys Hunt is Up
By Thomas Nashe, ‎John Payne Collier (1596) [p.43 let’s have]

But come, let's go unto Alfonso's house,
And see how Valeria and Kate agrees;
I doubt his music scarce will please his scholar.
But stay, here comes Alfonso.

Laura: The Toys of a Traveller or The Feast of Fancy (1597)
By Robert Tofte

Th’ immortal PARCÆ, fatal Sisters three,
Of mortal men, do sing the shunless fate:
What once Was, what Is now, and what Shall Be;
Their life, their death, their fortune, and their state.
Our Song let be like theirs! for Three they were;
And so our number is. Three are we here.
Sing Laura then! Sing Love! and sing will I!
Of dreary fortune mine, sing let us all!
Let's sing in doleful tune most mournfully.
How 'Tis, how Twas, and hapless still Shall fall ;
The Present, Past, and (which none can mend) What Shall Be, world to come, withouten end.

By the same author. Three examples of let's in one sonnet. 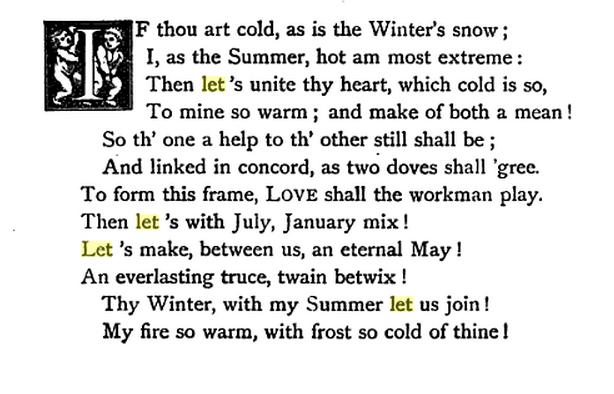 Skialetheia. or, A Shadowe of Truth, in certaine Epigrams and Satyres (1598)
This edition printed in 1843

Oh what a slauerie's this? Shall a free mind
Sicke of a Cockneys ague, feare the wind?
No, let's be Stoicks, resolute, and spare not
To tell the proudest criticke that we care not
For his wooden censure, nor to mittigate
The sharp tart veruice of his snap-haunce hate

Law-trickes OR, Who Would Have Thought It.
Written by John Day (1608)

Can. Impute the gross mistake to the fault of the Author:—You shall likewise see the amorous Conceits and Love songs betwixt Captain Pod of Pycorner and Mrs. Rump of Ram-alley, never described before.

Swash. Good master, let's see Mrs. Rumps of Ramm-alley.
Y. Str. How? Captain Pod and Mrs. Rump? I think this snuffling slave flouts us: then y'faith let's see the sawing of the Devil with a wooden saw.

let us away vs. let’s away

The following is an excerpt from a wiktionary discussion [emphasis mine]

I don’t see away as a verb at all. It’s an adverb. Let's away is not an unusual or antiquated use of away, but of let’s. In Modern English, let's requires a verb, as in let's go (away). [. . .] it just means “let's go”, “let's leave”, “let's depart”. [. . .] let's is very similar to the modal verbs can, could, may, might, must, shall, should, will, would, ought, need and dare, in that in Modern English it needs to govern an infinitive verb (let's do it, let's eat), but in earlier times the infinitive could be elided and implied, as in “let's away”.

Let us see vs. let’s see

Let's see is an idiomatic expression, used when the speaker is thinking or trying to remember something, let us see was first recorded in 1520.

This Ngram chart is probably indicative as to when and why “let us” is contracted to let's. The formal-sounding expression “let us consider” is more likely to be found in academic papers, texts or studies than in poetry or novels; according to Google Ngram, its equivalent let us think has been overtaken by the contracted let's think in recent years.

First-person inclusive let-imperatives (let us/let's) are commonly considered as proposals for joint action by speaker and addressee, but there are some cases which diverge from the cohortative usage. Thus, let's can also be speaker-oriented and function e.g. as a
(self-)exhortative announcement. Or it can be addressee-oriented, carrying a “second person quasi-imperative meaning”
(Biber et al. 1999:1117; cf. De Clerck 2004:218f)

The earliest usage, I found out, could be credited to Shakespeare.

Innovatory colloquial variants, irregular in form, have been brought into the language in America (and thence elsewhere) in the 20c:

In Dutch and German, a similar construct with "laten we" / "lassen wir" (literally "let we") is possible. See for example http://taaladvies.net/taal/advies/vraag/483/laat_ons_laten_we/. This makes it plausible that the origins of using "let" for suggestions go back to before the West Germanic languages split.

The interesting thing here is that it is probably first a degeneration of an answer rather than the imperative statement. It could be a mark of that oh-so-typical human impatience that contracted this short phrase.

"Shall we come up with an example?"
Let us!

The origination of the contraction is dated around the time of Elizabethan England (1567, according to M-W). It is certainly likely that, even if Shakespeare did use it in his plays (Henry VI P2, "let's kill all the lawyers"), it was well in use colloquially first.

Another point to make is that English lacks a simple conjugation of the first-person plural imperative, while both Germanic and Romantic languages have consistent presentations. The contraction may have been a partial result of this lack, in that there is clearly a need for a simple way for language to express this type of imperative.

In Glaswegian dialect "give us" is often contracted in this way. The verb itself is changed to "gie" (interestingly, it becomes regular: past simple and past participle "gied") and "give us" is commonly abbreviated to "gies" (pronounced "gheez" and in exactly the same way as the third person singular)

Not the answer you're looking for? Browse other questions tagged etymology apostrophe contractions imperatives or ask your own question.