Should I put an apostrophe in "for all its worth"? The meaning comes to about the same thing either way, as far as I can make out, and it seems like "it's" is more popular. But is there an accepted version? Or any reason for preferring one over the other, other than staying conventional?

Apparently, the writer's intention was always to mean "it is," not "its." (A hasty conclusion and a sweeping statement, yes.)

Comparing "for all it's worth" and "for all its worth" with "for all it is worth," and considering that apostrophe use for the genitive was in fact an after thought. 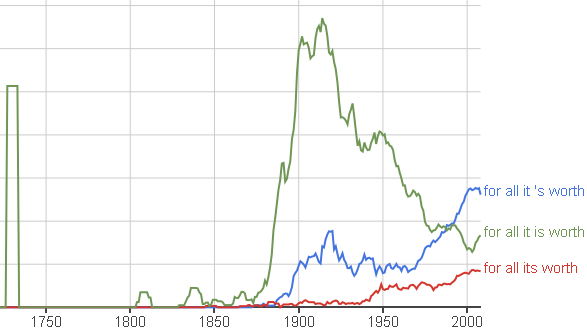 The arrival of the apostrophe as possessive indicator confused both the writer and the reader, so that today more often than not, authors do not know which is the "original idiom" and the reader is not sure what the author had meant to say.

The safest approach for writers would be to avoid the apostrophe altogether in this case and be specific, and for the reader to rely on context where needed and possible.

"For all it's worth" wins in my opinion as it is more adaptable to other sentences also.

"For what it's worth" for example doesn't make sense if changed to "For what its worth". That might make one wonder "For what, its worth?"

It ultimately depends on what "it" is. Does it own the worth? Or is it simply worth the worth?

Depending on whether there is an apostrophe, the phrase has two quite different meanings, and that is what needs to be explored further.

When you 'use something for all its worth', the thing may well be, and probably is, worth a lot. For example if I am a politician and someone important says something nice about me, I might decide to refer to the matter as much as I possibly can and hence 'milk it for all its worth'.

I think it depends on the context. If you're referring to specific attributes of the object and its value, then you use "its". Usually these values are not defined by units like money, and are subjective. However, if you're referring to the object's overall value - for example, its value on the market - then you use "it's". However, I really do not think there is a solid rule for apostrophe use in this case, and I suppose that it is arbitrary for most.

This is mostly a matter of distinguishing between having worth ("all its worth") and being worth something ("all it's worth"). I can only find subjective arguments for the value of either case over the other.

As others have noted....it depends.

When you use the sentence, if you can insert the word "that" ("for all that it is worth") and have it still make sense in the way that you are using it, then you need an apostrophe to contract "it is" to "it's". If the word "that" makes no sense in the way you're using your sentence, then you need to leave out the apostrophe so that you are using the possessive "its".

As above, it depends, but WS2 brings up a good point that is probably easier to understand by replacing 'it' with 'he', namely, making the debate: "for all he's worth" vs. "for all his worth".

Thus, depending on the sense of worth/tone you wish to convey, you may wish to use "it's" for something of more concrete value, and "its" for something more abstract. Considering that "it" typically refers to objects that can be valued in monetary terms, and is frequently used in the context of "milking something for all it's/its worth" I would usually default to "it's" when in doubt.

Not the answer you're looking for? Browse other questions tagged differences expressions punctuation or ask your own question.

29
Sentence in which "its" and "it's" can be interchanged without changing the meaning?
30
Why is there a distinction between "its" and "it's"?
1
What's the evolution of the phrase "milk it for all its worth"?

5
Does 'symbolic' mean the same as 'symbolical', and should one be preferred?
0
Comma or semicolon when omitting a conjunction
0
"Where should I put the question mark (?)(,)" asked RoDaSm(?)
25
"It's all downhill from here"—meaning and etymology
1
What's the the proper usage of apostrophes for possession when two might be used? See example
0
apostrophe, compound noun, compound modifier
1
Do I add quotes around my thoughts?