Water can/may still get in

The Cambridge Grammar of the English Language , page 184, reads

May is virtually excluded instead of can in water can still get in, partly by the likelihood of it being interpreted epistemically rather than dynamically.

However, I cannot grasp any different effective meaning between both versions.

This appears to be a case of inadvertant misattribution by the Original Poster. Here is the actual text and its context: 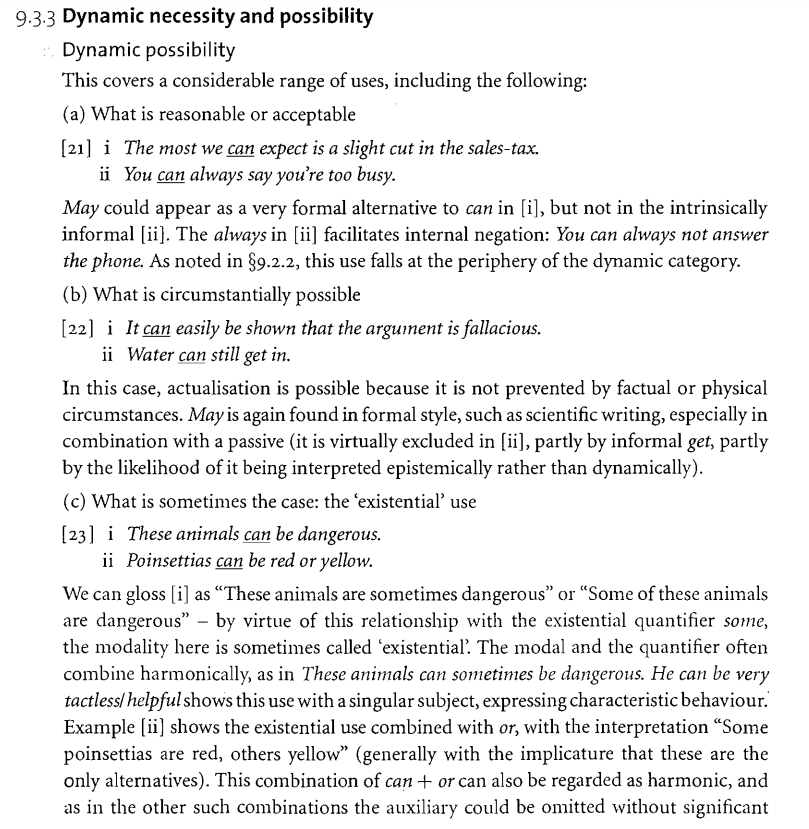 As can be seen, Huddleston & Pullum are of course saying that such a sentence is perfectly fine. However, they note that we're unlikely to see this kind of sentence with may in a formal academic text. Although may is more formal than can here, get in is a rather informal idiom, and this particular example would be ambiguous with may, because it would likely be interpreted as conveying epistemic instead of dynamic modality.

To see the difference between dynamic and epistemic meanings consider @Edwin Ashworth's examples (one of which modified):

Notice that the text says absolutely nothing about deontic modality (i.e. any ideas about permission or anything like that).

Not the answer you're looking for? Browse other questions tagged grammar modal-verbs pragmatics or ask your own question.

7
Does the use of present perfect continuous with a time reference in the past imply an intention to finish, and if yes, how to avoid it?
15
Do serious grammarians endorse the “Can I”/“May I” distinction?
0
Can “may” be an infinitive
0
If Oswald didn’t shoot Kennedy someone else will have