What is the name of this puzzle commonly found in puzzle books?

I'm looking for the name of puzzle in the picture below, commonly found in puzzle books. 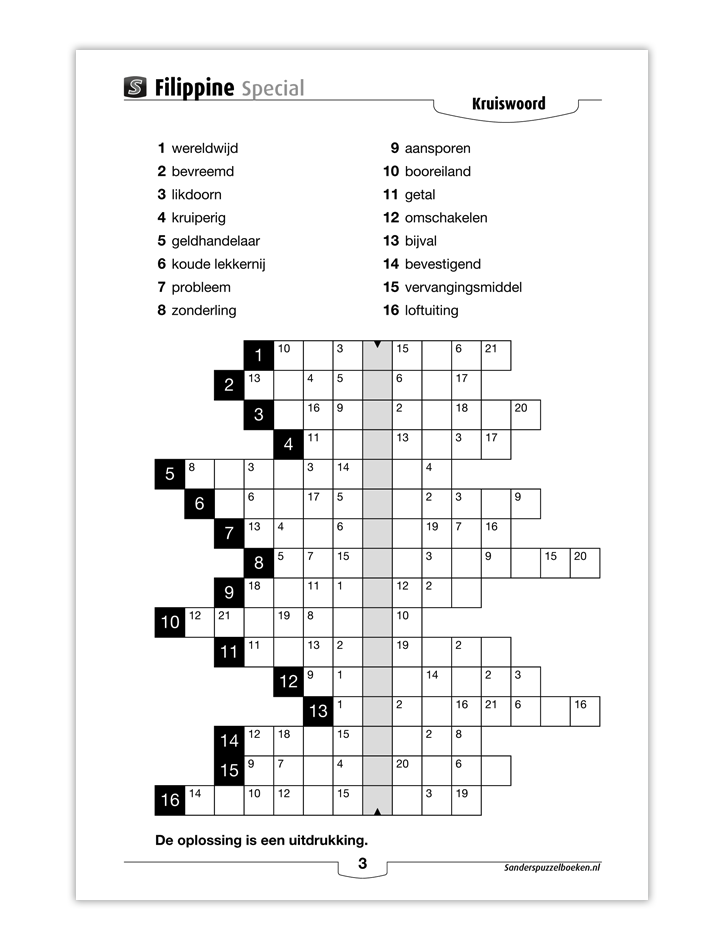 In Dutch, it's called a ''filippine''. It has its variations, including anagrams, rebus, trivia questions, crossword clues, and so on, but the construction of the puzzle is the overall the same and pictured above. I've tried looking with queries such as ''list of puzzle book puzzles'' and ''equal numbers are equal letters'', but with no result. The evident ''filippine english'' only leads me to Google correcting is to ''the Phillipines'' (and its ''Filipinos''). I'm even wondering whether these types of puzzles are even known in English-speaking countries, or that this puzzle is just a Dutch thing?

Edit: psosuna asked me where the word filippine comes from, so I will (try to) translate the section of ''Oorspronkelijke betekenis'' (Original meaning) on the Dutch Wikipedia page on 'Filippine' partially:

"A filippine is an almond nut with two seeds, and it was a game that whoever found such an almond should share it with their neighbour under the silent promise that they, at their next meeting, should greet each other with ''bonjour filippine''. The one who did that first was the winner and will expect from the other a small gift. The promise could also be that the two will write each other on a particular date. The promise itself is also called a filippine. [Followed by an not-so-relevant quote from Martinus Nijhoff.] The word filippine or filippien is thought to originate, through the French philippine, from the German Philippchen , a bastardization from Viel-Liebchen (many love).

The puzzle is a form of acrostic. There are several types of acrostic, most common these days being something more like a codeword puzzle but the original acrostics going back at least 2000 years were pieces of writing where the initial or final letters of each line formed a word. A good example is the ICTHYS acrostic used by the early Christian church where the letters of the Greek words for Jesus Christ Son of God Saviour form the Greek word for fish. This acrostic is discussed in the Wkipedia article under the above link.

We call that puzzle 'CROSSWORD' in English...

0
How to understand this film name 'Tron: Legacy'?
9
Is “sb.” a commonly accepted abbreviation? What does it mean?
5
what does “lost a shilling and found a penny” mean?
3
What does a library mean other than a place for a collection of books?
0
“restart” vs “reset” in the context of a game or puzzle
0
Is “more commonly” the same as “most commonly”?