When did 'Robot' start implying a machine?

The word 'Robot' originated from a Czech author, Karel Čapek. He first uses the word in a play where robots are manufactured biological entities said to lack independent thought.

However, after the word was introduced to English to mean some sort of manufactured biological slave labour, the word's meaning changed to exclusively mean a human-like machine.

When did the word robot change from meaning a biological entity to meaning a mechanical entity?

As of right now, the earliest example of "robot" referring to a mechanical (i.e. non-biological) machine that I found is from The Sunday Times (London, England) on Sunday, December 16, 1923. It's an article entitled "Robot Pilot" which refers to a system of compasses and an electric motor that "enables a ship to steer itself". Here's a screenshot of the article.

I also found another early instance of "robot" referring to the movie The Chess Player (1927). Specifically, the Illustrated London News (London, England), Saturday, April 16, 1927 discusses the film in an article entitled '"The Chess-Player": A Dramatic French "Robot" Film of 18th Century Poland to Be Seen in London.' I'm pretty sure that the automatons are played by actual people, but they're intended to be automatons (although I think the chess automation is being controlled by a person under the table).

"The first robot put to useful work" (according to Wikipedia) was the Televox, introduced to the public in 1928 and pictured on the right in this picture (also from Wikipedia): 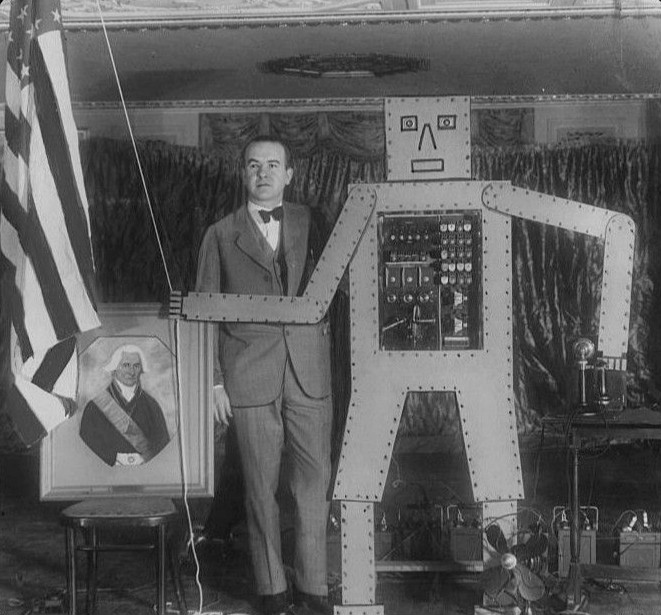 There are a lot of articles from slightly before the Televox was released to the public. And from that point, usage of the word in this sense takes off.

A ‘televocal’ electrical robot, which..can answer the telephone, tell the height of water in a reservoir, open doors, switch on lights and perform other mechanical services.

The New York Times, Oct 23 1927 describes the televox as "nearest to a robot", later in the article describing how they would build their own "robot", which would have things like wheels and a little door at the back that exposes something that looks like the "interior of an adding machine".

I found some other articles from 1928:

And another one that talks about a robot that shoots:

Light, speedy tanks, fast armored cars and a new mobile anti-aircraft battery equipped with an electric "Robot" that not only computes firing data but automatically aims the guns at the aerial target
Chicago Daily Tribune Oct 5, 1928

Another notable thing that happened in 1928 was the unveiling of Eric the Robot. Further information about Eric can be found here.

Yes, originally the term robot was used to refer to what we today would call androids:

The modern meaning of the word ‘robot’ has its origins in a 1920 play by the remarkable and fascinating Czech writer Karel Čapek. The play, titled R. U. R. (Rossum’s Universal Robots), begins in a factory which manufactures artificial people, the ‘universal robots’ of the play’s title.

Curiously, the robots which feature in Rossum’s Universal Robots aren’t really robots – at least, not if we’re being picky and technical. They are closer to androids or cyborgs than robots, because they can be mistaken for real people (again, think of the Terminator in his/her many incarnations). So the first ‘robots’ in literature to be so named were, in a sense, misnamed – or rather, we’ve been misusing the term ever since. Such is the way language develops.

It appears that the “mechanical” sense developed decades later, probably on the concept of robotics, first introduced by Asimov in 1941 in his story “Liar”:

According to the “Robot Institute of America,” 1979, “A robot is defined as a reprogrammable, multifunctional manipulator designed to move material, parts, tools, or specialized devices through various programmed motions for the performance of a variety of tasks.” Webster’s dictionary simplifies the definition by stating that, “a robot is an automatic device that performs functions normally ascribed to humans or a machine in the form of a human.” A robot is described as a machine designed to execute one or more tasks repeatedly, with speed and precision. There are as many different types of robots as there are tasks for them to perform.

Not the answer you're looking for? Browse other questions tagged history or ask your own question.

13
When did the word "so" begin to be used to start a sentence?
15
When did "World War 2" start being called "World War 2"?
4
When did the term 'microcomputer' become obsolete?
6
When did "consumption" become "tuberculosis"?
2
When did "Pensylvania" become "Pennsylvania"?
11
When did initial-origin words (PRONOUNCED AS WORDS) start happening?
5
When did 'virgin' start referring to non-alcoholic drinks
12
When did Monkeys start making wrenches?