What is the verb or expression for describing some kids in this situation? 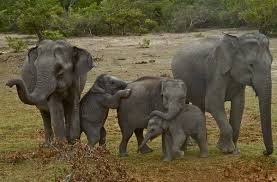 Suppose there are some naughty kids who are playing with each other in a room, they nudge each other and wrestle and climb (?) on each other! I want to tell them to stop. Which verb should I use? "Hey kids! Stop ...?" (Like the baby elephants in the picture.)

I also want to know if there is some verb that describes the activity shown in the second picture; "A group of refugees are ....(verb) for their gifts."

1.) My parents were always yelling at my little brothers, "Hey kids! Stop that roughhousing!" Other colorful words usually accompanied these demands, but I'm saving those for another OP. 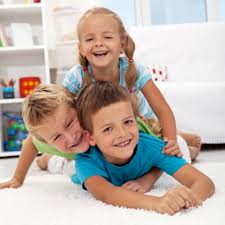 roughhouse verb: gerund or present participle: roughhousing: act in a boisterous, violent manner. "in front of the stage hundreds of teens and young adults roughhouse, flinging themselves into each other"

PS - In more or less the same vein there is, "grab-assing"; i.e., The boss was furious because his employees were always grab-assing instead of working.

2.) The crowd of people in the second picture are "jostling" for with each other to get into a better position to receive whatever those goodies are that are being handed-out to the crowd.

jostle verb: gerund or present participle: jostling: to push, elbow, or bump against (someone) roughly, typically in a crowd. "passengers arriving and departing, jostling one another"; "jostled by the crowd"

• struggle, vie, jockey, scramble, crowd one another. "media empires jostle to catch the eye of Asian readers and viewers"

• struggle or compete forcefully for. "a jumble of images jostled for attention"

Rough or rowdy play that can often result in unintentional physical harm.

Not the answer you're looking for? Browse other questions tagged expressions verbs or ask your own question.

5
Meaning of the expression “2.1 kids”
3
On the expression “some… and not others”
1
A single verb that means two entities mutually supplement one another
0
Better verb describing making the bed
9
Could you clarify “Performative verbs”? Can the utterance “I run” be grammatical if I am running & at the same time saying it
1
Expression for 'to persist through a situation unwillingly'