"Canary in coal mine" in a word

Is there a single word to describe the canary in the phrase "Canary in a coalmine"? The best I can come up with is sentinel, but I'm nearly positive there's a more precise option.

Edit: To clarify I'm not looking for words that describe the canary but rather for a word the encapsulates the entire phrase. That is, I don't want to finish the phrase "the canary is a ...". I do want to finish the phrase "$PERSON was a ..." where the blank implies as many of the attributes of the proverbial canary as possible (e.g. going down the dangerous road first, warning those that follow, connotations of captivity, &c). I'm reluctant to use the phrase, or "canary" as it strikes me too colloquial/lighthearted for the work at hand.

It also means alarm but the ominous quality makes it appealing in this case.

Example in the news: "Tiny wireless sensing device alerts users to telltale vapors remotely". The word can be used as a noun or adjective.

Bellwether, I believe, would be appropriate for such a use.

I think just "Canary" can be used here, this usage has become so common when one says canary people will understand that you refer to this meaning. Have a look at usage 6 here http://en.wiktionary.org/wiki/canary

The canary is acting as a guinea pig, in that term's sense, “A living experimental subject” [wiktionary]. The term lab rat has a similar sense. (Also see What's another word for Guinea Pig, i.e. when you call someone a "test dummy"?.)

You might also consider the term point man, in its sense “the soldier who takes point; the soldier who assumes the first and most exposed position in a combat military formation; the lead soldier/unit advancing through hostile or unsecured territory”. This term also appears in wiktionary's example for use of the previously-mentioned word expendable:

Private Johnson was afraid the Lieutenant considered him an expendable, since he was always picked as point man.

Depending on your context, I would suggest Scout, Vanguard, or Pawn.

A person sent out ahead of a main force in order to gather information.

This usage fits the notion of a "canary in a coal mine" because the canary is an active information source for those carrying it.

The forefront of an advancing army.

Usually, the vanguard occupies the most precarious position in a battle. They can report on enemy positions, strengths, etc., as a Scout might, but they are meant to actively engage in the combat. And, as the "first on the scene" they have the potential of suffering high casualty rates.

A person used by others for their own purposes. In chess, a piece of low value, often sacrificed for better position or to gain tempo.

In my mind, a Pawn is a combination of Scout and Vanguard, and perhaps the closest to the general role of the canary. The pawn, like the canary, is often a victim of circumstance whose well being is certainly not under its own control.

A person or thing that foreshadows or foretells the coming of someone or something.

It really depends on what you trying to communicate, but a person, who does some of the things are allude to, depending on the context, may be referred to as a "harbinger". 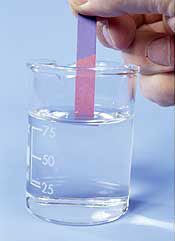 A litmus test is a piece of paper that is dipped in a solution to test whether the liquid is basic or acidic.

It has come to mean any general test to immediately test some condition.

Whether I can I summarise the candidate's core strengths within two minutes of reading his CV, became my litmus test of whether I would consider him for the position or not.

A canary in a coal mine is a kind of probe which is used to provide early warning or test something.

The original phrase originates from miners using caged canaries when they went down a potentially dangerous mine shaft. If the mine shaft contained dangerous amounts of gases such as methane or carbon dioxide, the canary would show signs of distress or die first, providing the miners with early warning to escape immediately. (See here and here.)

A newer use is in software development, where a "canary" version or "canary test" may be shipped to a market to test some new feature or other change to the software. Feedback from users will then be used to determine further actions. (See here.)

In summary, I would suggest that the single word probe is suitable in many cases.

In terms of the meaning of "one who announces danger" you could also use:

with lookout and watchtower having the extra connotation of staying in a given place to perform that duty, much like a canary in a mine would. "Harbinger" might have the effect you are looking for, as it is generally associated with the phrase "harbinger of death", which is what the canary was used as (if the canary died, it was due to lack of oxygen, and if the miners didn't get out of the mine quickly, they were next).

A wire stretched close to the ground, working a trap, explosion, or alarm when disturbed and serving to detect or prevent people or animals entering an area.

For a sample usage where "tripwire" is used to refer to an "early warning system", see the Lee Child/Jack Reacher book "Tripwire".

I'd suggest, with some irony, cockatoo - informally used for "a lookout posted by those engaged in illegal activity".

The purpose of the canary is that it dies before the humans do. This makes it a deliberately introduced failure point. So a good analogy is a domestic fusebox. This has fuses, delicate wires that fail in the event of a power surge thus protecting the more important electrical goods in the house.

I say 'fusebox' rather than 'fuse' because 'light the fuse' already has other connotations.

The phrase canary in a coal mine comes from an actual practice of taking a canary into teh mine shaft. If the canary died it meant there was carbon monoxide present and was a warning to leave for a better ventilated place.

A precursor is a thing or condition that comes before something malign. The components of the word signal its meaning. Pre means before; cursor denotes the malignity although its primary meaning in other contexts is not bad. (Just look at the pointy thing moving around on your computer screen)

A canary in a mine can be thought of as an Oracle. In ancient times, the Oracle was an expendable entity to go to, to get any type of an alarm, or some type of alarming prediction.

From Wikipedia on Pythia:

The Pythia … was the name of any priestess throughout the history of Temple of Apollo at Delphi… the new priestess was selected after the death of the current priestess.

Some interesting history might include these Oracles were perhaps underground, or close to a source of toxic gas that gave them their "powers", and made them quite expendable according to some theories

I really like many of the answers here, but I suppose your choice depends on the exact context of the use of this word.

0
What is a synonym for canary? (being a fail bird that dies as an warning indicator)
6
What's another word for Guinea Pig, i.e. when you call someone a "test dummy"?
2
Need to find the specific term used for someone who has something unexpected and bad happen to them and who then alerts others to be on the look out
0
Where and when did the use of the word Canary to represent an early version of software originate?

8
What is the warning that you're almost done called?
0
Organizing into dimensions
1
Word to describe something of something of something
14
Word for having strong political opinions but no consistent "side"
0
Single-word alternative to "that required intervention"
0
Single word for "give custody": to custode?
0
Word that means the barrier or transition between life and death
0
Is there a word or words to describe a workplace where employees end up managing managers?