I am reading Uncle Tom's Cabin. When Eliza realizes she and her son will be split up by a business deal, she runs away with him during the night. In the ensuing commotion the next morning, a boy named Andy says to a man named Sam,

"Why, you don't know, I s'pose, that Lizy's cut stick [emphasis added], and clared out, with her young un?"

In the source above the annotation to this quote cites "to cut stick" as meaning to make off, a term that can mean to depart in haste. Further, other sources offer the following definition for "to cut stick":

to make off clandestinely or precipitately

I have my suspicions of etymology, the most defensible being that "to cut stick" has to do with making some piece of a runaway's paraphernalia, such as a bindle or walking staff. But I have been unable to find any sources to corroborate or contradict this possibility.

Do any formal sources shed light on how to cut stick is related to running away secretly and quickly?

Edit: After some more research, I think I may have come up with a more defensible suggestion. It may be that the idiom is similar to cut class, which has no physical imagery (i.e., the students are not literally cutting anything). A direct analogy with cut class seems unlikely, given the definitions I've found of stick, since the use of stick most likely to mean location or event is the pluralized form sticks (definition 14)

But stick can mean "a threatened penalty" by definition 12. It may be that the phrase to cut stick implies running away from a punishment, hence the haste and secrecy. But this seems like a reach because none of the definitions I found of to cut stick explicitly mention punishment. 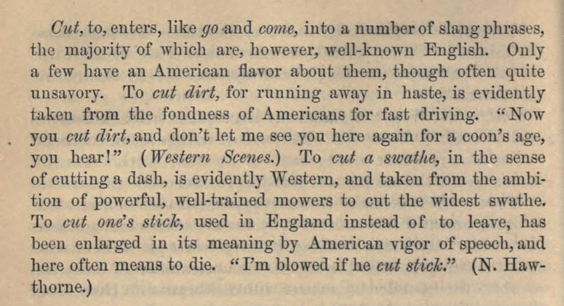 The OED has the British English sense of departing from 1825 but with no etymology.

The Wordsworth Dictionary of Phrase and Fable (2001) based on the original by Ebenezer Cobham Brewer (1810 – 1897) offers an Irish origin:

I must cut my stick--i.e. leave. The Irish usually cut a shillelah bfore they start on an expedition, Punch gives the following witty derivation:--

"Pilgrims on leaving the Holy Land used to cut a palm-stick, to prove tey had really been to the Holy Sepulchre. So brother Francis would say to brother Paul, ' Where is brother Benedict ?' 'Oh (says Paul), he has cut his stick ! ' — i.e. he is on his way home."

Further antedatings can be found in Othello-travestie: In Three Acts, with Burlesque Notes in the Manner of the Most Celebrated Commentators and Other Curious Appendices by John Poole (and William Shakespeare) (page 8):

And in the extensive footnotes: 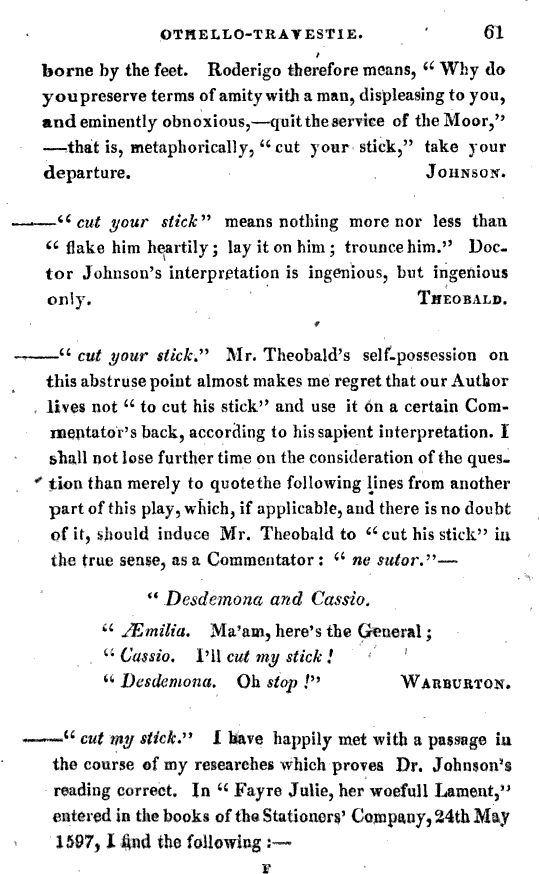 Given the subtitle of the book -- "with Burlesque Notes in the Manner of the Most Celebrated Commentators" -- I don't think we can trust these notes to be real, and therefore the 1597 to be fictional, but they are at least 1813 examples.

I found a citation for De Quincey, in fact multiple citations to "De Quincey".

The quote links to "2. To cut one's stick" as a synonym for death.