Etymology of the phrase "Twenty-three Skidoo" as used in "Hey Arnold!"

The phrase “Twenty-Three Skidoo” has a very interesting and mysterious history described very thoroughly by the wikipedia article on the phrase.

However, this article seems to indicate it’s usually used as a phrase to mean “Let’s get out of here in a hurry!”

The place where I have heard this expression used first, and most firmly in my memory, is from an episode of “Hey Arnold!”, involving the passing of a comet, and the declaration, upon seeing it, of said phrase.

This confuses me, and a number of my friends who have seen this show, since it seems to suggest a very positive or excited expression, when the actual expression seems to be one of fear or distress.

So where does this more positive use of the phrase come from? And is there a more definite origin of “Twenty-Three Skidoo” that goes unmentioned by the wiki article?

Here's a reference from The Wars of the Godly (Reuben Maury, 1928)

...it will remain alive as a jewel of American folklore until the word Mac shall go to join "Twenty- three, skidoo!" and "O you kid!" in the junk shop of the American argot.

As that clearly indicates, the expression was considered passé even then. In actual fact, prevalence peaked during/after WW2, but since it's really just a fairly uncommon "catchphrase" (that seems to be enjoying another revival today) it doesn't necessarily have a clear or consistent meaning.

As the Wikipedia article says, it generally has associations with the concept of [leaving] quickly, which means it's perfectly credible for someone to come out with it in a context where they mean something like "Wow! That was really fast!"

There was a mechanical three-wheeled twelve-column number puzzle vintage 1905 printed on a card titled "SKIDOO 23 PUZZLE" where the wheels would have to be aligned so that all columns would add up to the number '23'. 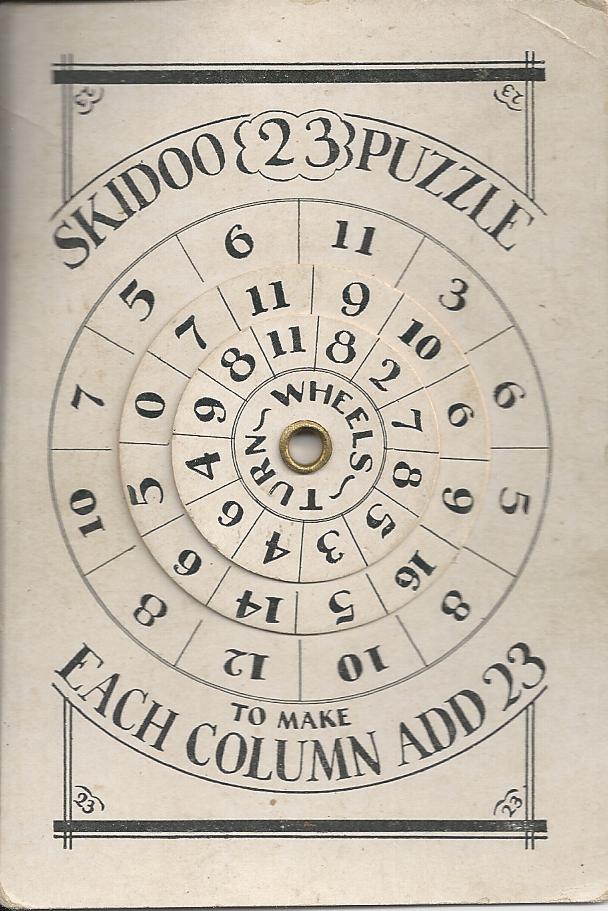 Maybe this bit of information can help crack the mystery of the elusive phrase: "23 SKIDOO".

Unless I'm missing something, there appears to be no solution to this puzzle.

About as much of a mystery as the origin of "23 skidoo" itself.

Wentworth & Flexner, Dictionary of American Slang (1960) has a lengthy and interesting entry for this term, which I had mistakenly thought was connected to the year 1923:

twenty-three skid(d)oo! 23skid(d)oo! exclam[ation] A mild expression of recognition, incredulity, surprise, or pleasure, as at something remarkable or attractive; also used as an expression of rejection or refusal, sometimes as = "Go away!" "Beat it!" or "I don't care!" [Example from] 1926: "[Approx. 25 years ago] appeared in my vocabulary that effective but horrible '230Skiddoo.' Pennants and arm bands at shore resorts, parks an county fairs, bore either [23] or the word 'Skiddoo.' In time the numerals became synonymous with and connotative of the whole expression." C. T. Ryan, A[merican] S[peech], 2/92. Like "shoo-fly," "twenty-three skiddoo" was often used without specif. meaning. It was in male use c1900–c1910, orig. among students and sophisticated young adults. It was perh. the first truly national fad expression, and one of the most pop. fad expressions to appear in the U.S. Almost fifty years after it has had any serious use, it is still universally known and remembered. Ironically, it is now assoc. with the 1920's and is freq. used to convey the spirit of the 1920's in novels and plays of the period.

Interestingly, the third edition of Dictionary of American Slang (1995), thoroughly rewritten by Chapman & Kipfer, doesn't have an entry for "twenty-three skiddoo" at all.

Hendrickson, The Facts on File Dictionary of Word and Phrase Origins (1997) echoes the Wentworth & Flexner description of the term's meaning and historical context, and then offers this comment on its origin:

As for its derivation, it is said to have been invented or popularized by that innovative early comic-strip artist "Tad" Dorgan [who is also said to be responsible for coining hot dog and yes man, among other terms] Regarding its composition, skiddoo may be a shortening of the earlier "skedaddle." Twenty-three is a mystery. Perhaps it was a code number used by telegraphers. There is even a theory that it "owes its existence to the fact that the most gripping and thrilling word in A Tale of Two Cities is twenty-three": Sidney Carton, the 23rd man to be executed on the 23rd of the month.

One of the earliest uses is in a 5th April 1906 review of Cohan's "Little Johnny Jones" vaudeville show in the Los Angeles Herald:

Tom Lewis as The Unknown is responsible for most of the good ones and his "23," "skiddoo" and a few others never failed to bring forth the intended laughs.

It soon became one of the earliest if not first fad phrases, and was popular amongst schoolchildren. Something to do with 23 could be referred to as a skiddoo: a class of 23 children was a skiddoo class. Fire engine number 23 was the "Skiddoo" engine. There was a joke 23 Skidoo Avenue, it was used in adverts for a pharmacy, a "23 Skiddoo Sale" was to make way for more stock in womenswear and a menswear shops, you could buy a 2c badge, another "very neat and attractive badge; made of gold and German silver" had "America's craze saying" on it, sailors used it as song lyrics, a a baseball club was declared 23-skidoo, it was a joke punchline, it was a name of a puzzle which resulted in a "skidoo problem editor buried deep in mail". All these from 1906.

Even before this "23" and "skiddoo" had been associated and can be found used close to each other in October 1905, January, February, March and April 1906. Some of these show both meant to skedaddle, to leave quickly. In fact, the fire engine article was just a couple of days after the vaudeville one, so they were already closely related.

Not the answer you're looking for? Browse other questions tagged meaning etymology phrases expressions meaning-in-context or ask your own question.

0
The phrase "to pour cloud water"
4
Why is it "the day is young", not "still early"? What is the history of the phrase?
3
The Origin of "Killing It"
8
Origin of "to bone up on something".
1
What's the origin/etymology of the phrase "regular old"? Does it have a clearly defined meaning?
1
Can the word "unsettling" be used in a positive sense?
1
Is there an English expression for the German phrase 'per Knopfdruck'?
4
Bada bing, Bada boom; Is it that easy?