What is the difference between "wriggle room" and "wiggle room"?

Google N-grams seems to back this theory up too. 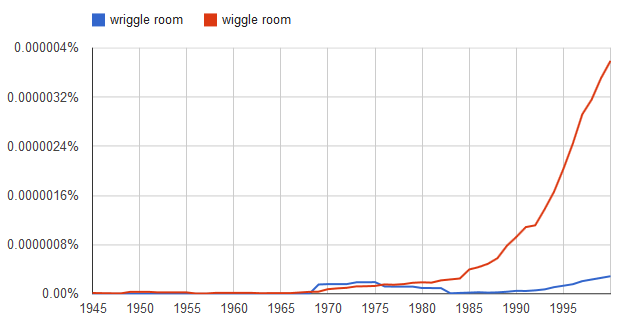 And what's more, it seems to suggest that both phrases first appeared at around the same time.

The dictionary definition of wriggle seems to be subtly different from wiggle- Wriggling implies an intention to move somewhere, whereas wiggling does not.

So, what — if anything — is the difference between the two phrases? And is there any evidence that one came before the other?

Safire discussed wiggle room in a column in the early 1980's. In his 2004 column, he remarked:

To wiggle is to move from side to side, or to and fro; from this we get wiggle room, defined in this space 20 years ago as ‘’an implicit opportunity for later flexibility . . . not quite an ‘escape hatch’ or a ‘way out.’’’

For these two decades, wiggle room has been continually challenged by wriggle room, which has the advantage of alliteration. However, wriggle (from Old English wrigian, root of awry) means ‘’to squirm, writhe, move sinuously,’’ as distinct from wiggle, which denotes back-and-forth motion, not necessarily twisting.

I’m not knocking wriggle, which -- when followed by out in diplomatic parlance -- vividly calls up the picture of sneaky evasion by artifice. But when paired with room, wriggle has not succeeded in dislodging the more limited, precise and less pejorative wiggle.

Note that ngrams for wiggle room,wriggle room shows instances of wiggle room occurring in the 1890's, and wriggle room not appearing until the 1960's. The ngrams shown in the question, with its 1945 starting date, is misleading with respect to dates of first usage.

A 2011 thread in the Eggcorn Forum quoted from Safire's 2004 column, and went on to point out:

... “Wriggle” and “wiggle” are not historical cognates – they are frequentatives of two independent Teutonic verbs. The meanings of “wriggle” and “wiggle” have a lot of overlap, but there are differences: “wriggle” hints at a random motion, often one with some writhe or twist to it, while “wiggle” points the listener toward a more two-dimensional back-and-forth movement.

While “wriggle room” is a debatable eggcorn, a switch in the opposite direction (“wriggle >> wiggle”) is a better eggcorn candidate. The idiom “wriggle out of,” meaning to contrive to avoid something, came into common use in the mid-1800s and peaked in popularity during the 1920s. About the time it peaked, the phrase “wiggle out of” began to be used in the same sense. It is possible that the post-1920 decline of “wriggle out of” represents, in part at least, its replacement by “wiggle out of.” If “wiggle out of” is an eggcorn, it is a highly successful one: the COCA database suggests that the metaphorical uses of “wriggle out of” and “wiggle out of” have appeared in print with about the same frequency over the last decade.

A 2004 straightdope.com thread suggests, and I think refutes, a “pondian” difference in usage (ie, British English versus American). Among other items it includes a chart based on counts of web pages containing instances of color or colour along with wiggle room or wriggle room. If colour is a good indicator of BE usage, then the ratio of wiggle room over wriggle room is similar in both BE and AE:

I prefer "wriggle room" because it's a better match for the meaning of the phrase. "Wriggle" implies trying to create a bit of space, or freeing oneself from some contraint, whereas "wiggle" is a more general description of a certain kind of movement. Plus "wriggle room", as an alliteration, sounds better IMO :)

I have seen wriggle in writings, but I doubt that I have ever heard it used in everyday speech, whereas wiggle is commonly heard.

Not the answer you're looking for? Browse other questions tagged etymology comparisons or ask your own question.