When and why did English stop pronouncing ‘hour’ with an [h] like its spelling still shows?

As a non-native speaker, I had been pronouncing hour in the literal, letter-by-letter way as [ˈhaʊə(ɹ)]. Then I learned that its written h is silent in speech, and that you therefore needed to say an hour instead of a hour.

However, I also noticed that during the 18th century, some British media such as The Literary Gazette used to use a hour not an hour in their printed publications of several hundred years ago, indicating the word started with a consonant sound at that time: 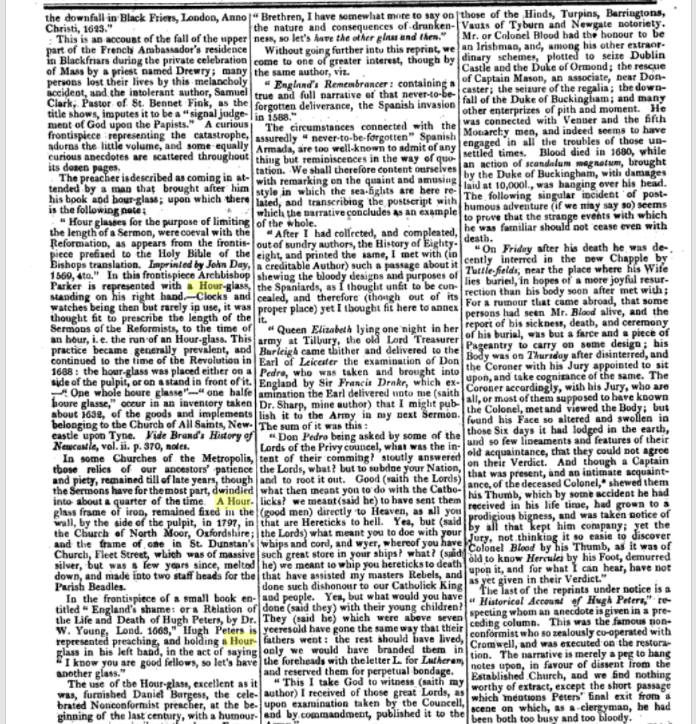 I am not sure why but I suspect that the now-silent h in this word is a really modern change to English, and that not so very long ago hour was pronounced exactly the same way as it is still written today: [ˈhaʊə(ɹ)].

Or is this just an incorrect and repeated typo in that page from The Literary Gazette from the 18th century? If English really did pronounce it [ˈhaʊə(ɹ)] once upon a time, then when and why did this hypothetical change not to pronounce it with [h] occur?

I am not sure why but I suspect that the now-silent h in this word is a really modern change to English, and that not so very long ago hour was pronounced exactly the same way as it is still written today: [ˈhaʊə(ɹ)].

This does not appear to be the case. The word hour is ultimately from Latin hora, but it came into English through Anglo-Norman French, and (as tchrist said in a comment) we have evidence that the word lost the original [h] sound long before it ever entered English. The loss of Latin [h] occurred in all Romance languages, suggesting this loss was shared and therefore occurred early on. Furthermore, we have early spellings in Romance languages that lack the letter H. Any cases of the word being pronounced with /h/ in English must have originally been spelling pronunciations. It is very possible for a spelling pronunciation to spread and become established as the standard pronunciation of a word, but this does not seem to have ever happened for hour.

This system had already developed centuries before then, although some small details of the system have changed over time (some details remain variable even today). The works of Shakespeare, created more than 200 years earlier, show the two forms a and an distributed based on whether the following sound is a consonant or a vowel.

The search tool at OpenSourceShakespeare shows a clear contrast between heart and hour, suggesting that in Shakespeare's time, as today, the first started with the consonant /h/ and the second started with a vowel:

Caveat: I haven't consulted original documents of Shakespeare's work to check these results. Open Source Shakespeare is based on Moby Shakespeare, which normalizes the spellings of Shakespeare's words based on modern spelling. I'm not certain whether the use of a vs. an was affected by normalization according to the modern a vs. an rule; however, my guess is that it was not, as you can see from that search tool that Shakespeare's uses of "an hundred" (10 total hits there), which is nonstandard today, evidently have not just been normalized away to "a hundred".

Or is this just an incorrect and repeated typo in that page from The Literary Gazette from the 18th century?

It seems most probable that it is a typo, or if not, something similarly erratic. Note that you can find "an" used on the same page in "the run of an Hour-glass" and in "the time of an hour", so even though "a Hour-glass" appears more than once, it does not appear consistently in that text in place of "an Hour-glass". Therefore, the occurrence of three examples of "a Hour-glass" is puzzling, but not very clear evidence that "Hour-glass" was actually pronounced with /h/ by the author of that text.

There are a number of other words borrowed from the French where we also don't pronounce the /h/, e.g. honest and heir. The /h/ in herb used to be silent as well, and still is in the U.S., but in England people started pronouncing it on account of the spelling.

I can't account for the usage "a hour" in The Literary Gazette, but I can note that it was incredibly uncommon then. See Google Ngrams. Possibly it was overcorrection by a writer or typesetter who didn't pronounce any /h/s in English (this has been a feature of some English dialects for several centuries).

Not the answer you're looking for? Browse other questions tagged pronunciation historical-change or ask your own question.

20
What was going on with "quha", "quhat" and the like in Scots and English?
0
Rationale behind pronunciation of "subtle"
9
Which does English “l” and “r” sound come under, an allophone or different phonemes?
6
Where did the L in talk go?
0
The King James edition of the Bible, 'an Hebrew'
9
Why has the "plague" on our houses become a "pox?"
31
Is there an etymological explanation for the silent ‘g’ in “paradigm”?
2
When did spelling "-ic" words "-ick" start/stop being popular?
1
Why is the L silent in "walk" but not in "bulk"?