Why is a vehicle's empty weight called its "curb weight"?

the weight of an automobile with standard equipment and fuel, oil, and coolant

Why is this weight called a vehicle's curb weight?

Curb weight (US) or kerb weight (UK) is the weight of a car parked at the kerb with standard equipment, oil, water, coolant, petrol but without passengers or goods. Some definitions say a full tank of petrol, but some just say some petrol. It comes from the idea of a car parked by the kerb and ready to go, but waiting for passengers and extra luggage.

The earliest example in the OED is of the UK spelling in 1958, but Merriam-Webster's Collegiate Dictionary (2004) dates the US spelling to 1949 but I found examples in the early 1930s (and possibly in the late 1920s).

This is a snippet of Society of Automotive Engineers Transactions (1929), so the date could be wrong (but it looks ok). It contrasts "Curb weight, sedan" with a heavier "Weight, with driver and observer":

Ignoring snippets, the first verifiable examples are from almost identical adverts in the April 1933 editions of Popular Science and Popular Mechanics: 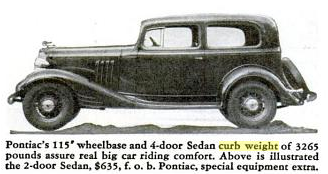 It's the weight of the vehicle, parked at the side of the road (at the curb), ready to go, but without any passengers or cargo.

2
What does "kerbside appeal" mean?

15
Why is it called "blind baking"?
12
Why is money called "rhino"?
8
Why PBS is called Big Bird as its byname?
2
Why the ring finger is called the third finger?
1
Why is Major League Off-Season called "Stove League"?
22
Why are "muscle cars" called so?
13
Why is wiretapping called "bugging" and since when?
5
Why are movie captions called "subtitles"?
2
Why is the exercise price of an option called a "strike price"?
3
What is the origin of "set" (noun) as used in "television set"? Tubes?