What does “patent rocker” mean?

He sat heavily in the patent rocker that was his and shucked off his wet tennis shoes.

A rocker is a chair. But what is a "patent rocker"?

It was a rocker of the vintage of the early nineties, and was of the variety called by the trade of that time, "a patent rocker." The rockers, instead of rocking on the floor, as modest, self-respecting rockers should, were arranged for action on a framework several inches higher. The straight, high back, the seat, and the awkward arm rests were covered with ...

Eastlake Platform Rocker
Also called a "patent rocker," this is a mechanical version of the usual upholstered rocking armchair invented about 1870. Chair has open arms fitted with pads; lower edges of side rails are cut in bold convex curves

There is an "1880's Eastlake Victorian Platform Patent Rocker - by Streit & Schmit" available for sale on eBay for USD 295. The entry includes pictures and notes:

You are looking at a 1880's Eastlake Style Victorian Platform Rocking Chair, aka Patent Rocker. This particular chair, made by Streit & Schmit, Cincinnati, OH is in very good condition. The original patent was issued on January 19, 1875 and Reissued on January 23, 1880. I have copies of the patent paperwork filed by Charles Streit that I will include with the chair.

So it appears that Steinbeck was referring to a particular type of rocking chair.

I think Andrew is right; I'd only like to add that the patent here probably refers to a swing-style rocker, sometimes called a platform rocker. Here's an excerpt from a Montgomery Ward catalog from the 1890's; notice the patent rockers on the right: 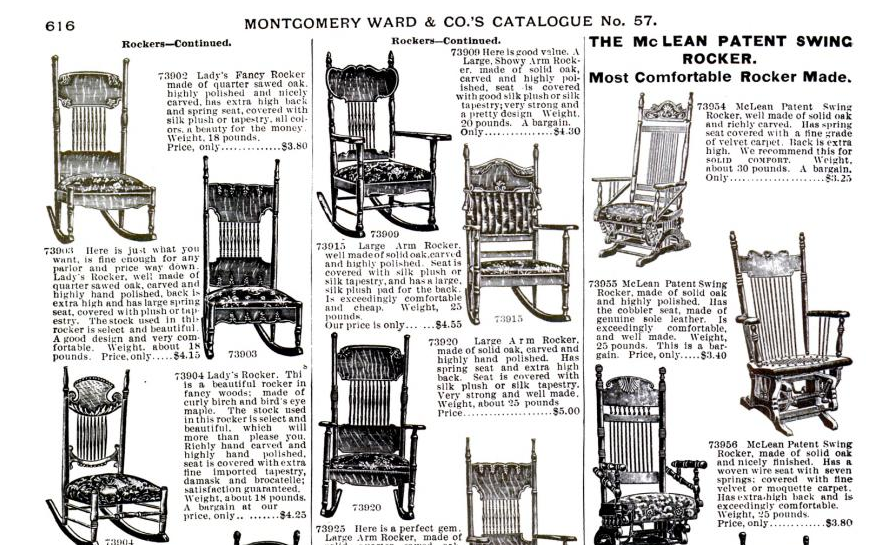 I'm not one of the Keno brothers, but it seems like these patents were issued in the late 1800's. Here's one for sale; note the comments by the seller on the side: 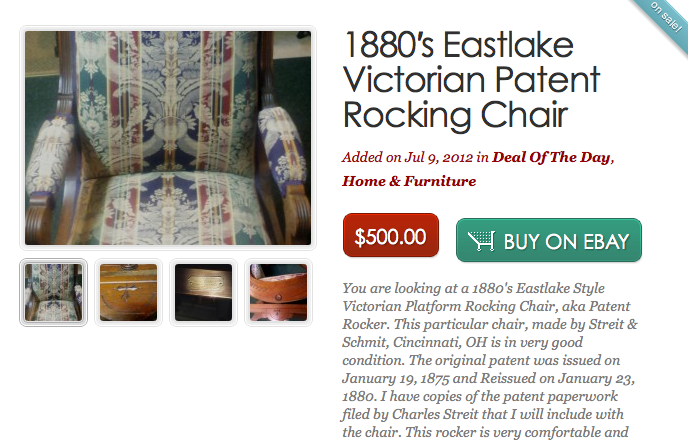 Given that Cannery Row takes place during the depression, and patent rockers seem to have been in their heyday beginning in the late 1800's, I initially wondered if this was Steinbeck's way of hinting that the chair was about 30 or 40 years old. However, it looks like using the word "patent" to describe this chair was the preferred way of saying it through the depression, so the chair could have been relatively new, but the author was merely using period language to describe it.

A patent rocker is a rocking chair whose design has been patented (protected by a patent).

3 made and marketed under a patent; proprietary:
patent milk powder