When did we start naming our dogs Rover, and why?

One stereotypical name for a dog is Fido, from the Latin for faithful.

Another stereotypical dog-name is Rover. How long has Rover been a common name for a dog in English?

Does it have anything to with the the famous Sea Dogs from the dawn of the Age of Sail, who would often do battle with sea rovers, if not indeed become such themselves? Were ships’ sea-dogs the first ones to be named Rover? 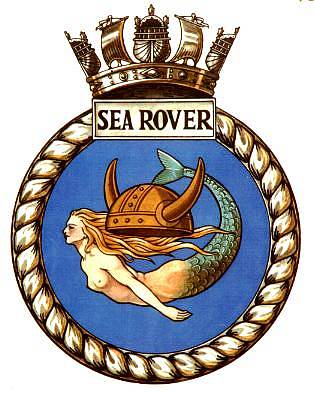 Another way to phrase the question is, during what period of English literature did Rover first begin to appear as a common dog’s name? 1300s? 1900s? There should be a discrete answer here.

The earliest dog named Rover I found is in a 1718 list of common names for hunting dogs.

Rover was a common name for a hunting dog in 1718, along with other names such as Bouncer, Fiddler, Gallant, Lively, Ranger, Ruffler, Soundwell, Trouncer, Traveller and Wonder.

The name is most likely from rover, n.2 in the OED, specifically sense 2a:

A person who travels from place to place without fixed route or destination, esp. over a wide area; a wanderer, a roamer; a nomad. Also: an animal which ranges over a wide area.

This is etymologically from the -er suffix applied to rove v.2, the first definition in the OED being:

To shoot at an arbitrarily selected mark, and senses deriving from this.

Etymology: Origin uncertain; perhaps a midland form corresponding to northern rave v.2, either as an analogical formation or as the non-northern reflex of a borrowing < the possible early Scandinavian etymon of rave v.2 (although this would imply a date of borrowing significantly earlier than either English word is attested).

On the other hand, the etymology of piratical rover, n.1 (cf sea-rover) is:

The school for children, or A selection of instruction and entertaining tales (1801) "from the French of" Vincent de Langres Lombard features a poem called "VERSES TO MY DOG, ROVER, WHEN GROWN OLD.":

And there's a song in The farmer's boy: a rural poem (1801) by Robert Bloomfield called "THE SHEPHERD AND HIS DOG ROVER":

Which was also printed in The Monthly mirror: reflecting men and manners (1801):

A General Dictionary of the English Language (1780) by Thomas Sheridan may offer an etymology. The definition for ranger gives both "a rover" (presumably human) and "a dog that beats the ground" as synonyms for ranger. Perhaps ranger was first applied to "dogs that beat the ground".

Poetical works (1740) by William Somerville (1675 – 1742) includes "The Officious Messenger, A Tale" which appears to feature a dog called Rover:

Ye world-makers of Gresham-hall,
Dog Rover shall confute you all ;
Shall prove that every reasoning brute
Like Ben of Bangor can dispute;

Rover, as heralds are agreed,
Well-born, and of the fetting breed,
Rang'd high,was stout, of nose acute,
A very learn'd and courteous brute.

With him obsequious Rover trudg'd,
Nor from his heels one moment budg'd;

The trusty Rover lay hard by,
Observing all with curious eye.

The servants, to the stranger kind,
Leave trusty Rover still behind.

Rover, who now began to quake,
As conscious of his foul mistake,
Trusts to his heels to save his life;

It appears in a list of "Hunters' TERMS, &c" in The compleat sportsman (1718) by Giles Jacob, and is given as a common name for a hunting hound: 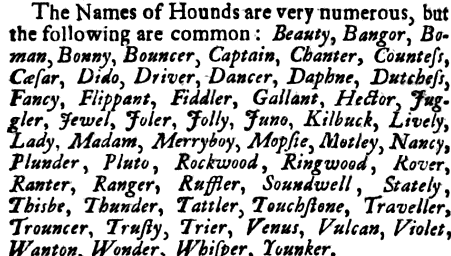 I have heard that the name "Fido" for a dog became popular when President Abraham Lincoln named his dog Fido. While looking for a reference for that, I found this page: http://www.dog-names.org.uk/american-presidents-dogs.htm which mentions Lincoln's dog and also says that George Washington had a dog named Lady Rover. They give no more information, but that choice of name would seem to imply that Rover was an accepted name for a male dog by that time. This page http://www.boogiepets.com/pet.php?name=Rover says that the first movie with a dog here was called "Rescued by Rover", made in 1905. That's over 100 years after George Washington, of course.

I couldn't find anything that said who the first dog known to be named Fido or Rover was, but at least these references push the date back. Every now and then I am surprised to find that something I thought was hundreds of years old was really invented just a few decades ago. Apparently not so here. I wouldn't be surprised if the question is unanswerable: unless the first dog with one of those names was famous for some reason, it might not be recorded.

6
What are the pronunciation and etymology of the dog's name "Tige"?

18
When did people start "boinking"?
2
When did dogs start "wagging" their tails?
2
When and why did "bug" start referring to illnesses?
2
When did the "sales pitch" start?
6
What are the pronunciation and etymology of the dog's name "Tige"?
12
When did "for days" start meaning "marvellous"?
41
Why and when did 'Down's Syndrome' change to 'Down Syndrome'?
12
When did Monkeys start making wrenches?
16
Why and when did "fowls" start being called "chickens"?