What is the term for groups of numerals within a large number?

I would like to give each of the 3-digit sequences a proper name, but I cannot find what the correct one would be. Would it be groups? I thought about thousands, but that seems imprecise.

I should clarify that I know what to call each individual group (thousands, millions, etc.). What I don’t know if there is a general term that applies to all the groups.

You seem to be looking for a generic term for subsets of 3 digits so if there is no specific, technical jargon for the collection of three digits within a larger number, then you might want to create/enlist/repurpose a term like "triplet" which communicates the sense of the three nature.

The precise term for such a group of three digits is a period. Thus you have the ones period, the thousands period, the millions period, etc. This is one of those wonderful terms we all learned (and then forgot) in primary school. 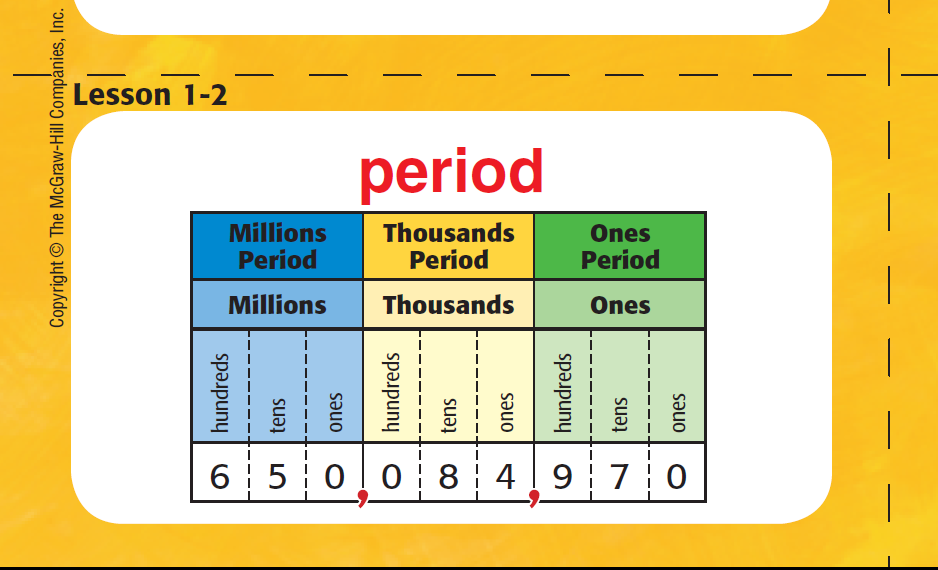 The term is in current use but hard to find in general purpose dictionaries. Here are some modern examples of the term defined in online arithmetic textbooks and study aids:

Note that the term is not of modern origin. The word period has carried this meaning for hundreds of years. Here is the relevant sense of period from NED (the predecessor of the OED, now public domain):

Here is the full NED entry for this sense of the word:

Period (pīᵊ·riŏd), sb. Forms: 5 peryod, paryode, 6 peryode, periode, 6– period: see also PARODY sb.² [a.F. période (14th c. in Hatz.-Darm.) = Sp. periodo, It. periodo, ad.L. period-us, a.Gr. περίοδος going round, way round, circuit, revolution, cycle of years, periodic recurrence, course, recurring fit of disease, orbit of a heavenly body, rounded sentence, f. περί around + ὁδός way; in ancient L. used only of the period or cycle of the four Grecian games, and of a complete sentence; in med.L. in other of the Gr. senses.]
III. In Grammar, Rhetoric, Music, etc.
13. Arith. A set of figures in a large number marked off by commas placed between or dots placed over, as in numeration, circulating decimals, and the extraction of the square or cube root.
1674 JEAKE Arith. (1696) 15 A Period is a comprehension of Degrees .. as 123 .. 12345, &c.
a 1677 Cocker’s Arith. i. § 10. 6 A Period .. when a Number consists of more than three figures or places, whose proper order is to prick or distinguish every third Place .. so .. 63.452.
1690 LEYBOURN Curs. Math. 4 Numbers .. of Three Figures, or Places .. may properly be called a Period.
1704 J. HARRIS Lex. Techn. I. s. v., A Period in Numbers, is a Distinction made by a Point, or Comma after every sixth Place or Figure; and is used in Numeration, for the readier distinguishing and naming the several Figures or Places.
1859 BARN. SMITH Arith. & Algebra (ed. 6) 76 The part [of a circulating decimal] which is repeated is called the Period.
—A New English Dictionary On Historical Principles (1888)¹

http://en.wikipedia.org/wiki/Decimal_mark#Digit_grouping refers to the comma or period that separates each set of numbers as a digit group separator, so it seems fair to call the groups themselves digit groups.

You might refer to digit groups as segments, meaning a contiguous part of something. Terms like metamere (“one of the similar body segments into which earthworms, crayfish, and similar animals are divided longitudinally”) and somite may also be used, somewhat figuratively. These two terms imply similarity of segments.

When you speak the number, you would say "One hundred twenty-three million, four hundred fifty-six thousand, seven hundred eighty-nine." The "millions" and "thousands" correspond well to the spoken number, and the "ones" goes without saying.

UPDATE OK, I see that you're looking for the group name.

I don't see a consensus on this, but here are some of the possibilities:

Not the answer you're looking for? Browse other questions tagged single-word-requests terminology numbers hypernyms or ask your own question.

7
English word for the comma between three digits