There have been times in my life where I've enjoyed kissing and cuddling. I'm sure many of you can think of times you've enjoyed canoodling on the couch. Especially in these colder months.

Now I'm reminiscing in my ivory tower, I wonder what the origin of the word canoodle is. Etymonline and Oxford Online Dictionaries both say "origin unknown".

Does anyone know where the word comes from?

Webster's claims that canoodle comes from the German knudeln:

Its earliest use is from a British source in 1859, claiming that the word is American, per the Etymonline link provided by OP.

Most other dictionaries claim “unknown origin” as well, many of them agreeing with Etymonline regarding when it was first used, and where.

Considering the large number of resources checked (all 21 links provided by Onelook), we could assume that the origin is, in fact, unknown, as only 2 out of 21 provided alternatives.

However, the possibility of the word having German origin is relatively high—we know that many Germans lived in the United States, since six million Germans immigrated to the United States between 1820 and WWII. On the other hand, this is mere speculation. It is likely safest to say that the origin is, in fact, unknown.

A Dictionary of Slang, Jargon & Cant (1889) by Albert Barrère defines it thus and offers a possible origin:

Canoodle, to (English and Amerito bill can), fondle, pet, dally, and coo.

I meet her in the evening, for she likes to take a walk
At the moment when the moon cavorts above,
And we prattle and canoodle, and of everything we talk.
Except, of course, that naughty topic love.

It may be influenced by the synonym firkytoodle. From the same 1889 dictionary:

Firky toodle (popular), to cuddle or fondle to firk, on the contrary, means to beat, to chastise. In the same way the French caresser, literally to caress, means also to beat.

The Oxford English Dictionary defines it:

intr. To indulge in caresses and fondling endearments. Also formerly trans., to persuade by endearments or deception. 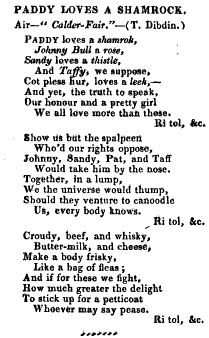 Together, in a lump,
We the universe would thump,
Should they venture to canoodle
Us, every body knows.

This is the former transitive sense as defined in the OED, to persuade by deception. Pettifogging is concerned with legal chicanery and petty quibbling.

I have what seems like plausible unsubstantiated theory: the Swedish form of this verb is "Knulla (as noted above)" which is the most commonly used term in Swedish for "to F@#k." I wonder if there is a connection to the English noun "knoll," as in "a grassy knoll," meaning a small hill--a HUMP, if you will. After all, the English slang "to HUMP," indicates roughly the same action as the delightful verb in question. Etymology Online gives the following etymology for "Knoll":

So it seems likely to me that "knulla" and the German words that became English/American "Canoodle" originally filled the same function as the etymologically unrelated English word "to hump" does.

(Besides, any suggestion that "canoodle" is a portmanteau seems pretty unconvincing).

I found this in The Alpha Dictionary:

[Canoodle] is yet another one of those words English borrowed from Yiddish (and never returned). Yiddish picked the word up from German knuddeln "to hug, pet".

English speakers do not handle the consonant combination KN at the beginning of a word as well as Yiddish speakers, so we added the vowel A and converted the K to a C, no doubt to disguise the fact that this word really belongs to another language.

Even though no other source confirms this, it sounds quite plausible, since the meaning is exactly alike to German 'knuddeln' but the insertion of the vowel makes a direct borrowing unlikely, whereas Yiddish tended to be just phonetically imitated in colloquial language.

15
Can the verb "wonder" simply take an object?
4
Etymology and meaning of the word "snog"

11
Origin of the word "spraunce"
10
Why is a black eye called a "shiner"?
8
Etymology of 'Pizzazz'
3
difference between apt and fit
3
What is the etymology of "squiffy"?
26
Eww! Has it crossed the pond yet?
3
origin of "chuck" (as in throw and/or throw away)
16
"newfangled", "fandangle" and "fandango"
9
Why is the origin of “threshold” uncertain?
6
How and when did "jug" come to be a slang term for "prison"?