Is it correct to say “I kindly request you to…”?

Isn't kindness already implied when you say "I request you to..."?

When I say "I humbly request you to...", the word humbly helps me to label the state of my behavior during the request.

On the other hand, what value does the word kindly add to the request?

Grammatically speaking, no, it is not correct, because in the language I grew up speaking — Twentieth Century American English of the Inland North variety of southern Wisconsin — you cannot write:

Or much more likely:

Because request is one of those verbs that wants the other kind of construct, the one with that and a clause, not the one with a to-infinitive the way ask is. These are not always interchangeable; it depends on the verb that governs them.

Note that you can request NPs just fine; it is VPs where you must be careful.

In my language, ask and request are different in what they accept as a complement. You cannot “request” someone “to” do anything; you can only ask them to do it.

See how that works?

While this restriction is not something universally applied by people long ago and far away, the ungrammaticality within the lect of standard American English as described above remains. The other form sounds foreign, as from a non-native learner of English who learned it from someone who didn't know English very well, or perhaps from reading dusty old books from authors several centuries dead.

What you won’t be able to do “prove” that something is “correct” or that it “not incorrect”. All you can do is document use and non-use, acceptability and unacceptability.

No one I grew up with, whether friends or family or colleagues, ever puts things together like this. It sounds “funny” to me, something I could not say and cannot say. That’s why it’s ungrammatical to me.

Here’s some supporting documentation for that use and non-use, courtesy of Google Ngrams:

As you see, the request you to style peaked in 1830 and has dwindled to nearly nothing since then. By the time something gets that rare, it’s bound to seem ungrammatical to people hearing or reading it, since they virtually never do so.

The UK version shows the same general trend, but with differing final results: 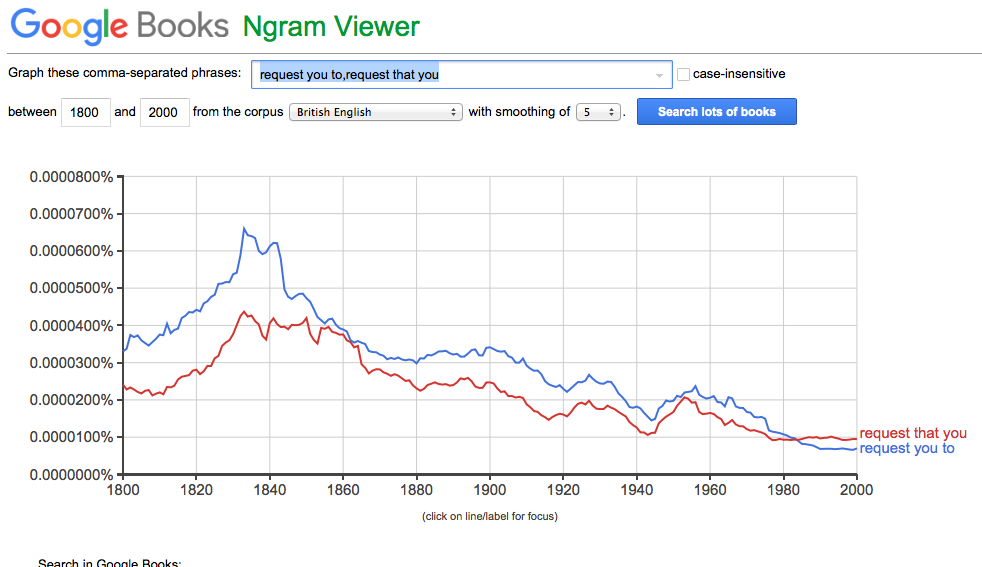 The fancy formal "subjunctive" version has not outpaced the older version in UK usage the way it has in American use. This may be because UK use of the "mandative subjunctive" (also known as the uninflected bare infinitive or the "modally marked" form) is quite a bit less common than the US use of that type of construction.

As for politeness, we don’t really do much in the way of etiquette questions here. However, things like

are all frequently seen in formal invitations and such. They are in the “expected” format. As with all language of courtesy, you should not get too worked up over what each word literally means in these frozen, fossilized forms. They have become formulaic, so it is “what people do” on such occasions.

Note that another old formula:

is something different; it is in fact a demand, and sometimes a command.

One of the OED’s definitions of kindly is ‘With natural affection, affectionately, lovingly; with sympathy, benevolence, or good nature.’ There is nothing at all wrong either grammatically or socially in making a request in such a civilised manner.

•*I request you to do something.

Something hotly debated by tchrist, FumbleFingers, RegDwight and others above.

I agree with tchrist, this is not an acceptable grammatical form.

The reason for this, I think, is because request is not a catenative verb, i.e., it can't be followed with an infinitive (even separated by the pronoun "you") unless it is in the passive form. So while RegDwight above is correct in saying that

"The letter requested him to report to London immediately."

is correct, it would not be correct to say:

"The letter requests you to report to London immediately".

The first iteration (from OED) is only correct because request appears in a passive construction.

As reference, I provide: http://en.wiktionary.org/wiki/Appendix:English_catenative_verbs

for me the sentwence is wrong. It is not the same to humbly request than to kindly request... what has kindness to do with it?

There are two issues here: the grammaticality of the construction 'request someone to do something' and the appropriacy of the adverb 'kindly' in this context. As to the first question, the New Oxford Dictionary of English (1998) has as one of its examples for the use of 'request':

The letter requested him to report to London immediately.

So that is strong support for the grammaticality of the expression. As to the use of 'kindly', this seems to revolve around who is supposed to be 'kind'. In this phrase it is the speaker ('I kindly...') whereas one would think that the intention is to request the kindness of the hearer as in 'Would you kindly...?' So it seems odd and is possibly a case of transferrence. Personally I would never recommend saying 'I kindly....' at all since kindness is a quality that others should impute to you, not you to yourself. 'I humbly/respectfully/earnestly...' seem more appropriate to me.

Not the answer you're looking for? Browse other questions tagged adverbs politeness or ask your own question.

7
Which preposition should be used after the verb “request”?
5
“to require someone to do something” vs “to require that someone do something”
2
Is the phrase 'request you to send the copy' correct?
1
Do I use “be” or “is” in this sentence?
0
What kinds of verbal complement does the verb “request” accept and require?
1
“kindly request that something IS cancelled”, or “WILL BE cancelled?”
0
Is “I’m writing to request the username ‘log’ be released.” correct?
1
A question about “be”
14
I would like to kindly ask you could you check…?
10
What's the deal with “thank you kindly”?
see more linked questions…