History and usage of "dooryard"

I have been interested in the expression "dooryard stop" recently. This is an expression that is used to describe a short visit in someone's dooryard (driveway) that often means not staying long enough to even get out of the car. It is the opposite of what could be called conversational dieseling.

I have used it all my life, and only recently learned that it is native to Maine (my home state), and pretty much no one else has ever heard of it. I find this peculiar.

My first thought was that dooryard was a hold over from our English roots, but the Free Dictionary indicates that it is "US and Canadian" usage. (I suppose if you overlap the US and Canada, you get Maine.) Indeed, Urban Dictionary describes is usage as limited to Aroostook County, the northernmost part of Maine along the Quebec border.

Merriam-Webster puts its first recorded use around 1764 and draws the parallel with barnyard and backyard, and describes it as the yard in front of the door of the house. I believe that nowadays, Mainers would tell you it means the same thing as driveway, which makes sense given that the driveway usually runs beside the kitchen door of the houses here, which would be the entrance for informal guests.

Can anyone tell me more about the history of this word, and does anyone know about the actual extent of its usage? I have a hard time believing such a simply formed word is restricted to such a small population.

OED 1 defines it as “U.S. A yard or garden-patch about the door of a house” and offers the following citations:

I note that all of these except the Eliot are from Yankee sources; and although Eliot was born and raised in St. Louis, his parents were New Englanders.

However, probably the most famous use of the word is Walt Whitman’s elegy on Lincoln, When Lilacs Last in the the Door-yard Bloom’d—and Whitman lived his whole life on Long Island and in Camden, New Jersey, except for a brief period during and immediately after the Civil War.

EDIT:
A posting on rootweb.com, Some Old Houses in Readfield, Maine, describes the evolution of Maine architecture and provides detail about the origin of “door yard call”:

Over time [...] men could find time to make additions and improvements to the log cabins — sometimes the original cabin became an outbuilding, and a finer house was built. Sometimes the original cabin was enveloped, and a century later the unsuspecting eye would never have guessed that a log cabin was nestled inside a lovely Victorian structure. In the mid 19th century it became common in Maine to build a summer kitchen, shed and barn onto the house (usually a cape cod style house) creating a “big house, little house, back house, barn” effect. This architectural style caught on about the time of the mass exodus west, and at the beginning of the agricultural decline in Maine, thus our extended farm buildings are rarely seen in the rest of the USA. The disadvantage was, of course, threat of fire which would destroy the whole farm, and the smells and flies that went with an attached barn. Some of the advantages were easy accessibility to the barn, animals, food storage areas, milk room and sleigh in the winter; protection from the winter winds both outside and in, added warmth for the animals; and last but not least an indoor trek to the privy at the back of the barn or shed. If you mention a door yard in another part of the country chances are they will not know what you are referring to. With the extended farm buildings there were three yards: the front yard by the parlor where special guests were greeted, the barn yard where the men did their farm chores, and the door yard by the shed or summer kitchen where women did laundry, planted and tended their kitchen garden and did other woman's work. Sometimes we still hear the term “door yard call”, and now you know the origin — you wouldn't want to disturb someone for any length of time while they were working so you just stop for a moment on your way by for a quick hello in the yard — you made a “door yard call” .

Your dooryard stop sounds a bit like a whistle stop to me. I do not have at my fingertips the Dictionary of American Regional English, but that is the go-to place for studying such regional usage, particularly where the same thing goes by different terms all over. The entirety of the OED2’s entry for the word is as follows:

ˈdoor-yard. U.S. A yard or garden-patch about the door of a house.

Pity about the first citation and being forbidden to wear any hats resulting from this question if you are a Freshwoman. :)

EDIT: I found a wee bit of the aforementioned DARE online here, where it mentions these in the section on New England:

The Chronicling America newspaper archives covers 1836 - 1922. The earliest 500 results for dooryard (removing duplicates) are found between 1836 and 1875 and are from these states: 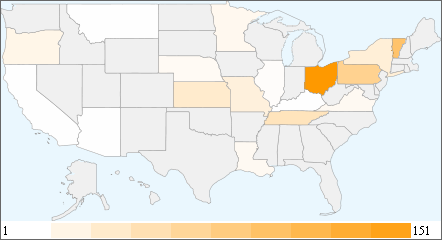 Many years ago, when I was working at Wave Hill, a New York cultural property consisting of several acres, gardens and two manor houses, we referred to the walled in courtyard outside the kitchen of Glyndor House as the "dooryard." It was just off the driveway, and clearly would serve for an informal visit -- not necessarily in the dooryard, but by way of the dooryard and into the kitchen. That's the way friends, especially women friends would stop by. It was used for laundry, cooking and gardening, as mentioned above. Because it was walled in it was safe from marauding deer and icy winds off the river. The walls would also trap heat from the sun, making it more of an all-year feature. When I was growing up in Minnesota, no one except the pastor ever came to call by the front door. The family and friends -- even bums and traveling missionaries, all came to the kitchen door. If only we'd had a dooryard instead of a box elder tree.

Your neighbours in New Brunswick also use the term "dooryard".

dooryard \'dor-yard\ n - The exterior area of a home surrounding the most commonly used entryway, typically the driveway area; "Buddy does a good job of plowin' out th' dooryard." A logical extension of "barnyard," "back yard" and "front yard," it is likely that this compound word grew out of a necessity to distinguish working areas from living areas. In a practice common to the region, homes were attached to barns and other out-buildings; dooryard identifies the exterior area of a home not given over to farming. A household word in the County, dooryard is seldom heard elsewhere.

I'm sure a lot of the terms in that Carleton County dictionary will be familiar to a Mainer, might be interesting to know which are cross-border words/usages and which are uniquely Canadian.

Always, When Lilacs Last in the Dooryard Bloom'd summoned up a familiar image of a tiny yard (front or back) of an urban row house in an old city like Washington, D.C.

I live in Washington, D.C. and it's now late April. The lilacs in my door yard are in full bloom, as they must have been when Whitman began work on that poem. Whitman spent the Civil War years living in Washington. For me, thanks for Whitman's poem, as for Whitman, the lilacs' bloom always brings to mind that tragic month in our history.

But I grew up on Long Island. I played football and ran track meets as a visitor at Walt Whitman High School in South Huntington. My guess is that I had run across "dooryard" as a child on Long Island. Maybe Whitman did as well.

I found this site because I’m reading EGGS IN THE COFFEE, SHEEP IN THE CORN: My 17 Years as a Farmwife by Marjorie Myers Douglas (1994). She moved to her in-laws’ farm in western Minnesota in 1943 after growing up a city-girl in Minneapolis and a two-year career as a social worker in New York City.

To do our laundry, Mother Douglas and I carried water from the pump, which stood across the dooryard and the driveway, between the stock tank and the garden.

I was curious about a more precise definition of dooryard. It seems that this was common terminology for her life on the farm. Unlike the information from Maine, it seems that in western Minnesota, dooryard and driveway do not coincide.

"The earliest citrus in Texas was from seed planted in dooryards by the early settlers (Mortensen, 1983)."

The planting is referring to earlier in the paragraph, describing trees that, "were imported from Japan (1908-1911) and planted throughout the lower Gulf Coast states from the northern Florida Gulf coast to Texas."

Not sure who "Mortensen, Ernest" is, or if he or whichever author interviewed him was interposing an Northeast vocabulary, but could it have a Southeast usage? In any case, let's bring "dooryard" back!

I grew up hearing this word from my parents. I had no idea it was uncommon until my husband asked me what I meant. It was always used to mean the area encompassing the driveway and sideyard. My family moved to mid-Wisconsin from Germany a hundred years ago and I have no clue where they picked up this word.

I'm doing research on snakebite from the Eastern Massasauga rattlesnake and have over 1,000 reports from newspapers from digitized databases. I have wondered about the term "door yard" myself. I have 10 reports from Michigan that use that term from 1869 to 1915. I have 3 reports from Indiana from 1873 to 1914. I do not have any for Illinois or Ohio. I thought it might be like the area by the side door/driveway. One account talks about feeding chickens in the door yard. Then again, reports talk about front yards and back yards. These reports are the only place I have seen this term "door yard" used.

I lived in El Dorado County, California, south of Placerville. The local firehouse of CalFire (earlier "CDF," or "California Department of Forestry and Fire Protection") would issue annual permits of approval for "Dooryard Burning," valid up until about Memorial Day, ostensibly to burn wood taken down (or windfallen) from your own property. I had not encountered that term before obtaining my first permit in about the year 2000.

Not the answer you're looking for? Browse other questions tagged etymology usage history dialects or ask your own question.

64
Is there an English phrase for an inability to actually *leave* already?

0
"Baby is creeping" vs. "baby is crawling" in AmE
12
Why is it "have someone wrapped around your LITTLE finger"?
3
The history of 'aisle' and 'isle'
3
What is a "spring lobster?"
1
History and English demonyms
18
-sen for -self in English: history and usage
2
Earliest usages of the literal and figurative sense of “window dressing”
8
What influenced people to start using "I'm good" in answer to "How are you?" and in other contexts?