Difference in the implied meaning when different words for “Shining” used?

Please consider the sentences below:

Below are the definitions given by my dictionary.

I know that even if two words are synonyms, they can imply different meanings, even when the dictionary definitions look almost identical (as they do here). Are there any such differences between the implied meanings of the example sentences above?

There's not much of a difference between any of the words in that sentence, and indeed they are all very similar in general. If I were to assign shades of meaning to them, I'd probably break it down like this, more or less in decreasing order of brightness/eye-catchingness:

Glint: a single twinkle or sparkle.

In regard to your example sentence, I'd say "glittered" is probably the most fitting since there is a lot of grass and a lot of individual dew drops, each of which can catch the light and cause a twinkle, so the overall effect would be a lot of small, rapid twinkles.

I prefer your second sentence. Simply change the word "glistening" to "glistened".

--The grass glistened with dew.

I like the first two words (glistening & glittering), as well as tchrist's shining.

Glittering might be especially apt if the dew was causing several individual points of light, as if glitter had been spread across the lawn.

I'm not so fond of glinting, perhaps because I often associate it with someone's eyes. NOAD lists this definition:

• (of a person's eyes) shine with a particular emotion : his eyes glinted angrily.

That said, the word's primary meaning is "give out or reflect small flashes of light," so it could be used in the dewy grass sentence.

Similarly, there's nothing wrong with gleam per se, but NOAD lists these definitions:

• (of a smooth surface or object) reflect light because well polished : Victor buffed the glass until it gleamed | [as adj] (gleaming) sleek and gleaming black limousines.
• (of an emotion or quality) appear or be expressed through the brightness of someone's eyes or expression : a hint of mischief gleaming in her eyes.

Since grass is not well-polished, and there are also more ties to eyes and emotions, I'd steer away from gleam as well.

As a general rule, it's worth examining secondary and tertiary definitions of words when trying to learn about how synonyms differ. Those additional meanings will sometimes – though not always – hold the keys to understanding why some words may sound a bit more out of place than others in certain contexts.

As for Martha's comments about pictures being worth a thousand words, that's another technique you can use. For example, I found these pictures using the Google image search: 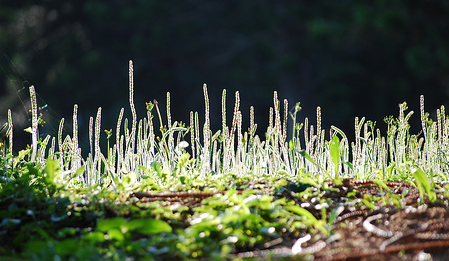 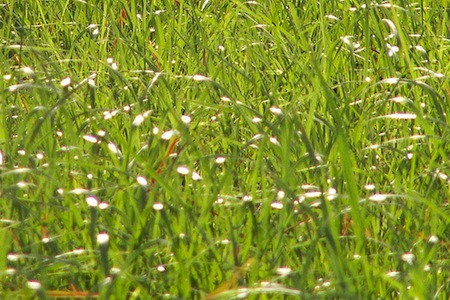 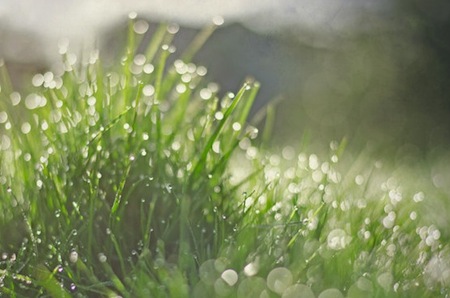 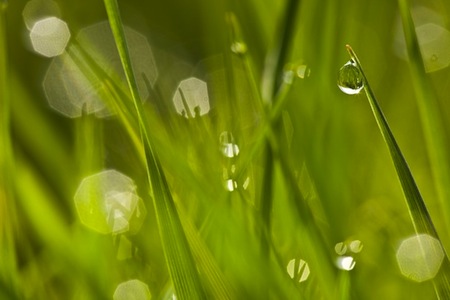 I found these four images by typing (from top to bottom): "gleaming grass", "glinting grass", "glistening grass", and "glittering grass" into the Google image search bar. As you can see, the terms are largely interchangeable in this context. In fact, one of the pictures was captioned "magical atmosphere of the glittering and gleaming carpet in the grass," as if one adjective wasn't entirely sufficient.

3
What is the word for the reflected sun light?
7
Is There a Word for the Spot on the Floor at the end of a Sunbeam?