While waiting for the kettle to boil this morning, I was idling and reading the label on the bottle of milk and was struck by the declaration: "Permeate free, made in WA". Here's a shot of the label for proper context: 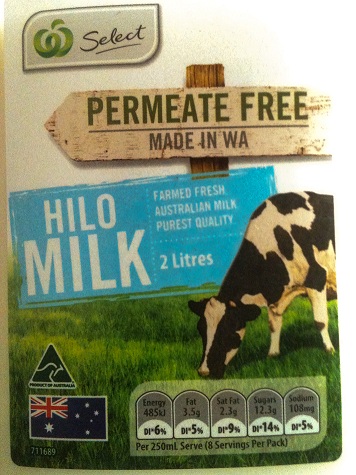 It's clear that they want to state that the milk is produced in this state, but it sounds odd to me to say that milk is made — I've always associated that with products that require at least a nominal amount of manufacturing/processing (e.g. butter, cream, yoghurt).

For the raw produce though, I can't really recall anything using made but more specific terms like grown, harvested, farmed, raised, etc.

So in this context, does anyone has a suggestion what might be a more descriptive, or more appropriate word? The best I can come up with is milked but that sounds awfully clumsy.

Alternatively, if people have milk bottles from their side of the world that say something similar, then it could just be me that thinks it's a bit clunky.

Dictionary.com says that milk is "liquid produced by mammals". Perhaps produced would be better. Cows "make" milk and they "produce" milk, and both sound normal and natural and idiomatic to me (American-speaker): either word should work. The problem for me with this advert is the meaning of "Permeate Free". What a strange name for milk!

I've seen labels like "Product of", "Produce of" being used on food labels and I think that it may be more apt in this case.

I think that the alternatives to made, produced, and the OP's milked in the context of milk production are:

All three terms appear to be used. "Drawn in WA" sounds fine to mine ears. "Draughted in [WA]" might also work; but it's technically a term from the beer industry with slightly different connotations.

Not the answer you're looking for? Browse other questions tagged single-word-requests verbs synonyms past-participles or ask your own question.

9
Is there a word better than “exotic” to describe languages that are little known and little studied but have many speakers?
2
What is a term that means “to force into a particular form”?
4
Better term than “off label” to describe something used other than as stated
0
Word/phrase that can be used to say that a particular word doesn't describe something
23
Name that fallacy: If it's more expensive it must be better
10
What is a less offensive term for “Christian mythology” that still implies it's non-empirical?
2
Is there a better term than “dummy” to describe a non-functional part of a program?
0
Term for a complaint made about somebody present that not everyone knows refers to this person
0
What is the term that describes a noun being used to represent it's use?