The words "nineteen-hundreds" to me mean strictly 1900–1909. I've noticed several times that people, invariably North American, use these words to mean "the twentieth century", or 1900–1999, or something like that. Similarly for "the eighteen hundreds" used to mean "the nineteenth century" and so on.

Is this an example of a misuse of words by people who have heard and then misunderstood them, or is this actually an established usage in America? Secondly, if it is not a misuse, how would said Americans refer to the period of 1900–1909?

If you do a corpus query (COCA) you'll find that 1900s is almost always preceded by early. (121 times out of 149 hits). This qualification leads me to think that most authors think that the 1900s is a large time frame, that benefits from further qualification. Furthermore, in many cases the context shows that "early 1900s" refers to years outside of 1900–1909.

I think of any "hundreds" term as representing the entire century and depending on the specificity demanded in the situation use "early nineteen hundreds" or "late nineteen hundreds" to reference a period. When referring to the first decade of the twentieth century I might say "the nineteen aughts," perhaps a little pretentious , but I like the sound of it.

It's worth noting, though, that I rarely hear "nineteen hundreds" used to refer to anything later than the earliest portion of the century, perhaps because it's so recent and most people can still remember portions of the latter decades. I hear "eighteen hundreds" much more commonly used to refer to that entire century.

As to how to refer to that particular period... what about nineteen-ohs? Like "twenties, tens, ohs..."

In the US at least, there's enough variation in the use of this term as to render it imprecise to the point of being useless.

There appears to be an astonishing lack of references as to which period the 1900s refer to.

is also referred to as the 1900s by Wikipedia

Although this expression is commonly used to cover the first decade, I could find no authoritative source that actually defined the precise length of time or precluded the years 1910 to 1918.

Below is an Ngram chart plotting the frequency of usage of the following terms: “1900s”, “early 1900s” and “early 20th century”. The term 1900s dominates its two rivals from the start. Interestingly, it appears to have enjoyed a sharp rise around 1978 while reaching a peak in 1984. This might have been influenced by George Orwell's dystopian novel Nineteen Eighty-Four, or be just coincidence. Despite its sudden drop, the term 1900s picked up and enjoyed a continuous surge until the year 2000. 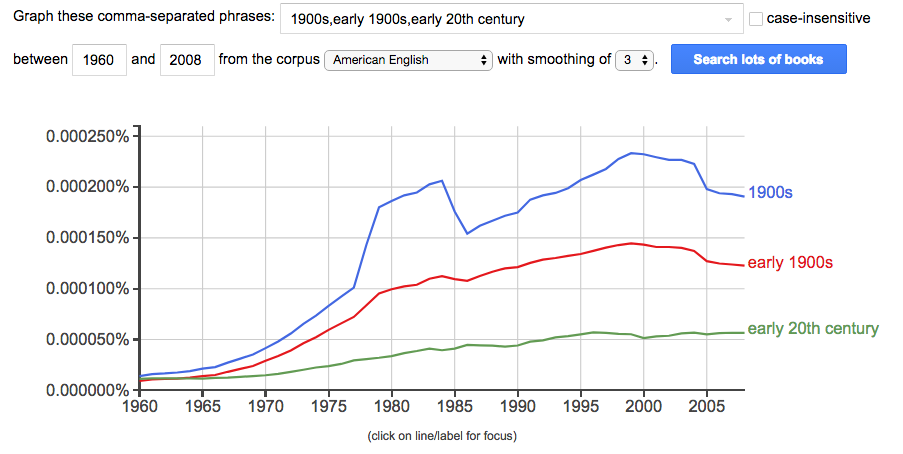 At least here in America it is clear to me that "the twelve hundreds" means 1200 to 1299. And similarly up to the 1800s. If "the nineteen hundreds" is not clearly used in this way yet, it probably will be in the far future. Similarly, I guess it is becoming more common to hear "the turn of the century" to mean the years around 2000 rather than 1900.

If you want to know what the shortened name should be, the least ambiguous one I've come across is "aught" (second defn.) so 1905 would become "nineteen aught five". The phrasing is not very common, but it is correct. If the 30s are "thirties", 20s are "twenties", and "10s" are "teens", then the "00s" are "aughts". Both the last groups are fairly uncommon, however, probably because of the awkwardness of saying "nineteen teens" or "twenty aughts".

There seems to be continuing confusion about the use of the term 1900s, and an increasing tendency even among people who are well-read to use it to refer (approximately) to the 20th century. I would suggest that both terms be dropped to avoid confusion, and the term "the nineteen somethings" should be used officially to describe this period.

It was perfectly simple and logical until Americans screwed it up.

The CENTURY begining nineteen hundred is called the TWENTIETH CENTURY.

It's not 'Two thousands', it's Twenty Hundreds.

Because why? You can't start on a zero.

18
Is it proper grammar to refer to four digit number in hundreds?
1
To which year does “last August” refer?