In words such as salad /sæləd/, you have a VCV pattern (vowel-consonant-vowel), in which the first vowel is short. The syllable division of such words is generally done after the consonant, i.e, as VC-V. Here are a few examples:

This division is in agreement with the notion that generally, a short vowel do not end a syllable.

I would like to ask why there is such a disagreement between the dictionaries, and which division is natural for you. You may want to mention whether your English is American, British or other.

Syllable division in English is very complicated, and almost none of the dictionaries do it right. At least, according to John Wells, one of the experts on the subject (I assume he believes his own dictionary, the Longman Pronunciation Dictionary, gets it correct. See also this blog entry of his.)

Since you ask about personal use:

It would not surprise me to find that it is just such conflicting uses which leads to the disagreement between dictionaries.

I am undercertain whether you asking about syllables, or about hyphenation, or both, but as far as hyphenation is concerned, the standard Knuth–Liang hyphenation algorithm (used not only by TeX but by many other pieces of software) says that one should hyphenate those four words this way:

Yes, that’s right: they say you should not hyphenate lemon at all. On the other hand, Bringhurst’s first rule of hyphenation, located on page 42 of version 3.2 of The Elements of Typographic Style, says that:

2.4.1   At hyphenated line-ends, leave at least two characters behind and take at least three forward.

Fi-nally is conventionally acceptable line-end hyphenation, but final-ly is not, because it takes too little of the word forward.

Therefore according to Bringhurst, only bal-ance is acceptable from your initial set, since it is the only one that carries at least three letters forward.

How hyphenation aligns with perceived syllabication, however, is a more complex matter.

Does it really matter? I think that, whether or I say nev·ər, or ne·vər, once it's put together and spoken as a two-syllable word, it's going to come out as the same nevər, irrespective of where I might divide the word – if I can even discern where the syllables might happen to be separated, and that might not be so easy to figure out. Truth be told, it's something I don't think about, it's something I would have trouble determining, and it doesn't effect how I pronounce words like these.

The only time I've ever been concerned about the proper division of such words has been when I've needed to hyphenate one. Then, I've simply consulted a dictionary.

If different dictionaries show different breaks, then I suppose you could hyphenate the word in either place.

M-W's online dictionary entry for lemon is interesting, in that it shows the word broken into syllables between the m and o, yet its pronunciation guide shows a break between the e and m: 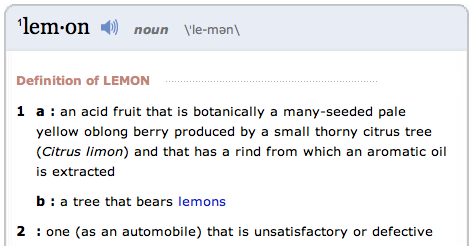 It's hard to tell if that's intentional (and, if so, what that means), or if that's just evidence that M-W is a lemon of a dictionary. For what it's worth, HM's American Heritage is more consistent in this matter:

Not the answer you're looking for? Browse other questions tagged pronunciation orthography dictionaries phonology syllables or ask your own question.

32
How many syllables are in the word 'hour'?

4
Why does the letter "a" correspond to /ɪ/ in words like "image", "private" and "surface" (American English)?
10
What source explains the different pronunciations of "hol" in "alcohol" and "hollow"?
1
Could you clarify this "Intervocalic Consonant" theory: "consonants are syllabified with the more strongly stressed of two flanking syllables."?
6
Why do we pronounce a long second vowel in "decide", but a short second vowel in "decision"?
2
'Histogramed' or 'histogrammed'?
1
Why is the L silent in "walk" but not in "bulk"?
1
How to syllabify "very" or "merry" etc in British English?
3
“One syllable” words ending in -re