Origin of "More X than you can shake a stick at"

What is the origin of the phrase "more X than you can shake a stick at"?

Every website I've seen on this basically says the same thing (e.g., http://www.worldwidewords.org/qa/qa-sha2.htm):

Does this community have any ideas (and support for those ideas)? Also, is this solely American? Solely North American?

"More X than you can shake a stick at" means more than you can count. I don't know the origin but a as a wild speculation picture someone using a walking stick or cane to count something. If there's lots to count, the stick will be shaking a lot for each item. If there's too much, the shaking stick won't be able to keep up.

The OED says it's a figurative use of shake but doesn't give any more on the origin other than saying it's colloquial, originally and chiefly U.S., and giving the same 1818 as in the question.

It's originally North American, but it is now commonly used and understood in the UK as well.

I found an earlier example from 1794, but without the comparative "more X than...". British Synonymy: or, An Attempt at Regulating the Choice of Words in Familiar Conversation, Volume 2 by Hester Lynch Piozzi: 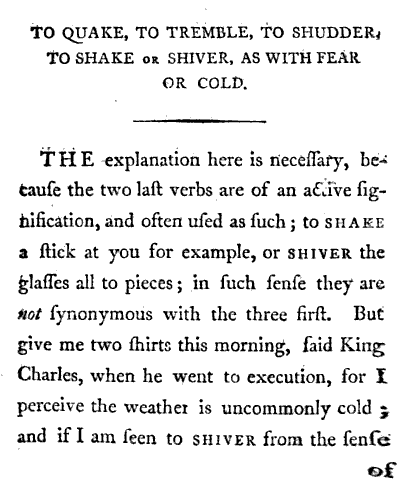 THE explanation here is necessary, because the two last verbs are of an active signification, and often used as such ; to shake a stick at you for example, or shiver the glasses all to pieces ; in such sense they are not synonymous with the three first.

But this is British and the full phrase appears to be American, so they may be unconnected.

World Wide Words is usually a good source on these things. If they summarise: "nobody knows for sure", then that's probably the best we have.

However, there is this from alt.english.usage FAQ that questions whether the original meaning was different to today's:

This 19th-century Americanism now means "an abundance"; but its original meaning is unclear. Suggestions have included "more than one can count" (OED, AHD3), "more than one can threaten" (Charles Earle Funk), and "more than one can believe" (Dictionary of American English). No one of these seems easy to reconcile with all the following citations: "We have in Lancaster as many taverns as you can shake a stick at." (1818) "This was a temperance house, and there was nothing to treat a friend to that was worth shaking a stick at." (David Crockett, "Tour to the North and Down East", 1835) "Our queen snake was [...] retiring, attended by more of her subjects than we even dared to shake a stick at." (1843) "I have never sot eyes on anything that could shake a stick at that." (= "set eyes on anything that could compare with that", 1843) "[...] Uncle Sam [...] has more acres than you can throw a stick at." (1851) "She got onto the whappiest, biggest, rustiest yaller moccasin that ever you shuck er stick at." (1851)

A connection with the British expression "hold (the) sticks with", meaning "compete on equal terms with" and attested since 1817, is not impossible.

OED staff told me: "The US usages in DAE do appear to have a different sense to that given in OED. [...] All the modern examples I've found on our databases conform to OED's definition so I think this is still the most common usage."

Merriam-Webster staff opined that the "count" interpretation "works as well for 'as many as you can shake a stick at' [...] if you take it to mean that there is no limit to how many of the objects in question one could shake one's stick at. [...] We would consider 'A can't shake a stick at B' a different expression entirely, with a meaning similar to 'A can't hold a candle to B' [...]."

In their 1897 work "A Dictionary of Slang, Jargon & Cant", Albert Barrere and Charles Leland suggested that Dutch immigrants originated the expression using the Dutch word "schok" = "to shake or hit."

Some early quotes that might shed a little bit of light.

These have time adverbials following, something which is not seen in later quotations. My best guess is that shake a stick at was a way of saying "count with a stick." This meaning could conceivably be related to shake a stick at meaning "to threaten with a stick," which is attested at least as far back as the 1700's.

I tell ye -- cute as nutmeg -- brought up on ten-penny nails, pynted at both eends; why that air hat o' his'n' t you see there, with a new hat-case, bran fire new, see how he keeps muchin' it -- whenever you look that way; why that's nothin' after all but an old three quarter dollar swap, with the wool off, an' more spots on the brim than you could try out in half a year -- No! As true as you're alive -- or shake a stick at between now an' everlastin'

One harvests bushes full of berries with a stick, by shaking or thrashing the berry bushes with a stick. I believe it implies abundance. One doesn't shake a bush with only a few berries with a stick, one simply picks them individually. My guess is that this method of harvesting an abundant crop is the origin of the term. More than one could harvest.

My assumption would be it comes from herding and protection of the animals from predators. A shepherd might shake a stick at one predator, but there may be times when there are too many to shake a stick at (making your efforts futile).

Hugo's response, with the excerpt from British Synonymy, may hold a clue. In the late 1700s and early 1800s, "to shake a stick at," was commonly used in descriptions of fights with walking sticks, or canes. "To shake one's stick at" someone (literally) was to threaten them with one's stick or cane. There is not perfect proof that this was the origin, but several examples of literally "shaking a stick" from the 1810s and 1820s may explain the allusion. There are several examples of people trying to threaten, coerce, or control a number of people, or dogs, by "shaking a stick" at them. It seems that if there were too many people to handle, that it would be "too many to shake a stick at."

"[An old boarding-school schoolmaster] has been mentioned as possessing an influence over the manners and conduct of the inhabitants almost unbounded. . . . “If he shook his stick at the Hall Green, (the place of his residence,) the boys trembled as far as the town land end” (distant half a mile)."

"As Young Francis was walking through a village with his tutor, they were annoyed by two or three cur dogs, that came running after them . . . . Francis every now and then stopped and shook his stick at them, or stooped down to pick up a stone . . . ."

Many more examples can be seen here: http://esnpc.blogspot.com/2016/03/sticks-and-canes-may-break-my-bones.html

It's possible, at least; it is a reasonable explanation based on actual, contemporary usage of "shake a stick" at the same time that the idiom first appeared.

This is purely conjecture - I can find no hard evidence for it.

In England I grew up with a similar, though more specific phrase:

More than you can shake a shitty stick at.

This, I believe (though I cannot substantiate it) comes from the practice of spreading manure over a small field using a stick (typically blackthorn) by throwing it from the end. In the local Somerset dialect the phrase, I believe, was more akin to:

More'n you can shuck yer shitty stick at

Where shuck is to cast off or throw away.

Obviously, if you have too many acres of land to manure it rapidly becomes impractical to do it all with a stick like that - hence more than you can suck your shitty stick at, or shake your shitty stick at as it has become corrupted to over the centuries.

The only reference I have found to date is the lyrics of a Wurzel's song (old Somerset band) "Champion Dung Spreader":

Just leave our old man where the dung lies piled up thick,

And he'll make it fly for miles with 'is girt big blackthorn stick!

I believe it comes from prospecting, or some form of mining. One goldminer says to the other,"I got me more gold over here than you can shake you're silly stick at!". That's my guess, at least. The stick, of course, being the pickaxe.

This phrase or idea likely predates English, but its English source may have been derived separately.

It is probably from those who used sticks in counting. See counting sticks or tally sticks.

If you are counting more items than your counting stick can manage, there are quite literally more X than you can count or shake your stick at.

Individuals having trouble with counting are easily imagined to actually shake their stick in anger/disappointment/frustration.

Not the answer you're looking for? Browse other questions tagged etymology phrases idioms north-american-english or ask your own question.

39
Origin of the phrase, "There's more than one way to skin a cat."
14
Origin of "the wrong end of the stick"
2
"To Cut Stick" Origin
0
Does "shake his booty" mean "shake his butt"? And does it make it more attractive?
4
Origin of phrase "pulling for you"
2
Origin of "Stick to your knitting"
3
"More than ever" vs. "more than ever before"