Is there a single word (similar to Russian свой for those familiar with Russian) which I could put into this sentence?

By tomorrow, one of us will see the money in __ account.

I would use the singular their for this purpose:

One of us will see the money in their account.

It's useful for purposes besides referring to someone of unspecified gender.

EDIT: Upon further consideration, my modification to Andrew Leach's answer is just as good (and better for people uncomfortable with the singular they in this context).

One of us will see the money in our own account.

To me, our suggests a joint account, but adding own removes that implication, and suggests a single-owner account. Our own can be used for joint ownership, but only if this is implied by the context.

You could use our or his.

Their is now standard for a singular possessive where the sex of the referent is not important, but because you are speaking amongst yourselves about yourselves, use our in much the same way:

By tomorrow, one of us will see the money on our account.

Alternatively, use his as a gender-inclusive pronoun, or her if you both female:

By tomorrow, one of us will see the money on his account.

This is more of a distributive than a reflexive (or reciprocal) pronoun. However, that usually applies each of a plural subject singularly, which together are still many. You want something that picks out just one, and still has grammatical agreement. This is perhaps easier done with rephrasing, but many native speakers will use something involving their or own, or sometimes both.

You will not see an exact English equivalent to Russian свой because it has grammatical agreement with the subject of the sentence no matter what the person is. Or at least, that’s what they say here.

It looks to me like it can not only match any one of the plural subject, it can match each of them separately. If so, that makes it a distributive pronoun, and English doesn’t really have one of those. We tend to add words like own or even respectively, but that doesn’t work everywhere.

English either, which means just one of two (rarely, more) things, normally take singular agreement, which may perhaps be what is troubling you here. One solution is to apply own, like this:

No, it isn’t always a perfect solution, but at least and there may be a bit of ambiguity left, but at least that way you don’t have to switch persons for the account. The own lets you use a plural pronoun but apply it singularly to just one of them.

The referenced Wikipedia article on distributive pronouns neglects to name a much closer language to English than Hebrew has one having such a thing. Spanish has words corresponding to English each (cada), both (ambos), and all (todos), but which applies distributively to just one per. That is sendos, which means one for each of two or more persons or things. It has no exact one-for-one translation into English, no moreso than does your Russian word. (Like the Spanish word for both — ambos — sendos is defective in that it has no corresponding singular. It is inherently plural.)

Normally, both in English is also automatically plural because by default it applies to each together. Sometimes, however, it can apply to each of two things singularly. So sometimes we do use both distributively, as in:

which has the sense of each of them separately receiving a dollar, but talks about them in the plural. That’s because own somewhat distributes to each:

That clearly talks about individual ownership.

However, in your Russian case, that doesn’t quite apply, because it is an exclusive individual, someone this way:

That’s not an altogether uncommon pattern in English, although it may be unsettling to some fussbudgets. It’s certainly a whole lot better than saying any of:

Although that does lead to one possible alternate rephrasing of your original to dodge the issue of which pronoun (well, possessive determiner) in the second part by using a possessive noun instead:

That seems a bit unnatural to me, though. It is perhaps especially odd to use that sort of thing in the first or second persons. That normally is for something away from the speaker, and you just can’t say *in this person’s account for talking about oneself.

I think all you can do is fill the gap with the other’s. As a native speaker, I would probably express the whole thing a little differently, for example:

By tomorrow the money will be credited either to your account or to mine. Either way, one of us will see it on the other’s account.

Conventionally, his, her, or its is used to refer to one where it means one instance of something (as opposed to impersonal one, where the possessive is one's). See Fowler's Modern English Usage on "One" below.

By tomorrow, one of us will see the money on his account.

Use her if both of us are female. 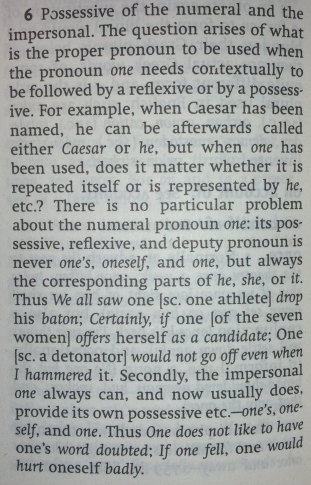 Not the answer you're looking for? Browse other questions tagged single-word-requests pronouns translation or ask your own question.

16
Gender neutral reflexive pronoun — equivalent to “himself” and “herself”
4
Is it typical native speaker usage to inconsistently use the pronoun “one” in a paragraph?
1
Can a sentence begin with an object or reflexive noun?
3
Verb for “make [object] available”
7
What is the English term for “assume the least dangerous body pose when falling”?
0
Single word meaning 'to put to sleep' (best translation of 'endormir' from French)