I understand that the verb awake has two different past participle forms, awoken and awaked. Checking Google Ngram I saw that the former has become more popular than the latter in the last century. I want to know two things:

A Tale of Two Verbs

The answer is fairly complicated at the detail level, but the short story is that there were two different verbs, one strong (call this the alpha version: awake, awoke, and sometimes awoken) and the other weak (call this the beta version: awaken, awakened). Both are formed from the original verb, wake.

So people got to thinking that awaken went to awoken the way awake went to awoke, rather than having awaken stay weak and go awakened. They reanalysed awaken as a strong verb, the way awake had always been. Then they confused them all.

These two verbs have largely converged, but neither form won out over the other, so both enjoy an uneasy coëxistence such that different speakers at different epochs elect different versions, sometimes varying it by situation.

Using had awoken seems to have replaced the alternate strong form, had awoke, around 1929. The weak form was used by Shakespeare, and still dominates the strong form — although somewhat less so over the last 40 years. The archaic had awaked has been completely replaced by had awakened and its alternatives.

In casual and common conversation, I would probably use the phrasal verb to wake up, whether transitively or intransitively, instead of to awaken. Since I am using the wake form, I would use the strong-verb inflexions. I don’t think I use awaken at all.

That means that for “casual” conversation, I would myself use the same form there as I would in formal writing. So with wake up:

But I bet I would switch to the other verb for past or past participle, and so use awoke/awoken. For some reason, at least for me, I find that awoken calls strongly to supplant awakened. I think I just don’t use awaken much.

But that’s just me. These things have changed a bit in the last century or so. In early days, people would write had awoke or had awaked, too. The OED even calls awoken “poetical”, but certainly I do hear it in regular speech. I think the recent awake/awoke/awoken model is nearly as common as the relatively new wake/woke/woken one.

Etymology: In this, as in the simple wake, q.v., two early verbs are mixed up; the form-history being complicated with that of awaken, as the sense-history is with that of awecche.

So it is not the case that awakened is somehow a new corruption of the ancient awoken. Both are ancient. And Shakespeare — a man who never spelled his own name the same way twice in a row — himself used only the weak inflexions.

I believe than in North America today, had awoke would seem “wrong”, as though it used a simple past where a third distinct past participle would be required. This aversion to things like had spoke and had broke may have pushed the had awoken form into a suppletive position over had awoke in careful writing and speech.

However, there is another verb to consider here than just to awake. There is also to awaken.

Etymology: OE. a-wæcn-an, earlier on-wæcn-an, f. a- pref. 2 + wæcnan, to waken. For the form-history, and its complication with that of awake, see the latter. In OE. awæcnan was a str. vb. with pa. t. and pple. awóc, awacen. But sometimes the present stem (being irregular) was mistaken for a weak verb, whence already in 9th c. the pa. awæcnede, mod. awakened, which is now treated as the proper pa. t., while awoke and its accompanying pa. pple. are referred to the originally weak awake. Like awake, this was also at first strictly intrans.; the transitive use is of comparatively recent appearance, but now (in sense 5) the most frequent.

(In early use, rarely in the literal sense of awake; commonly transf. or fig. See senses 2, 3, 5. We still prefer awaken to awake in sense 5. See also the derivatives below, in which the transferred sense is the usual one in modern use.)

Sense 5 of awaken is:

5. transf. and fig. To rouse into activity; to stir up, excite; kindle (desire, anxiety, interest, attention, etc.); in Theol. to arouse to a sense of sin.

Our modern verb wake, waked/woke, waked/woke/woken enjoys — or suffers from — the same historical confusion, and as John Lawler observes, is the original root verb that awake and awaken derive from. It was also originally two different verbs, one strong and the other weak.

The OED entry for wake is even more expansive than on the other two, but it does have one interesting note that is probably relevant here:

The mod. pa. t. woke /wəʊk/ does not regularly represent the OE. wóc, which would have yielded wook /wʊk/. Apparently the mod. woke is a new formation or modification on the analogy of broke, spoke (for the irregularity in the vowel cf. stove pa. t. of stave v.). When this came in is uncertain, for in ME. and prob. in early mod.E. the spelling woke represents the regular phonetic descendant of the OE. wóc. The pa. pple waken has always been rare, and now survives only in dialects in adjectival use. From the 17th c. onwards the forms woke, woken (after broke, broken, spoke, spoken, etc.) have been more or less current for the pa. pple.; woke seems obsolescent, but woken is at least as frequent as waked. No strong forms either of pa. t. or pa. pple. are found in Shaks., the Bible of 1611, or Milton’s verse.

Since we have wake being reanalysed according to the models of broke/broken, spoke/spoken, it makes sense that many writers and speakers by analogy use wake/woke/woken, making it more of a “regular” strong verb fitting in with extant models.

It seems that the formerly heard weak past tense, awaked, fell behind the strong past tense awoke around America’s War of Independence. N-gram 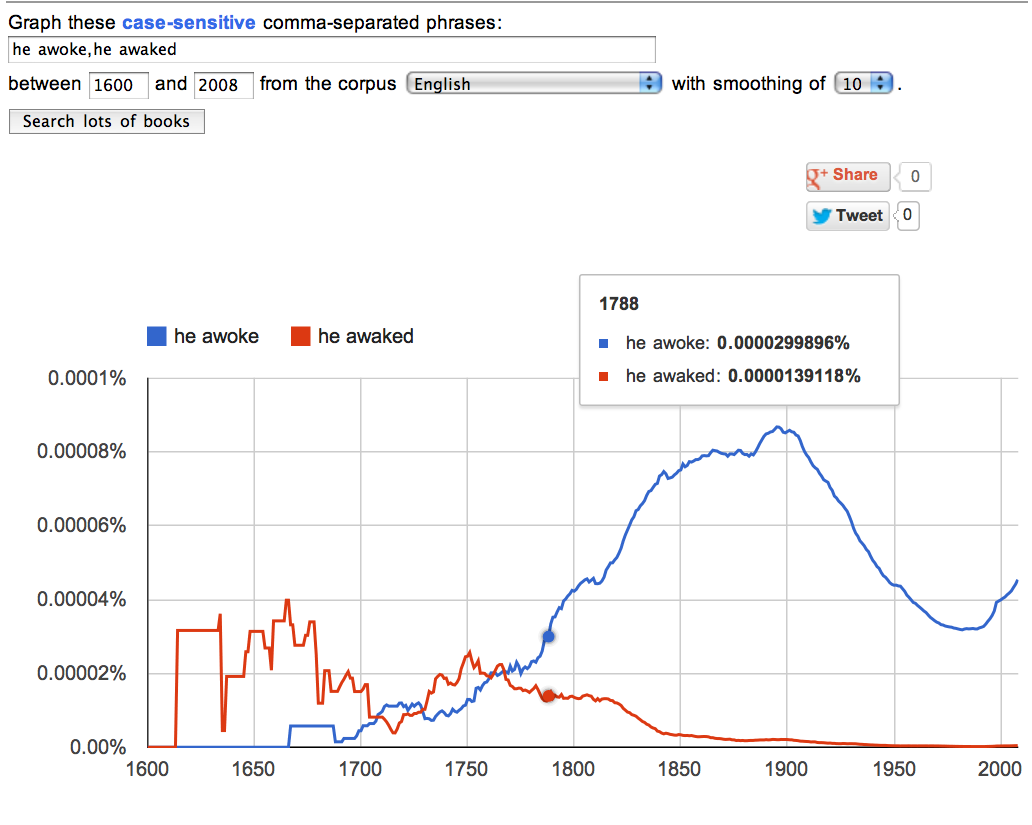 Regarding the past participle, had awoken took around two hundred more years before it really pulled ahead of had awoke by a long shot, although it had been the majority use even before then: N-Gram 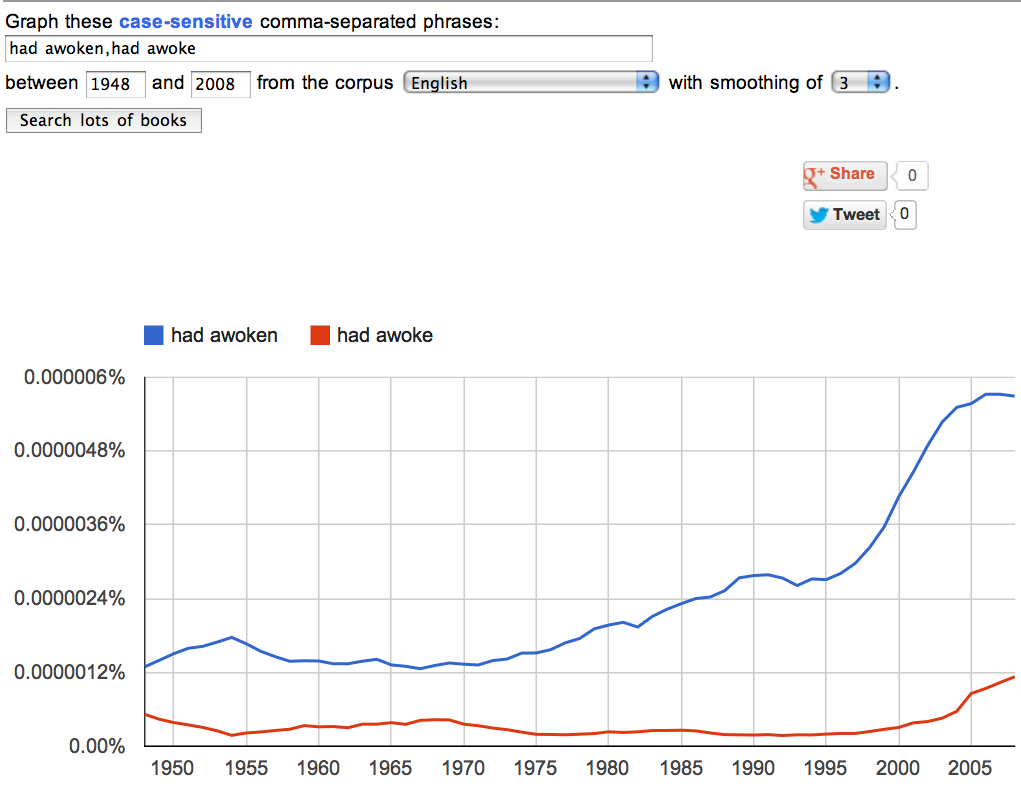 So I do not think you had can any longer call awoken a “poetic” form. It seems to have taken the lead around 1929: N-gram 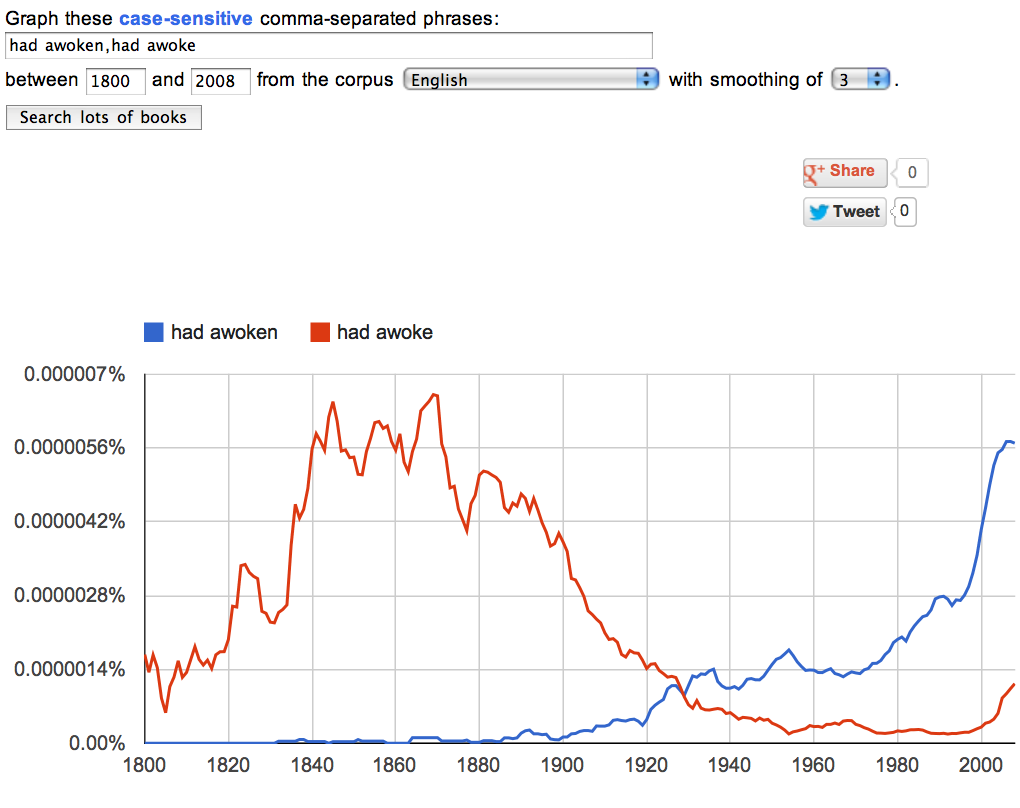 Moreover, there is little difference between the so-called American and British corpora that Google purports to provide: both have just about the same cross-over point for those two.

However, as always with Google N-grams, be careful what you ask about. For example, if we add the weak verb, had awakened, our picture changes quite a bit: N-gram 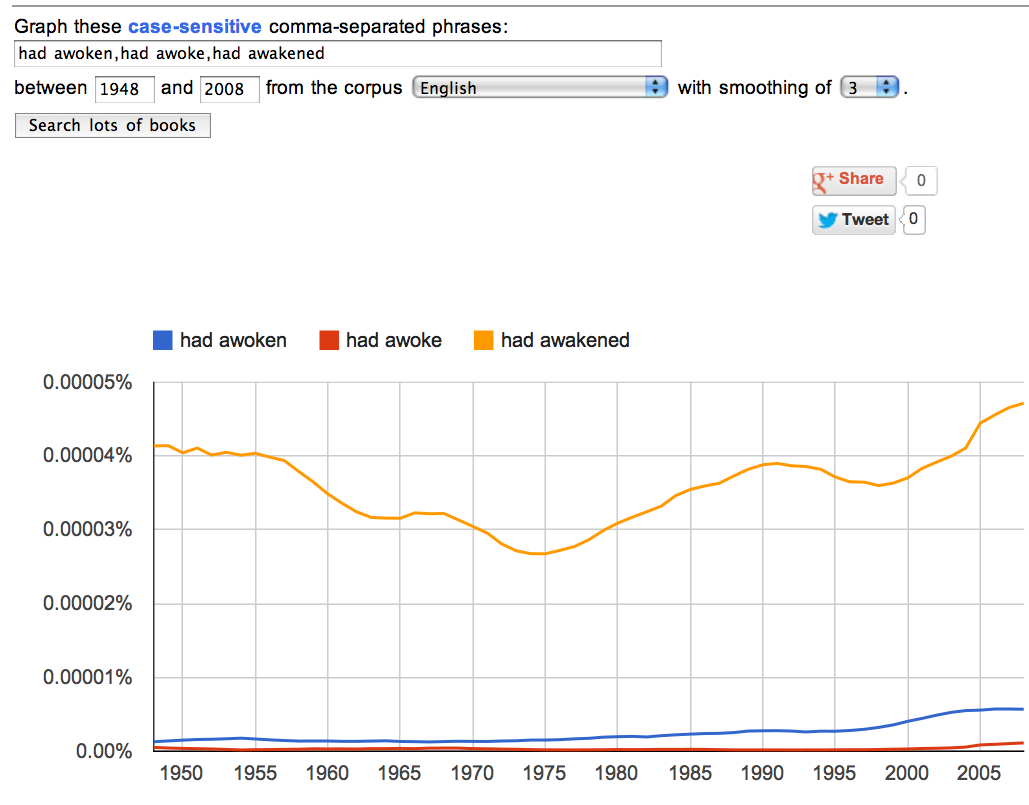 Whereas this n-gram shows the longer picture: 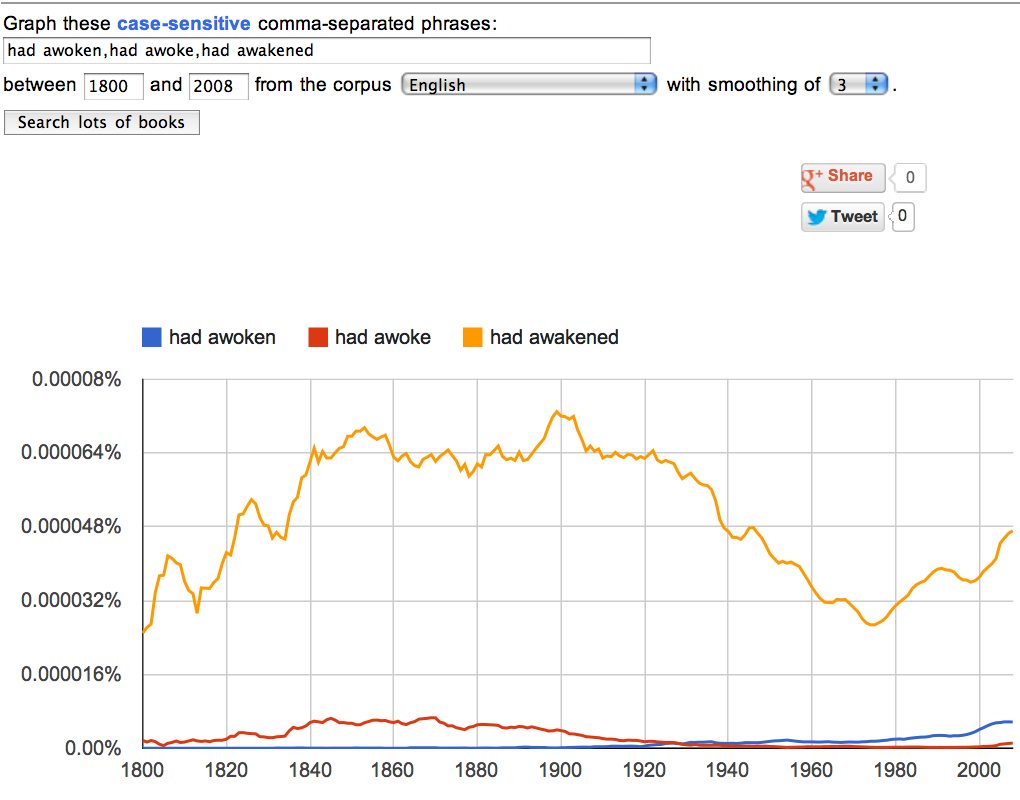 Note that the now-archaic had awaked used to be dominant, but now long ago: ngram 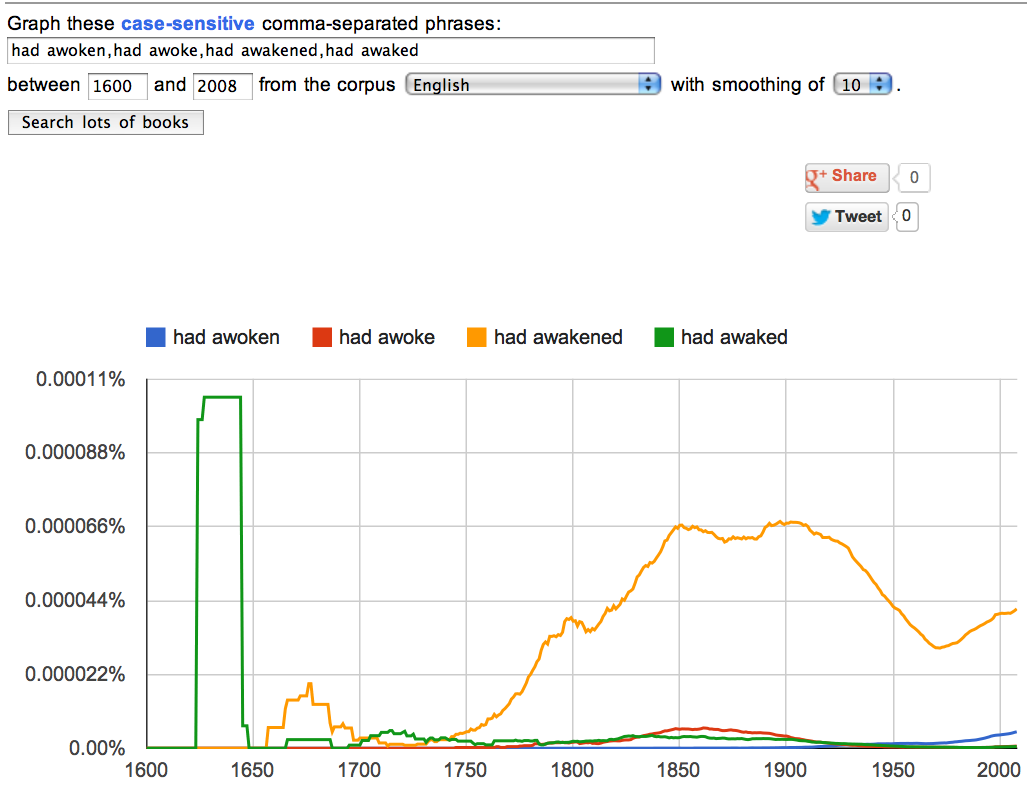 Not the answer you're looking for? Browse other questions tagged word-choice etymology verbs past-participles wake-waken-awake-awaken or ask your own question.

20
Past tense of wake: is there a difference between “waked”, and “woke”?
7
Which is grammatically correct: “woke up by the…” or “woke up to the…”?
4
A study of awake and awaken
0
Dickens (a tale of two city, chapter 1): what do “they were awake” and “was to be atheistical and traitorous” refer to?
1
Awoke or woke up vs came awake

17
Are the verbs that are conjugated to end in “-n” in the past participle related?
2
Pronunciation and meaning: “wind” and “wound”
3
Do I so often encounter simple past for past participle (e.g., “I have went,” “what was did to her”) because of where I am or when?
4
How did the expression “put the blame on” come about?
10
Recipe vs Receipt
28
Irregular verbs: the history of the suffix “-en” in the past participle
1
Do it more precise or more precisely?
0
Why don’t dictionaries have all the different forms of a word