There was the following paragraph in Maureen Dowd’s article titled, "Mitt Romney is the president of white male America” in November 10 New York Times:

Maybe the group can retreat to a man cave in a Whiter House, with mahogany paneling, brown leather Chesterfields, a moose head over the fireplace, an elevator for the presidential limo, and one of those men’s club signs on the phone that reads: “Telephone Tips: ‘Just Left,’ 25 cents; ‘On His Way,’ 50 cents; ‘Not here,’ $1; ‘Who?’ $5.”

Can you decipher for me what this line means?

Here's an example I found by googling: 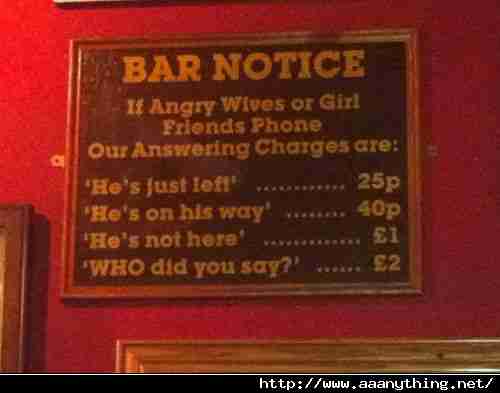 That is the kind of sign one might see in a sports bar or some other drinking establishment where men go to drink without the supervision of their wives, girlfriends, etc. It's intended to be for the bartender, indicating the gratuities he expects for each answer.

Say you're a patron of the bar. Your wife calls, and you don't want to talk to her. Bob, your favorite bartender, asks "Who?" You would be expected to tip Bob $5. Look at it as a list. For the bartender to answer "He just left" would only cost you a quarter, but that isn't as good an answer from the standpoint of someone who might not want anyone to know he had even been at the bar.

Note that this is not a real practice. It's just meant to be humorous. The macho indifference of the patrons to people calling for them while they're drinking is supposed to be funny, expressing how important it is to them to be allowed to get drunk in peace.

This is similar to the signs you see in repair shops:

Not meant to be taken seriously.

Not the answer you're looking for? Browse other questions tagged meaning-in-context jokes or ask your own question.

4
What does Mitt Romney’s “I only spent four years as a governor? I didn’t inhale,” mean?
4
What does “Somebody just can’t bake the cake,” mean? Is it a popular phrase?
1
Is “the One” self-explanatory in the line, “If 2008 was about exalting the One, 2012 was about the disenchanted Democratic base.”
0
Does "just" here mean "only" or "not for a long time"?
2
What does "Not a dream will i have left" mean?