My own understanding of the term camp followers was that it was synonymous with prostitutes who followed armies around plying their trade. However, according to Wikipedia:

Camp-follower is a term used to identify civilians and their children who follow armies. There are two common types of camp followers; first, the wives and children of soldiers, who follow their spouse or parent's army from place to place; the second type of camp followers have historically been informal army service providers, servicing soldiers needs whilst encamped, in particular selling goods or services that the military does not supply, these have included cooking, laundering, liquor, nursing, sexual services and sutlery.

ODO's BrE and AmE entries are both identical and similar to the above:

a civilian who works in or is attached to a military camp.

Webster, on the other hand, appears to concur with me:

Wiktionary offers a fence-sitting definition albeit one leaning towards my side a wee bit:

A civilian who works for a military organization, often a prostitute.

None of the dictionary entries explicitly include the families of soldiers in their definitions.

So, are camp followers all the civilians employed in the service industry who follow armies around? Or has the term dwindled to only imply those who provide sexual services? I'd also appreciate any information on the evolution of the term, if applicable.

The OED defines it as ‘a man or woman who follows or hangs on to a camp or army, without being in military service.’ Camp followers are thus not necessarily prostitutes, but this citation form 1876 suggests they might be: Those unfortunates who are known under the euphemistic appellation of ‘camp followers’.

However, as FumbleFingers has shown, the term can be used in non-military contexts in which there is clearly no improper suggestion.

The expression currently has two clusters of meaning--literal and metaphorical.

Your search has focussed on the literal meanings related to military encampments. In that sense, the term has been applied to both the families of the soldiers and commercial associates. The distinction between the two is not sharp: the widow of a fallen soldier far from home might be forced to become a laundress to support herself and her children. One category of commercial camp followers (among several others) provided sexual services.

It would be ridiculous to assert that skilled artisans such as fletchers or armorers were not camp followers (or that they were prostitutes). Your mistaken belief that there was only one category of service providers among camp followers reflects the modern trend of a professional army to create its own Ordnance Corps and similar units rather than outsourcing tasks as was common in times past.

As @FumbleFingers has noted, the metaphorical use of the expression now tends to be broad. Any attempt to limit the literal use as you suggest would be to grievously misrepresent many such uses.

As in my question, the following dictionary definitions suggest that the term camp follower has devolved into a derogatory term synonymous with prostitution.

Wiktionary offers a fence-sitting definition albeit one leaning towards the derogatory a wee bit:

A civilian who works for a military organization, often a prostitute.

While there are plenty of references in Google Books that only include prostitutes as a subset of camp followers, there are a number of others such as the ones below that either equate the two or suggest that they are commonly equated with each other.

From A to Z of Women in World History by Erika A Kuhlman, PH.D.:

The tradition of camp followers dates back at least as far as the Middle Ages (800–1300). Most camp followers were women who wanted to join their husbands in battle. Typically, camp followers performed wifely duties at camp, such as cooking meals, washing clothes, obtaining water supplies, and treating wounds. Generally, wives took care of their own families (they often brought their young children with them), not of the whole company. The term camp follower also represents the women who travelled with the military and worked as prostitutes.

From Women In Early America: Struggle, Survival, And Freedom In A New World by Dorothy A. Mays:

To modern ears, the term camp follower implies a derogatory connotation far from the actual experience of camp followers during the American Revolution.

Camp followers, in the broad sense, are simply prostitutes who gather and operate where large numbers of soldiers, and other servicemen are stationed, and who serve principally the sexual needs of those males, although civilians are seldom discriminated against.

Following emergence from the Dark Ages, and the commencement of feudalism in medieval Europe, prostitution once more began to thrive. This was seen especially in the rise of the so called 'camp followers'—large groups of prostitutes who travelled with pilgrims, went on Crusades and marched with a variety of armies cross Europe. These camp followers, like a macrocosm of the single prostitute, were fulfilling the functional needs of a variety of temporarily misplaced males.

From Sex in China: Studies in Sexology in Chinese Culture by Fang Fu Ruan:

From Encyclopedia of prostitution and sex work: A-N edited by Melissa Hope Ditmore:

"Hog ranch" is a term that was used particularly in Wyoming and parts of Colorado for combination saloons/dance halls/brothels serving military outposts in the 19th century. A limited number of women were permitted association with the daily workings of the camp, and most camp followers (prostitutes) were excluded from the post proper.

From Prostitution and Sex Work by Melissa Hope Ditmore:

Camp followers, including laundresses and seamstresses, typically sold sex or offered situations akin to serial marriage at the garrisons.

From Hotel Ritz: Comparing Mexican and US Street Prostitutes by David J. Bellis:

Various terms have been used to label commercial sex workers, including harlot, hooker (after the "camp followers" of General Joseph Hooker during the Civil War), prostitute, whore, stroller, and streetwalker.

The commander's periodic purge required the discrediting of women who followed and serviced the troops, for it was far easier for commanders to send the women out of camp if they could be portrayed as rootless, promiscuous, parasitic, and generally a drag on the military's discipline and battle readiness. Thus camp follower was commonly equated with prostitute.

Ugo Pirro's 1958 novel is about a WWII Lieutenant Martino and his men who are assigned to lead a group of prostitutes through the mountainous ways to serve in brothels for Italian soldiers in Albania. It is titled "The Camp Followers": 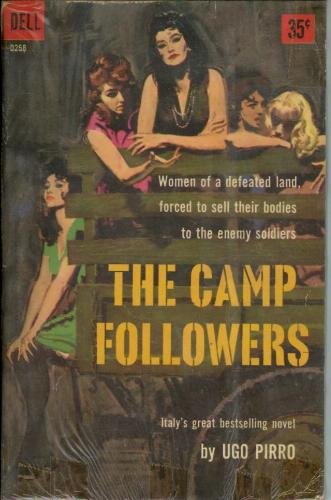 The book was adapted into a film in 1965 and released to English audiences as "The Camp Followers".

In summary, even if the term camp followers is not ubiquitously synonymous with prostitutes, there's a significant sub-section of the English-speaking world which does. The presence of entries in respectable dictionaries further confirms this fact.

The reason that the term "Camp Followers" has become so synonimous with "prostitute" originates in the civil war with Joseph Hooker, a general in the Union army who was known for allowing his troops to consort with prostitutes and for allowing them to follow his army. The term "Hooker" did not originate with him, but it certainly became popular because of his reputation. In actuality, camp follower is just an expansive term for a civilian who preforms duties for an army- usually cooking, laundry, nursing, cleaning, ssuttling, wagon driving and other non-combative chores that would otherwise take soldiers away form actual soldering. Personal servants and slaves also fell under the umbrella term of "Camp Follower." A good resource for Camp Follower related info is Holly A. Meyer's book "Women and Wagoners: Camp Followers in the American War for Independence." (also where most of this info comes from)

Perhaps you are confused by the phrase "as an X"? That means "such as an X", not "equals an X".

Camp followers provided nursing care for the wounded, laundry and mending for officers and troups, cooking for a group of soldiers and etc. The inference that all camp followers were prostitutes is laughable. Probably due to our own misunderstanding of a life where manual labour was unending and the importance of respectability greater than now.

When the army moved men often brought along their families (wives, children even parents). The British army had official numbers of people who were allowed to follow the regiment. For example when the regiment was in barrack accomodation the Sgt. was allowed to have a separated quarter for himself and his wife. This may have varied from regiment to regiment but certainly existed in North America. The idea that the Sgt's wife prostituted herself does not fit with the understanding of the type of man who would rise to Sgt. level.

There were certainly lots of people who followed armies both male and female. The fact that they appear only marginally in record of battle (e.g. the trader asked to carry messages to the troup opposite by Wellington) does not mean they are venal.

Not the answer you're looking for? Browse other questions tagged meaning etymology terminology military or ask your own question.

2
What is it called when an improper meaning becomes the only meaning of a word?

9
Why are bacteria referred to using botanic terms (flora, blooming)?
1
At this point, are “military” and “armed forces” synonymous?
3
Difference between “encampment” and “camp”
1
“Elves and Men, the Firstborn and the Followers”
1
Is there a word for women who use prostitutes?
2
Meaning of “rendition” in the phrase “rendition camp”
6
What are the origins of the phrase “field day” as used to refer to cleaning of a military barracks?
6
When did “escort” become an euphemism for prostitute?
0
What does “Camp mayor” mean?