Meaning of “Be Mr Late Better Than Late Mr”

Not long ago I found on the Internet a lot of different road signs from India. Here is one of them:

It says: "Be Mr Late Better Than Late Mr". I can't understand the meaning of this phrase. I understand that it's some word play but can't catch the idea.

Can you explain this to me?

It is a road sign that is meant to implore drivers to slow down.

In this case, being "Mr. Late" means that you are habitually late. In other words, you are late so often that it may as well be your name.

Being "late Mr." means that you are dead. For example, someone might refer to "the late Mr. Smith" if they were talking about someone named Smith who died recently. (see definition 2a here: living comparatively recently : now deceased)

So, all together, the phrase is advising you that it is better to be late, even if it means you are known as that guy who is always late, than it is to speed and risk getting killed in an accident.

So that you can see it in context, here is a photo of another road sign with a similar expression: 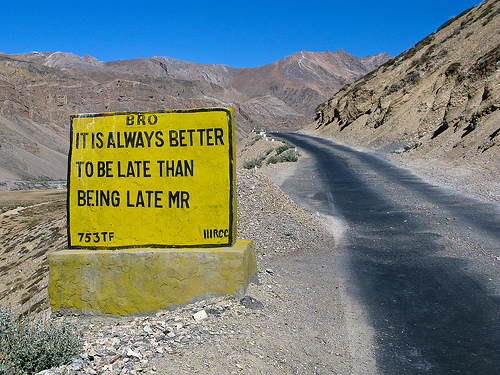 The phrase is in an Indian ideolect, so it's not "standard" English. It can be dissected.

"The late Mr Jones" indicates that Mr Jones has died. This is the meaning of the final two words.

"Mr Late" is used rather like a nickname — someone who is delayed and has missed an appointment.

The whole thing means "Arrive behind schedule, not dead", and is an exhortation to slow down rather than be killed in an accident because of excess speed.

It's a play on the word late which can have multiple meanings:

By the above definitions, the road sign can be interpreted as,

Driving slowly and arriving late is better than driving fast and "arriving" dead.

Not the answer you're looking for? Browse other questions tagged meaning signage or ask your own question.

18
Origin and meaning of “You catch more flies with honey than you do with vinegar”
0
The meaning of “…Identity between”
1
put data to the idea
0
What is the meaning of 'plain' dangerous?
0
What does it mean “Leaping into saddle as she ran”?