Which of the following is grammatical?

It seems as if it could be them as an object of be.

Neither of your two questions makes sense as written, and I do not know what the intent is. For one thing, I don’t understand why they are questions; they do not look like such to me.

For another, the formulaic “be they X or Y ”, using present subjunctive and inversion as it does, is of a somewhat elevated register which may not be appropriate for all circumstances. It has a slightly musty aroma of littérature to it, as of a sweetness possibly gone slightly off. The use of the somewhat colloquial lollies seems to fight against that register. It is an odd mix.

Here are some alternate wording you may wish to consider, depending on your actual intent. 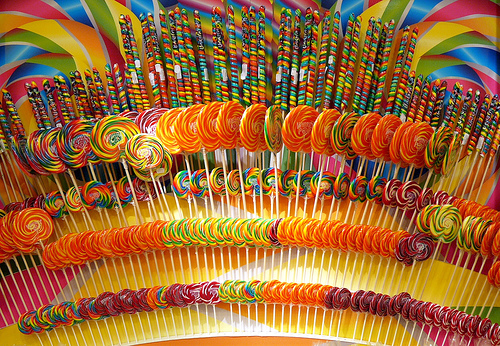 Disjunctive Concession, Inversion, and the Subjunctive

As for the use of the present subjunctive in be they red or blue, that is called disjunctive concession, and it is in Contemporary English considered a literary style seldom heard elsewhere. In his monumental work, An Historical Syntax of the English Language, Visser has this to say about it:

The modally marked form is used in Old, Middle, and Modern English in clauses of disjunctive concession or alternative hypothesis. In Present Day English mainly literary.

I strongly advise you not to attempt to affect a literary register, let alone one that risks being perceived as archaic or poetic when that is not the intent, because I do not believe you yet have sufficient command of English to credibly pull it off.

Here, however, are some examples of authors who did do so. You might compare your writing with theirs and decide whether you write like them. Or should.

Be thy mouth or black or white,
Tooth that poisons if it bite;

No more of your guests, be they titled or not.

‘As for me,’ said Imrahil, ‘the Lord Aragorn I hold to be my liege-lord, whether he claim it or no.’

For Turgon took great liking for the sons of Galdor, and spoke much with them; and he wished indeed to keep them in Gondolin out of love, and not only for his law that no stranger, be he Elf or Man, who found the way to the secret kingdom and looked upon the city should ever depart again, until the King should open the leaguer, and the hidden people should come forth.

1981 Gene Wolfe, The Claw of the Conciliator

“Welcome visitors and fellow villagers! In the time it takes to draw breath thrice, you will see us smash this barrier and drag out the bandit Barnoch. Whether he be dead, or, as we have good reason to believe — for he hasn’t been in there that long — alive.

“When we still kept the Old Way, lived by the axe instead of the pick, taking what we would, be it wealth, women, or glory.”

So yes, the form undeniably exists, although used differently than you attempted. But no, I don’t think it works in what you are trying to write, especially where you attempted to use it.

Finally, you will notice how even in my own examples, I held off from using that form until the final, somewhat florid example. Are you writing like that?

The verb be does not take an object. It has a subject and a complement, not an object.

Consequently *be them cannot be correct.

Not the answer you're looking for? Browse other questions tagged grammaticality pronouns subjunctive-mood grammatical-case subject-verb-inversion or ask your own question.